This project has been 9 months in the making for various reasons. It's my old steel race bike that was sitting semi-built doing nothing under a sheet in the house with a cracked chain stay. After completing my C60 build earlier in the year I looked into getting this bike roadworthy. The budget quickly spiralled way out but that wasn't really the point of this rebuild and the end result is exactly as I imagined prior to starting. The first problem was deciding who to use to repair the frame. Dave Lloyd built the original to my spec back in 1991. For those that don't know he was a pro back in the 70s and 80s and was prolific in time trials in the UK. He subsequently went into the frame building business and was most well known for his concept 90s frame that had, shock horror, a sloping top tube! His thinking was that it would make for a tighter rear triangle and hence a stiffer frame. It looked a bit weird for the time and was certainly an acquired taste and not one I liked so went for the traditional look. I don't know when he packed up the frame building probably when he realised that no one was making any money out of it and he went into the coaching business http://www.davelloydcoaching.com/.

It's a 55cm seat tube, 57cm top, 72.5 degree seat angle, 73 head, 4.3 cm fork rake (it's a retro frame I'm giving retro measurements!). This gives a wheelbase of 100.5cm which is relatively long to most modern day frames but very close to my Look KG261 and only tiny bit longer than my C60 so this is why people rate the ride quality of the C60 how it handles just right and is a really stable frame at speed.

Onto the refurb. I eventually chose Ellis Briggs http://www.ellisbriggscycles.co.uk/ to do the repair. The plan was to replace the stays and tweak the rear end a few mm to be able to accommodate modern 11 speed kit. It was rechromed as the original and then resprayed. The colour is a lighter than the original metallic red and officially is a polychromatic red. I don't think that's evident in any of the pictures but on looking closely there are pinky/purple sparkly bits in the paint. I have to say it's fairly rubbish and the effect is nothing like the original colour swatch but as a red it's much more vibrant than a plain red and I'm fairly happy with it overall.

The components are a mix of what was on the bike originally and modern day 11 speed. It was essential I had silver components. I did consider Potenza but I don't like the 4 arm crankset and didn't like the mix of black and silver on the ergolevers and front/rear mechs. It wasn't hard to source silver Athena which dates back to 2015 when they stopped making it. The wheels are current Campagnolo record hubs that were black anodized. My wheel builder (Jonny at Nobel Wheels http://www.noble-wheels.com/) strips them down, removes the anodizing and polishes them back up with shield logos applied and then builds them from there. With the new Mavic open pro rims completes the retro/modern look as this bike had the original open pros on them.

Frame made from Reynolds 653 tubing as described above.
Campagnolo Athena drive train from 2015. Crankset with 53/39 rings. The spider is smaller for the compact rings and it doesn't quite look right plus I don't need it
Athena ergo levers modified with the post 2015 brake hoods from chorus/rec/super as they look and feel much better
Chorus 11 speed cassette 12-25
Chorus 11 speed chain
Delta brakes
C record aero seat post
Chorus threaded headset
Cinelli 66-42 bars which are the deep drop Eddy Merckx ones
Cinelli xa stem
San Marco aspide supercomfort racing saddle
Time speed pedals. I wanted the white ones as they match the original Time equipe mag pedals I had on. They're only 10g heavier per pedal over the black carbon ones
Double wrapped bar tape with cinelli cork ribbon base and gel cork ribbon over the top
K edge chain catcher and garmin mount
Campagnolo record hubs with Mavic open pro 2017 rims sapim CX-Ray spokes
Veloflex master 25mm tyres with Vittoria latex inner tubes
Elite ciussi bottle cages

Think that's the lot! Gives me a total weight of 8.6kg which comes out only around 3lbs or so heavier than my C60 with super record/bora etc If I had my time again I would seriously consider ditching the C60 frame and getting a bespoke steel frame. Carbon can't get close to the detail that a custom made frame has. 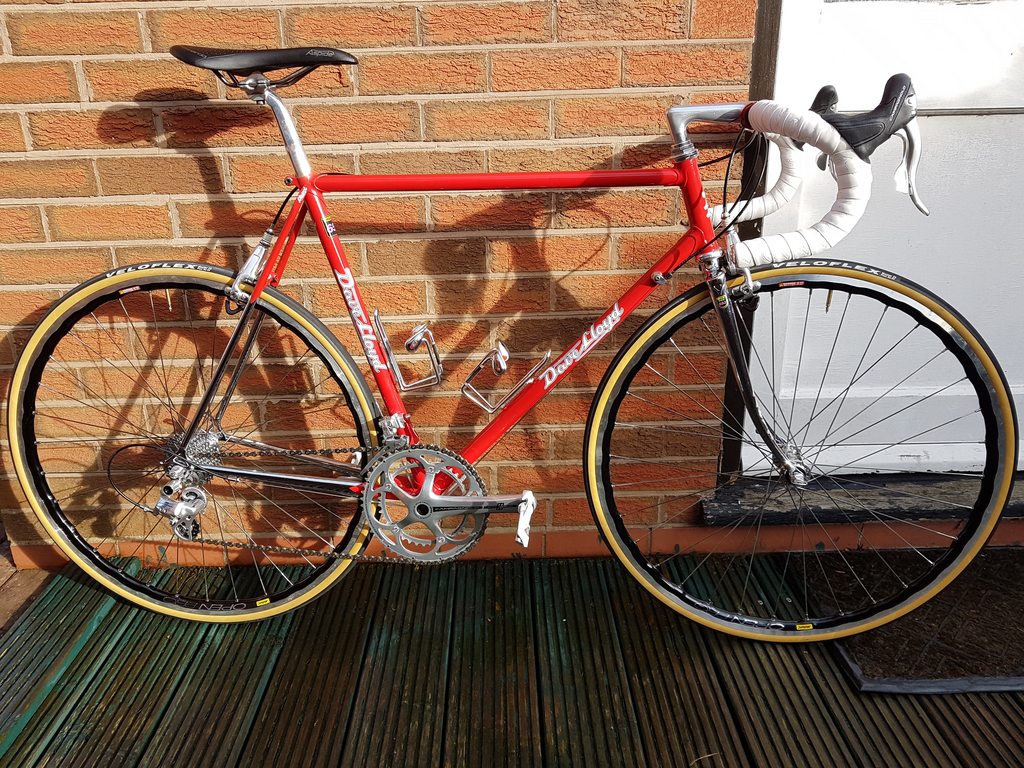 Replaced the original hoods for the chorus/record/super ones. Double wrapped bar tape 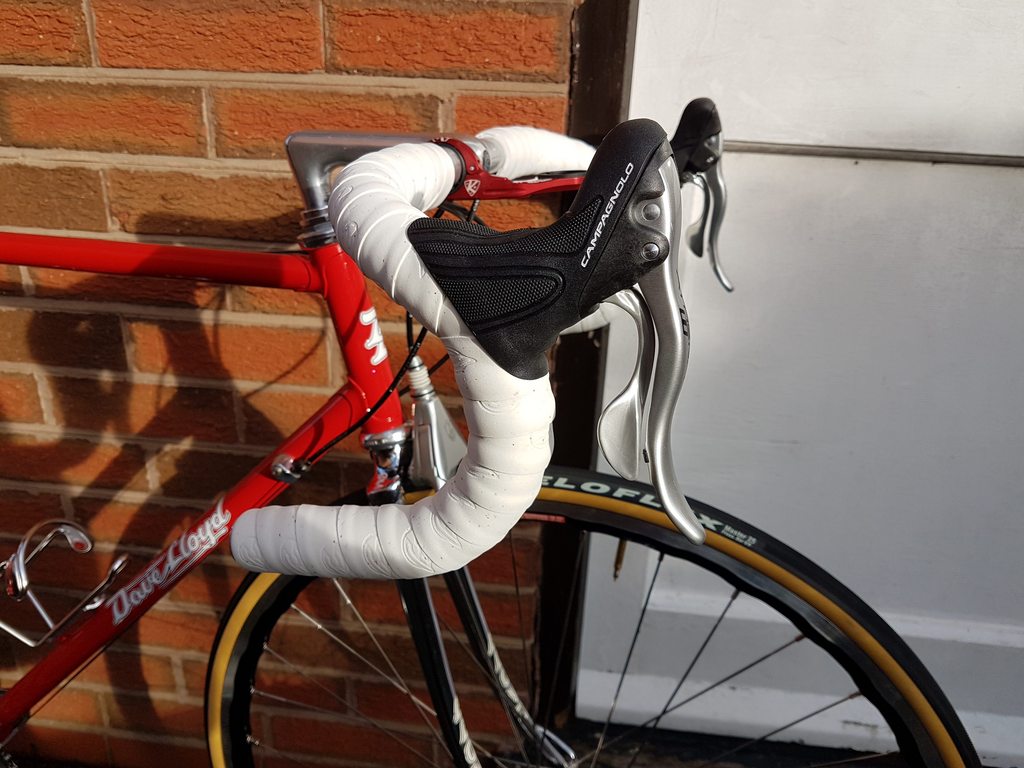 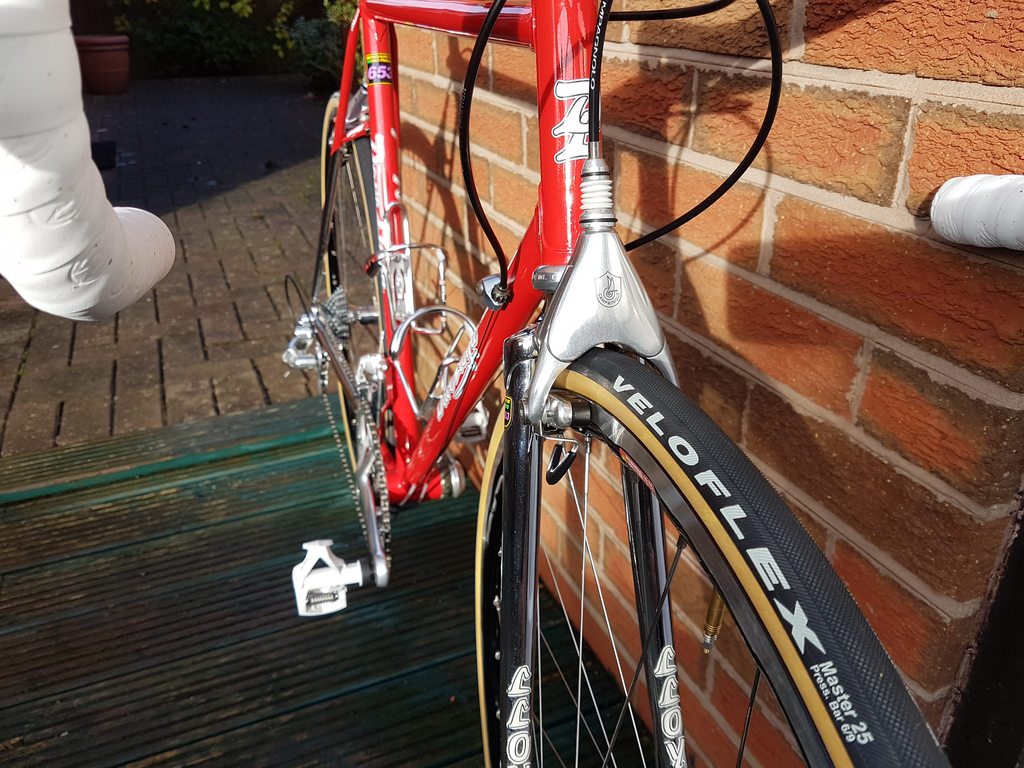 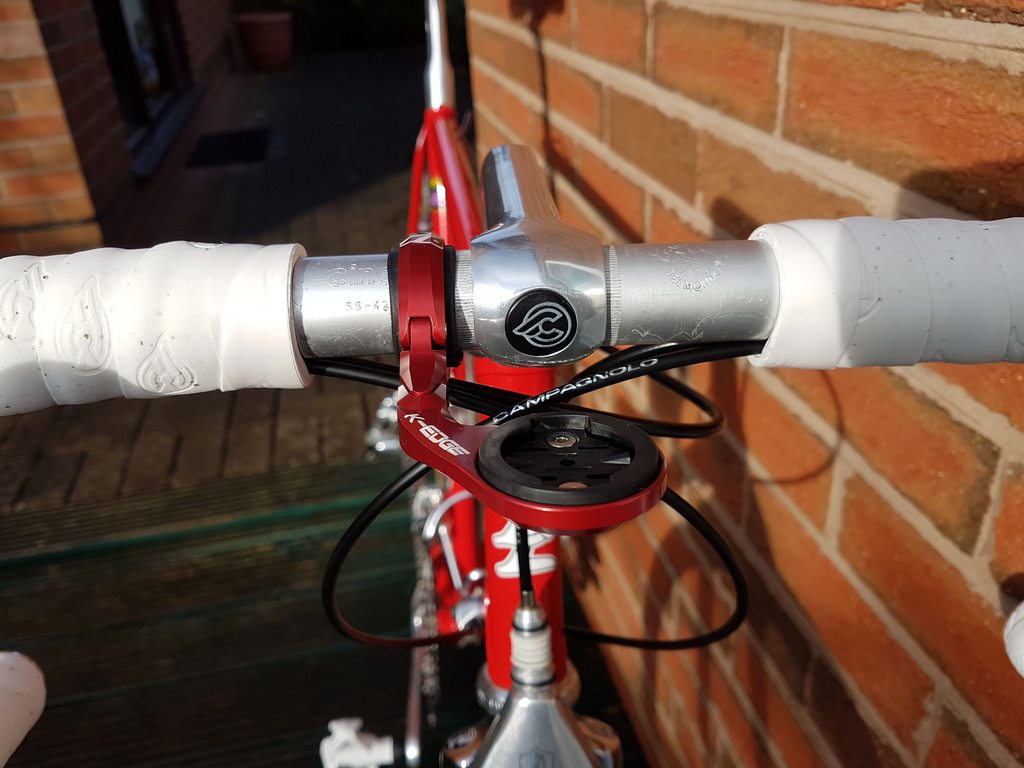 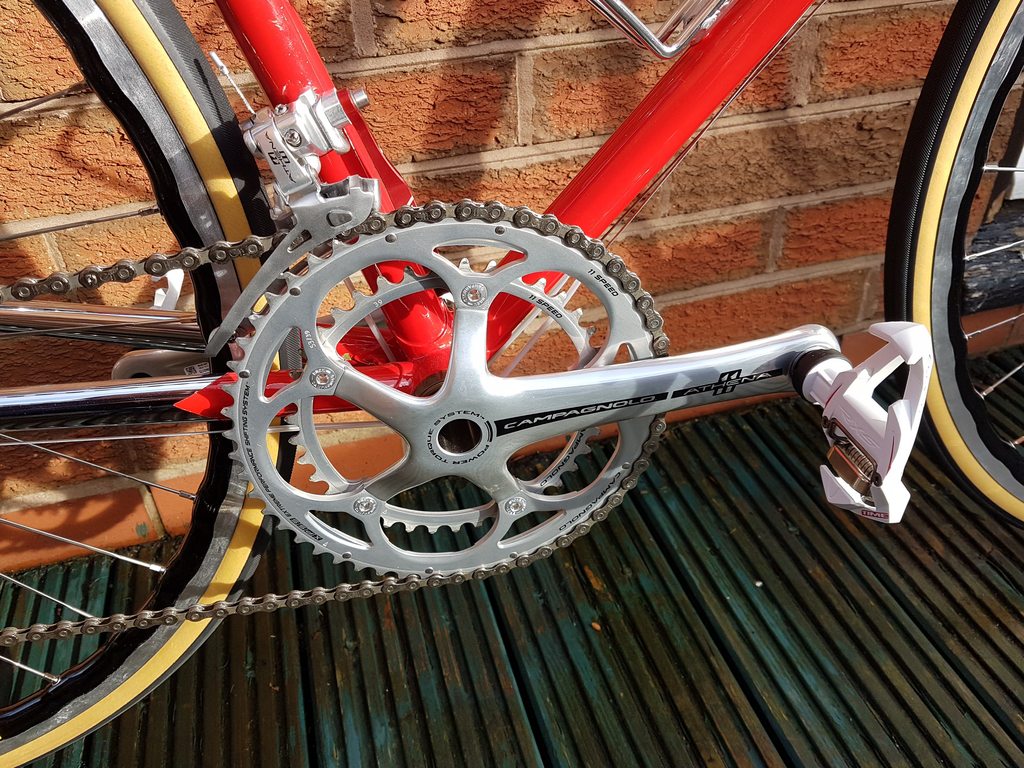 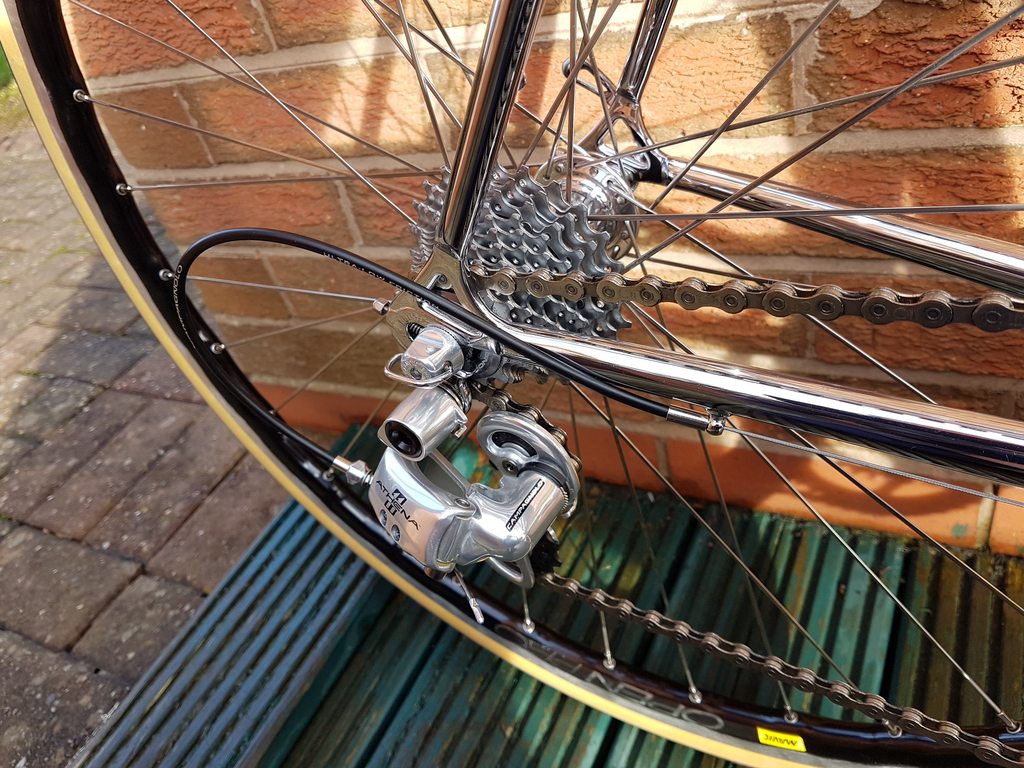 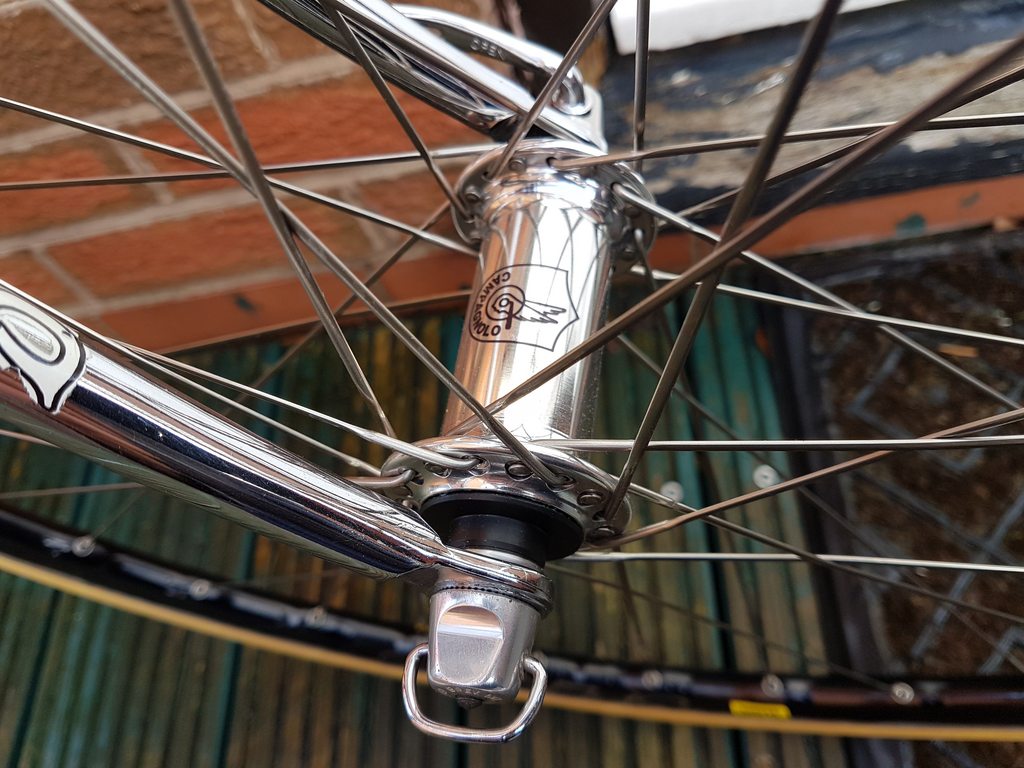 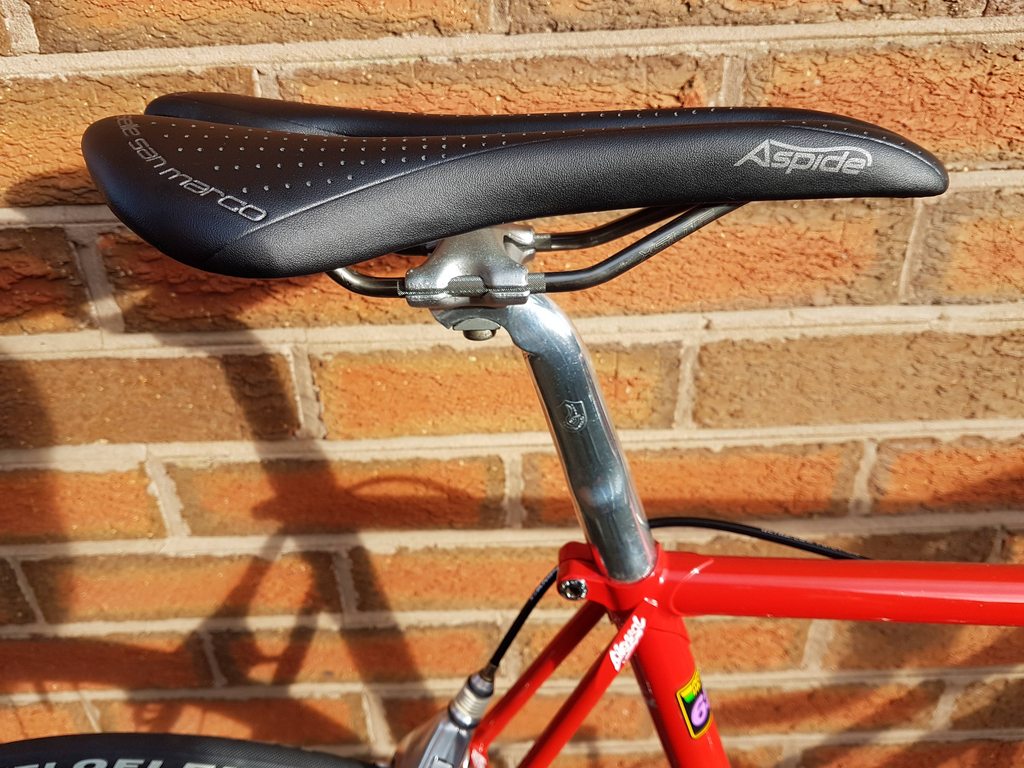 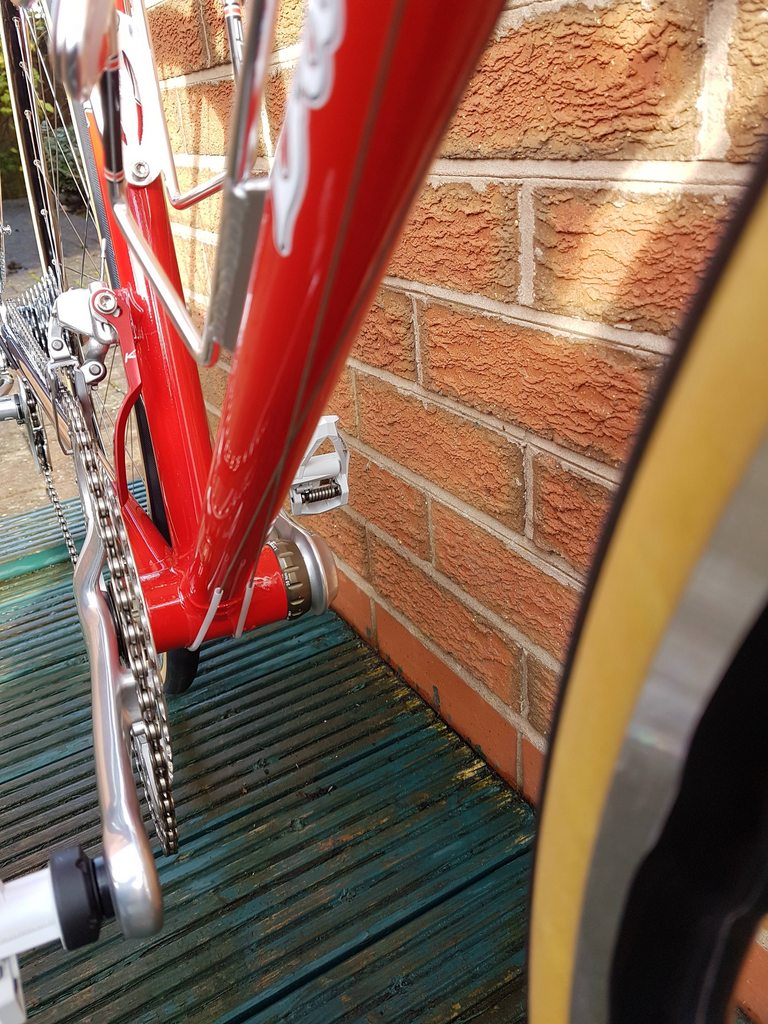 V brake bridge and engraved stays both painted in. The kind of detailing the boring and generic carbon frames can't get close to 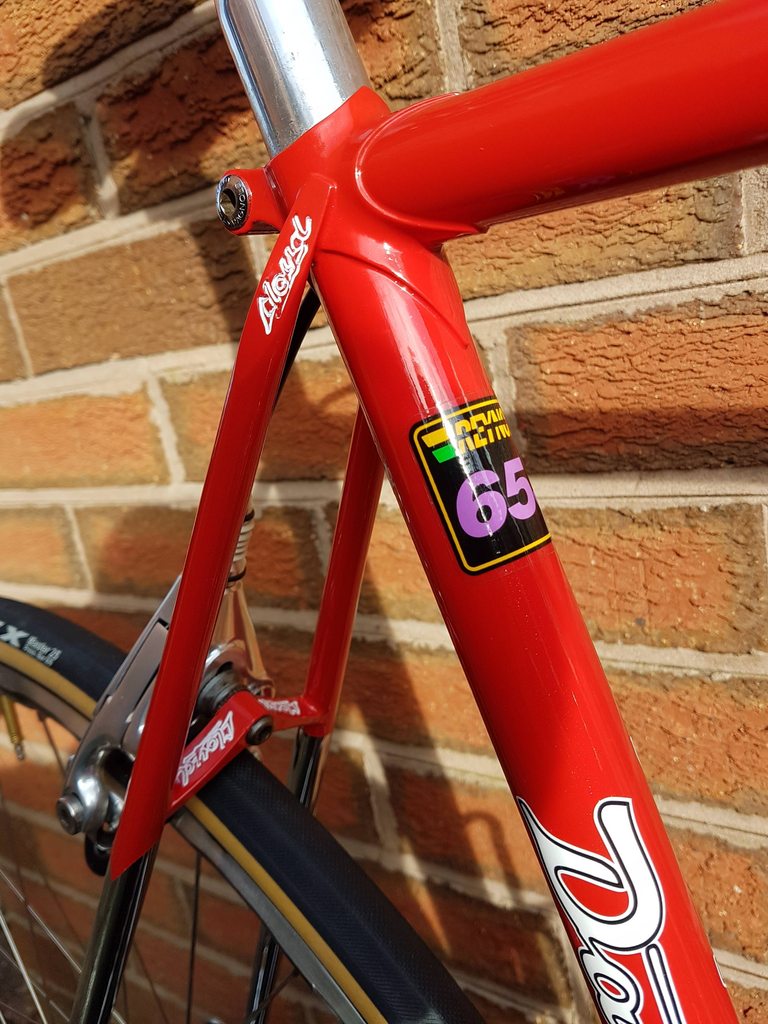 Great build thread. Like the story and description of your thought process during the project. Hubs look fantastic, but with all the anodization removed I’m wondering if the alloy won’t be subject to fairly quick oxidization etc? And how did you get the logos on the polished hubs like that. Looks sharp.
Colnago C64 - The Naked Build; Colnago C60 - PR99; Trek Koppenberg - Where Emonda and Domane Meet;
Unlinked Builds (searchable): Colnago C59 - 5 Years Later; Trek Emonda SL Campagnolo SR; Special Colnago EPQ
Top

That's a beauty. Congrats!
What is the clearance of your Delta brakes with 25mm Veloflex? It seems that cannot use anything bigger than 23mm in my Master x-light (Delta brakes also).
My 6284gr TIME Alpe d'Huez
My 10012gr COLNAGO Master X-light
Top

Calnago wrote:Great build thread. Like the story and description of your thought process during the project. Hubs look fantastic, but with all the anodization removed I’m wondering if the alloy won’t be subject to fairly quick oxidization etc? And how did you get the logos on the polished hubs like that. Looks sharp.

It's been 3 months since the wheels were built and there's no sign of any loss of polish though it hasn't been ridden yet or washed! My feeling is they'll be similar to the old polished campag hubs that just needed an annual metal polish on them to bring them back up to scratch. Not sure about the logos they're not simple stickers that will peel off in no time but do seem like they'll be pretty durable.
Top

kgt wrote:That's a beauty. Congrats!
What is the clearance of your Delta brakes with 25mm Veloflex? It seems that cannot use anything bigger than 23mm in my Master x-light (Delta brakes also).

Thanks for the comment! I've got 5mm clearance on that so they'd take a 25mm conti/vittoria on the same wheel. But as you know with delta's you can physically raise and lower the height of the brake and I have a bit of play in there. My bora with 23mm vittoria g has got 3mm clearance so they'd take 25mm with a raising of the brake based on that wheel which is a c17 compared with the Mavic which is c19.
Top

IMHO the best looking calipers were the silver records from 10spd era, the rear one (single pivot). The rear could be mounted at the front with a longer nut

But this build is astonishing!

why are the cables crossed below the downtube btw?
Top

vejnemojnen wrote:IMHO the best looking calipers were the silver records from 10spd era, the rear one (single pivot). The rear could be mounted at the front with a longer nut

But this build is astonishing!

why are the cables crossed below the downtube btw?

Thanks very much, delta's were the dream brakes when I first started cycling when style and over engineering were the order of the day. Before the obsession with weight.

The cables have to be crossed as they're backwards up top! If you notice the right ergo cable goes into the left downtube shifter adjuster and vice versa. The natural way was to put the right hand cable into the right hand one but it means it scrapes across the head tube and the cable also has to twist a lot more so might increase internal cable friction. I could put frame protection on the headtube but a much better way is to put them in opposite sides so there's a smoother sweep of cable, it misses the head tube, but means the cables then need to cross under the downtube. If you've got internal gear cables like most frames these days then it's not an issue they can cross inside the tube. In fact that's what Colnago recommend for the C60. But where they're exposed they have to cross.
Top

Agree, only those who started cycling in the 90s can understand why Delta are pure items of desire. Back then it was the sexiest, most exotic component one could have. The second sexiest one was maybe the c-record crankset.
My 6284gr TIME Alpe d'Huez
My 10012gr COLNAGO Master X-light
Top

I love this bike so much, and it's so light! Looks awesome, I might try the crossed cable technique next time I recable mine as the headtube is getting a bit of rubbing and the frame protector stuff just doesn't look right.
Top

...really beautiful build of a classic steel frame. However, I am having trouble reconciling the claimed weight with the build. I know that 653 tubes often yielded frames in the 1900 grams range, but when you consider your Mavic clinchers, Deltas and other build choices, I don't see how your build amounts to only 7.8 Kg...?

Agree with the above comments, that is so cool....... Maybe my old steel Peugot may get some love one day

I would be highly impressed if this is below 8.5 kg, but who cares!
It is stunning and a really thoughtful build.
Well done.

Stolichnaya wrote:I would be highly impressed if this is below 8.5 kg, but who cares!
It is stunning and a really thoughtful build.
Well done.

Thank you very much. You may be right with the weight. It was just weighed on the back wheel on a set of scales in the same way my C60 was weighed. That came out similar to others so it might be half a kilo here or there. I know that's the end of the world for many on here who deal with 0.1 of a gram weight savings but each to their own I'm happy
Top
Post Reply
32 posts