Only problem I had was adjusting the calipers so that the break shoes wouldn't rub against the fork/frame to allow for more clearance for wider rims (25mm across). Took a lot of tweaking to get it right but it worked out in the end. Maybe I was just being a noob having no experience with DM brakes before

That slr01 has perfect combination of color. I really like it.
I think new slr01 is one of the most advanced bike, also it has unique and beautiful design.
How about Osymetric chainrings? dont you have any shifting problems?
Top

Chans1ee wrote: ↑
Sun Jan 07, 2018 7:39 pm
That slr01 has perfect combination of color. I really like it.
I think new slr01 is one of the most advanced bike, also it has unique and beautiful design.
How about Osymetric chainrings? dont you have any shifting problems?

No shifting issues, I think they solved that problem pretty early on when they added guiding rails to them (they didn't have them in the first iteration). The huge drop in height throughout the pedal stroke makes it so that the chain can sometimes rub the bottom of the front derailleur cage when you're in the little ring if you aren't careful with where you're at on the cassette though. They're also 50 or so grams heavier than normal DA rings. Another thing is that it's pretty weird to use them after being on round rings for a while, feels like you're pedaling in squares at first.
BMC Teammachine SLR01 (2018)
BMC Roadmachine 02 (2017)
Top

How do you like the FLO 45’s on the Team machine?
Top

tbh haven't been on them much at all. I used my chinese clinchers on them the few times I took it on the commute (wider & with tire liner) so can't comment on the FLOs. Been in the pits of pacific northwest fall/winter rain & cold season so the BMC has hardly seen any riding

. Rightly so, I should say--the Altamont Ceramic Lites have taken a huge toll apparently with the ceramic coating completely gone by now and it's only been ~3 months. If I end up keeping the same commute next fall/winter I might be on a disc bike instead..
BMC Teammachine SLR01 (2018)
BMC Roadmachine 02 (2017)
Top

After 1700kms on this thing I finally got around to taking a decent picture of it. Updated my phone to an S9 and which finally gives me access to a non-potato camera (though from how the pics came out it looks like I need to turn off HDR). Here's a pic with my commute wheels (40mm chinese carbon clinchers with Mr Tuffy tire liner.. I know, I know, but the stuff just works for me around here).

Few tweaks I made: 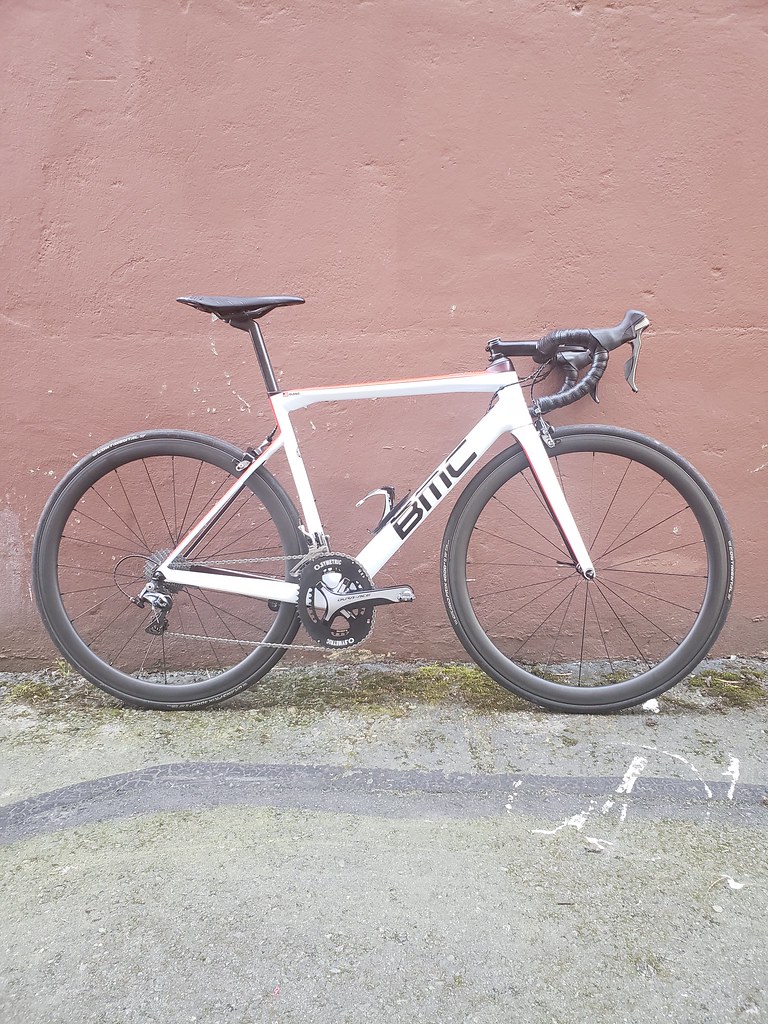 Also retired the steel bike, parted it out and replaced it with a new dedicated wet/weather bike: 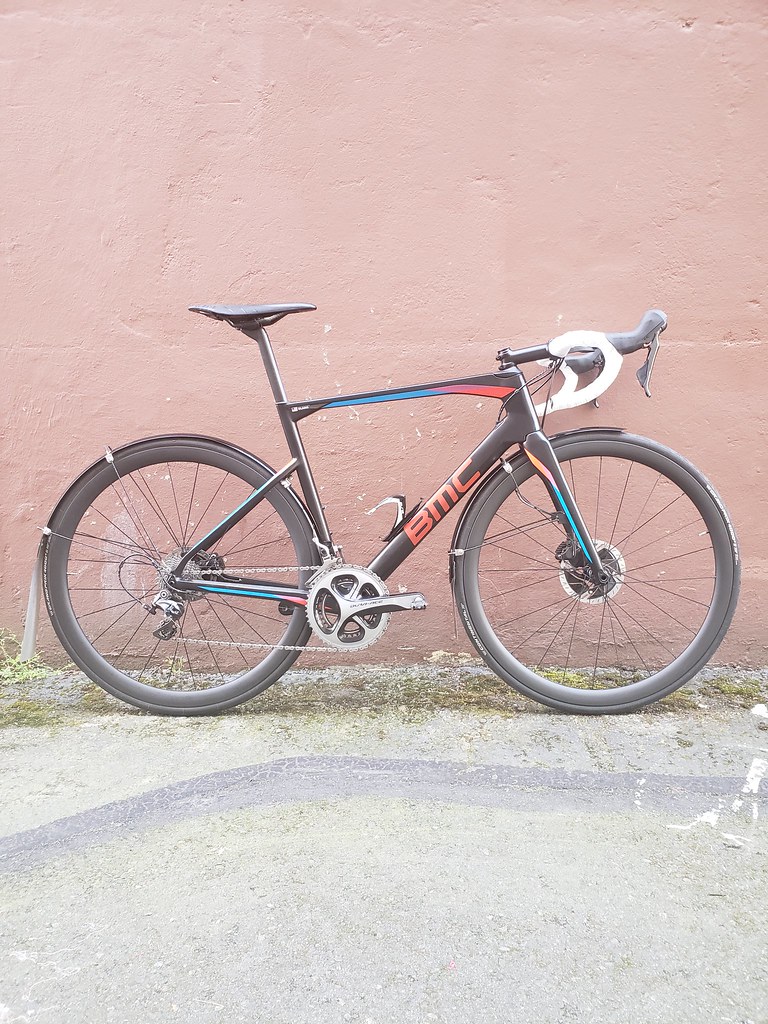 Didn't really intend to double up on BMC bikes but it just sort of ended up that way, the RM02 ticks all the boxes for the perfect weather bike

The shop that sold me the Teammachine frameset-only back in October told me to go away when I asked to do the same for the Roadmachine, so I ended up asking the other BMC dealer around here which also declined BUT was willing to work with me when I asked if we could treat it as a custom build. They offered a 50% return on all the parts I wanted to swap out (which was virtually everything). I couldn't be bothered with reselling the stuff so I took them up on it, had them order and install a new set of Fizik Chameleon bars, DA9120 shifters & 9100 rotors/calipers, then took it home and assembled it with the DA9000 drivetrain and saddle from the steel bike. Wheels are light-bicycle CX36 (21mm internal, 28mm external) with Conti GPS4KS2 25mm tire on them (with tire liner inside). Also replaced the DT Swiss QR axles with ones from Robert Axle Project which ended up only shaving a tiny bit of weight (~20gs).

Weight as pictured with the head unit is 8.1kgs at size 54. With the low headset cone, the drop is actually lower than the Teammachine if I used the same -17D 110mm stem so I had to put on a -7D one to get it to just about the same as the Teammachine

I’d imagine if you measured the actual stack on the roadmachine with the low cone, it’d be surprising low.
BMC Teammachine SLR01 Disc
Top

Did some weight juggling to get more aero. Not the most flattering pic but haven't taken this one outside much due to the weather: 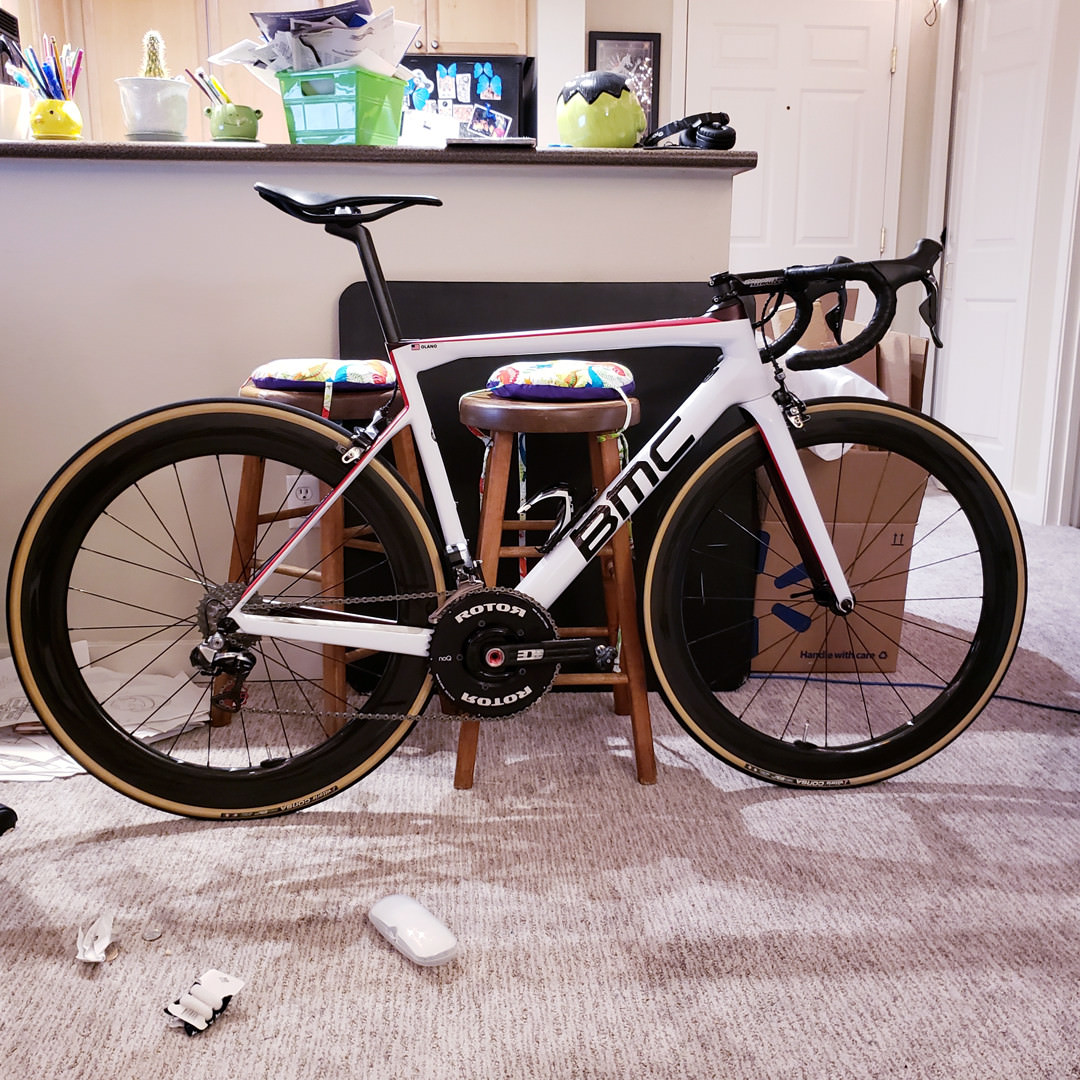 Before the changes it was around 6.6kg after I ditched Osymetric and went back with the DA9000 rings. Now it's 6.975kg as pictured with the Wahoo and 1x bottle cage. The Corsa's are a weight penalty compared to Conti GP4000s and I kept the tubeless tape the rims came installed with and used butyl tubes when I got them so I should be able to shed ~100g when I put veloplugs & latex tubes on.

The biggest weight penalties were the Rotor+P2M which was around ~200g heavier than the DA9000+Stages, followed by the ENVE Aero bars weighing ~40g or so heavier than the Fizik Cyrano 00 bars but functionally I'm pleased with it. Having the flat aero bars wrapped up is such a nice thing to have when you're just cruising on the flat (or on the trainer) while resting your forearms on it with the pseudo-aero-cancellara position. EE brakes would put me back in the semi-WW gang but atm I don't feel like trading the raw stopping power for extra modulation.

Also did the Di2+Enve Aero bar+Berk+HyperStem upgrade to the Roadmachine as well just in time for mucky weather season, should be able to get a proper pic for that one soon.
Last edited by bilwit on Fri Nov 16, 2018 7:13 pm, edited 2 times in total.
BMC Teammachine SLR01 (2018)
BMC Roadmachine 02 (2017)
Top

Nice rides! What’s your saddle height and drop to the bars? I’m interested in BMC but I’m really stuck in the middle of a 54 or 56...

Looks great with all the changes, especially the move to Di2. Did you get the seat post clamp sorted out?
BMC Teammachine SLR01 Disc
Top

That's a very smart build - mechanically and aesthetically. I still love my 2012-13 SLR01 but seeing yours I kind of want to sand it down to bare carbon, mask out the BMC logo and paint it white.

54cm saddle-to-bb, 57cm from tip of saddle to center of the bars.. whatever drop that makes out to be

iamraymond wrote: ↑
Fri Nov 16, 2018 1:34 pm
Looks great with all the changes, especially the move to Di2. Did you get the seat post clamp sorted out?

Not really.. pretty sure it will fall off on a ride at some point. Not sure what I can do about it. Maybe if/when I get a replacement the mold is better fitted..

I would like to see from other angles to, I'm wondering how handlebars looks from above.
Top