A few months ago I got pretty sick of the toe overlap on my Tarmac and decided that since I'm not a pro, I'm not going to race a bike I wouldn't otherwise buy unless I get paid or get it for free. I have a hip deformity called Femoral Acetabular Impingement (FAI) that is compounded by a hip fracture I sustained two years ago while riding that necessitates a somewhat unorthodox postion: cleats slammed all the way back on S-Works shoes (with mounting holes dremeled out further) and, as a result, my saddle setback is only 10.8cm with a Specialized Power. In addition, I am pretty tall with extremely long arms and run around 14-15cm of drop to the hoods. With a 56 Tarmac and 591 front center the bike rides OK, but definitely not as ideal as my 58 Felt F FRD which it replaced.

I contacted a few builders with a vague paint idea, geo concerns, and loosely what I wanted out of the bike: disc, road geo, fit as big of tires as possible. I've ridden on and raced on lots of gravel and feel that the requirements of a gravel-capable bike are so overblown that I didn't want the slow and boring handling of a true "gravel bike", but do appreciate being able to use bigger tires so it had to clear 28s. I was indifferent to material, but it had to ride like a race bike because carving turns is super fun. The geo is essentially a 58 in reach and a 56 in stack, with a bit less aggro of a front end compared to my Felt: To my surprise many of the builders were fairly unfriendly, unwilling to accept input, and really offputting. Stinner was so enthusiastic that they hit me back with a few surprises: they wanted to use the bike for their NAHBS show bike in collaboration with Enve/Mavic for their new Speed Release fork, they were more than excited to do my proposed paint scheme for no extra charge, and their stock geo could be made custom for me by simply using the headtube size of the next smallest model. I can say that after 150 emails and multiple phone calls on everything from the bottom bracket to the offset of the seatpost they have been extremely tolerant of and responsive to my analytic neurosis.

I'm pretty into Star Wars and chameleon paint so my idea was to make the bike look as if it were making the jump to hyperspace. This mock-up is very vague since it would take a lot longer to adjust the stripes and time is of the essence, but they will start ultra concentrated at the front of the bike and get smaller an more sparse at the rear. The base is a black with light silver metal flake to give it a space background and silver logos.

First the bike arrived with a broken internal di2 cable and di2 battery. The rear piston was leaky. Shimano warrantied both, so my guess is that it was not Stinner's fault. In my past experience Shimano does not easily warranty things like this. Both were replaced, but the mechanic working on the bike had a heart attack. So, I never got to ride the bike.

They didn't want to repaint unless I paid full retail My argument was that the rendering specifically said "Line spacing near solid at front" and it turned out anything but that in my opinion. The key here is "in my opinion". I felt that the pictures supported this and, in person, was not very impressed with the paint. During the build process I got a mock-up at t-minus 4 days until paint. It was nowhere close to what we talked about and James went back to the drawing board. Noting that the vector art was taking a while he said, literally "you have to trust us at this point due to time". So I did.

Most of the time it looked like a black bike with green dirt streaks on it and, as shallow as it sounds, that is not what I was hoping for nor what I would want for a bike like this. The custom paint was free, yes, but in my opinion that doesn't mean I have to accept it especially given their published 30 day guarantee. I even said I'd accept a solid color, but they insisted I pay. So, the frame is going back, getting a refund, and building up something else that will have it's own thread in May.

This is what I was told: "Custom paint is really difficult and its extremely time consuming. When doing a custom paint scheme, thats the leap of faith that both parties have to take is that it might not turn out exactly how you envisioned. What the designer/painter is thinking can be different than what client wants and vise versa. Thats the beauty of handmade. Its an expression and a concept of an idea. Unlike fabrication where there are hard fast numbers, paint is the artistic side of the build where the are some unknowns. We ran with your idea to the best of our ability, in the time frame that we had, with the people that were involved. Hence, the no charge."

I get the time involved. I'd make concessions here or there. I sat and looked at the bike for a week before I even told my wife about my dissatisfaction. But I don't agree with this sentiment. I'd rather pay for something less complex and close to what I want, than accept something free that I really don't care for. Maybe, or maybe not?
Don't take me too seriously. The only person that doesn't hate Froome.
Gramz
Failed Custom Bike
Top

Workspace looks more Paul Sadoff but Stinner's been killing it with their paint schemes. Can't wait to see that Hyperspace paint.
Top

You have the right state, I will confirm that!

I'm choosing to wait on seeing it till the show just to be more surprised by it. From what I've gathered the mask that is being used for the stripes is something they have never seen nor used on bikes and sought out just to re-create the hyperspace lines!
Don't take me too seriously. The only person that doesn't hate Froome.
Gramz
Failed Custom Bike
Top

This is going to be awesome! Looking forward to see it finished!
Top

Really looking forward to seeing this build progress. The ideas behind it resonate with me.

If it won't give the surprise away, what BB standard did you decide on to run the Hollowgrams? Will they be the purple version off the Slate to match the purple WI headset?
Top

I'd take the weight hit regarding the rotors, Ashimas are OK but my Avid HSX feel so much better.

Interested to see how she turns out. Surprised to hear that some of the builders you contacted were unfriendly. I've only dealt with one custom steel builder, but they were super accommodating straight off the bat. Of course, I expected to pay extra for detailed paintwork as the intricate patterns will take much longer to apply.

Can't wait to see her.
Top

It wasn't so much as unfriendly, just dismissive. The custom geo was a big part so I left that up to them and in a few cases it was clear that they just plugged stuff into Bike Cad and couldn't explain why they did what they did. They seemed annoyed to deal with me whereas the builder I chose was the opposite.
Don't take me too seriously. The only person that doesn't hate Froome.
Gramz
Failed Custom Bike
Top

Broady wrote:I'd take the weight hit regarding the rotors, Ashimas are OK but my Avid HSX feel so much better.

I'm still thinking of swapping to the new Hope brakes and rotors once they're out and there is some feedback and weights on em.
Don't take me too seriously. The only person that doesn't hate Froome.
Gramz
Failed Custom Bike
Top

I may well end up being a guinea-pig for the new hopes, asked my LBS to get some in for me the other day.

Had hopes for years on the MTB, never had any issues.
Top

Broady wrote:I'd take the weight hit regarding the rotors, Ashimas are OK but my Avid HSX feel so much better.

I'm still thinking of swapping to the new Hope brakes and rotors once they're out and there is some feedback and weights on em.

I run the hope floating rotors (old sawtooth pattern) - love them. I have a new 160mm front in the mail (due next week) which I can weigh when it arrives. I'm over 90kg. My 140mm Ashima rotors were perfect WW spec but lacking in the 'actually stop the bike' department. Not sure about the new road rotors are worth switching for although in the current debate on danger, I'm guessing my sawtooth pattern ones would probably upset a few people... 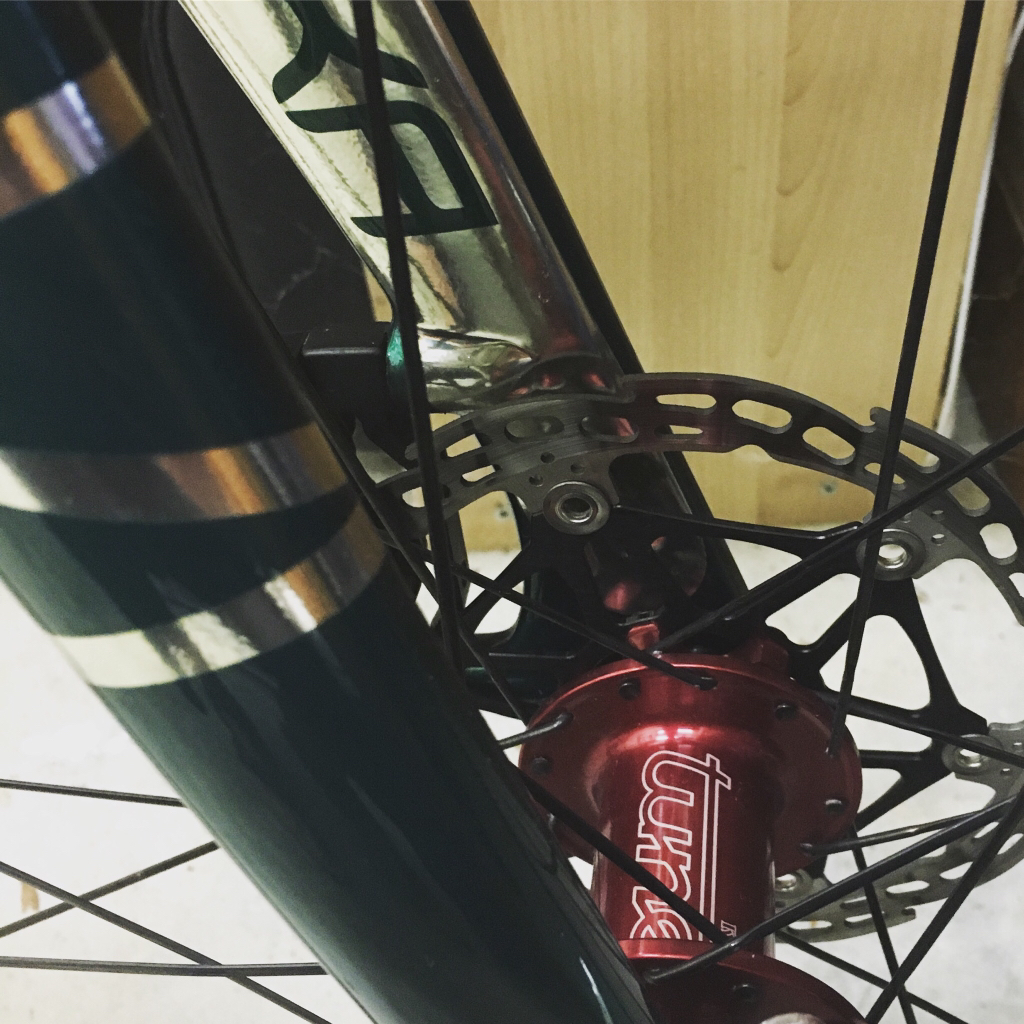 As soon as I can justify them (only just finished building my c59) I'm switching to the new rx4 brakes. Run Hopes for years on my mountain bike and need them on my Festka.

I just care about the weight. I'm 150-160lbs, I don't need tons of power. I run Formula R1 Racing with Ashima on my Yeti and they work awesome, but road disc is a new ballgame for me. I'd get the Hopes if the weight is equivalent to the 9100 calipers simply because they come in purple. As for the rotors they ain't any lighter than Icetech, so if I'm switching its to a single piece 6 bolt.
Don't take me too seriously. The only person that doesn't hate Froome.
Gramz
Failed Custom Bike
Top
Post Reply
130 posts