Without trying too hard, it's a Nice wt for a disc bike. What was yr prev canyon model?

junchen wrote:Without trying too hard, it's a Nice wt for a disc bike. What was yr prev canyon model?

Sent from my SM-G920I using Tapatalk

Hehe sorry, on Tapatalk mobile, I can't see the signatures. 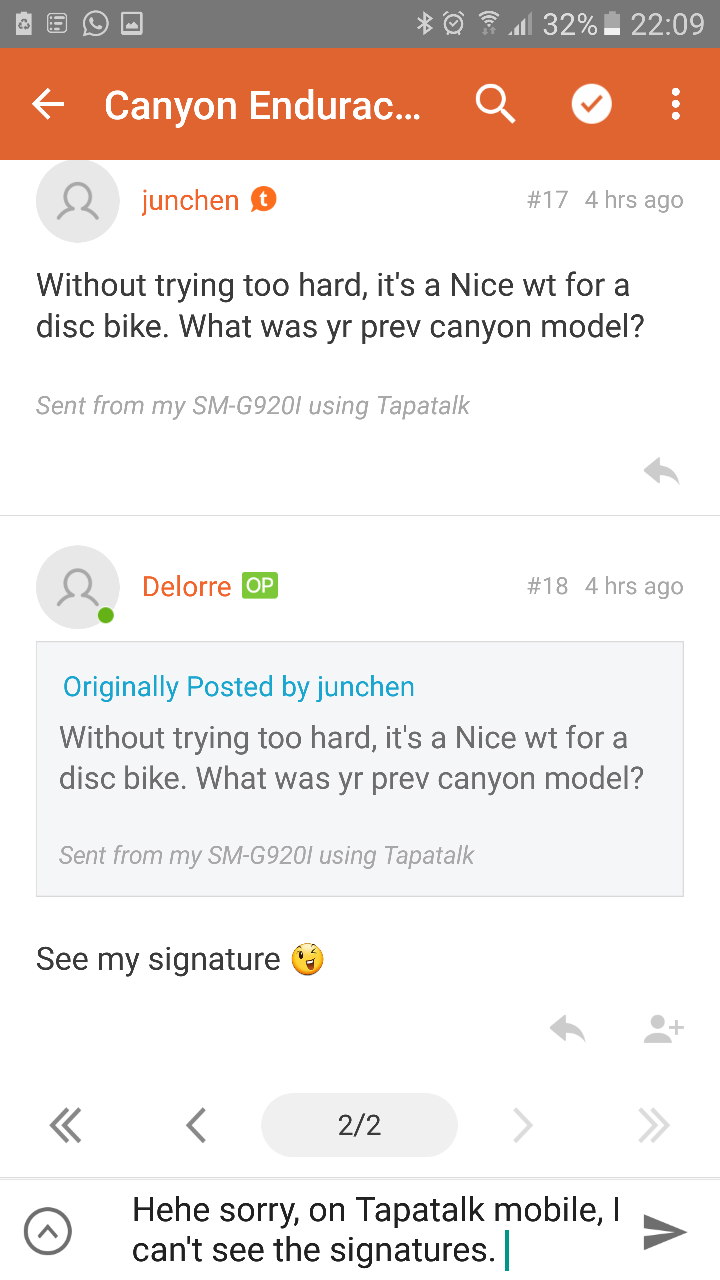 Sent from my SM-G920I using Tapatalk

Ah, I was not aware of that limitation

Bike has around 2500 miles now and has been used in all kind of winter weather, from nice dry 5°c to -8°c, almost freezing and rain, you name it. All I can say is that i've made an excellent choise with this purchase. Everything went well. Shifting, braking, all continued to work perfectly, regarless weather. Ride is stable and rather comfy considering the 23mm Conti's used. Bike is also nicely stiff, no front wobble when riding with one hand on bad roads, 0.0 front mech rub, so BB seems more than stiff enough for my max output of (only) around 1000w.

Some 500 miles ago, I finally upgrades the wheels. Nothing wrong with the stock DT wheels, but I felt some weight and responsiveness could be won by swappping them for the new Roval clx32 ones. Somes facts and toughts:

*really light at a verified 1375 gr with stock rimtape. Swappped that for Shwalbe rim tape after a few rides and lost almost an extra 40gr
*hubs with (supposed) Ceramic speed bearing are really, really smooth. Although still 'new', they spin almost as freely as my >10.000 miles Bora wheels
*seems as stiff as the DT's. I'm 70kg (155 lb), so no heavy rider, but they feel very sturdy.
*still as straigh as out of the box, even after some heavy use on some nasty cobbles and very bad Belgian winter roads
*being almost 21mm wide internally, my 23 Conti GP4000's are actually wider as my father's 25 mm conti's on old Shamal wheels

*the bike has been affected by sidewind from the beginning (due to disc's??), these wheels do nothing to better that behavoir. Not always fun tbh. Strange, as it's a very stable bike in general.
*I have some very light, occasional, disc brake rub on big efforts out of the saddle I did not have with the DT wheels. Calipers have been re-centered after the wheel swap. Will have a close look at the calipers and give them a good clean. Not a bad idea after 2500 miles of winter use i think

Here some pics taken this weekend. Weight is a little below 6,9kg. I have a scale shot at 6925 before the rimtape swap. Still waiting for the R9170 shifters to become available...Brake hoose shortening has to wait until then. So pardon the little mess in front of the handlerbar

That is a great looking bike
Top

Great looking bike. I was wondering how wide of a tire do you think will fit with that frame. I saw that the bike came with 28 and looked like there was room for a little wider tire. 32mm?
Top

MoPho wrote:This may help with the lever rattle http://www.bikeradar.com/au/road/gear/a ... ere-41888/ Scroll down to the bottom
My levers rattle a little under certain conditions, but haven't been bad enough for me to do something about it yet.
I also painted the covers on the levers black, looks way better

Thx for the link, will have a look at the leaver and do a test. Thing is, most of the rattling comes from the downshift lever I think : at the top, there a small screw and washer to allow the lever to pivot, and there is play on that pivot. I should try to unbolt it, and play with very tiny washers or rubbers to eliminate the rattle, but of course to still alow the lever to move freely.

As I already have a can of plastidip at home, I will give it a try and see it black covers looks good or not.

Re - rattling shift levers.
I had the same problem, cured by threading some PTFE tape behind the pivot point to take up the play. The low friction of the tape allows the lever to move freely so function is not affected.
Top