If you start through this thread in the beginning you'd see that I've had nearly every boutique part on this build at one point. What's on it now is a culmination of 5 years experience with the lightest parts and what works as well as generally accepted heavy parts and what doesn't.

Brakes. I've had THM Fibulas which are the 2nd lightest brakes you can get. They had very good power but the tiniest bit of grit from rain would cause them to seize and not release. I then had eeBrakes on (I actually think I've had 3 pairs on this bike) but this time around I have been yearning for better braking after having been on 9100 brakes and Super Record for awhile. Super Record brakes are 235g all in with the tuned pad holders, only a 65g penalty over ee and they have better power, modulation and feel than ee.

Headset. I've told everyone this whenever I get a chance but do not buy the extralite upper, it will cut your fork over time. It wears a groove into the fork since they use a non clamping type collar that interfaces with the fork steerer. I have a Cane Creek Slamset which saves 22g over the CK upper and is probably only a 10g penalty over the extralite.

For the most part, there isn't a single component that I'd be willing to swap for something lighter on my bike. Maybe Schmolke Evo bars but other than that I'm pretty much maxed out on this bike as far as upgrades go.

Sorry, I read the first couple pages and some 8 last ones.
Have you considered using better brake front, lighter rear? I usually use front most of the time for power, and rear only If I'm in despair mid corner and still have to brake. So power in the rear is not that important to me. Wheel will skid anyway if I brake hard.

Thank's for the tip about Extralite Upper. I was actually considering it over my Columbus Compass. Extralite Lower might not make sense to me since it saves only 9 grams I think. Had you actually used them and lost a fork because of it? But then I got Extralite expander and top cap, that saved me 40g over the Columbus expander and cap.

I haven't had Powercordz (yet), got Alligator I-Link which are steel inners, and the shift set weights the same as Powercordz. I was thinking about possibly changing the brake set for that, but then your comment... What's the deal, besides careful installing?
Top

Since the Boras needed the rear tire replaced, I decided to redo my tire/wheel pairings so that it would be:

I fortunately did not have an issue with the Vlaanderen plumping up so my brake clearance in the rear was still good. I also put the 130mm Pro 7s stem back on, mostly due to the Specialized stem ultimately causing a creak through micromovements. 130mm is a tad long putting my saddle to bar reach around 55cm but I'll see how I get on with it after another week or so.

Here she is on weekday kit: 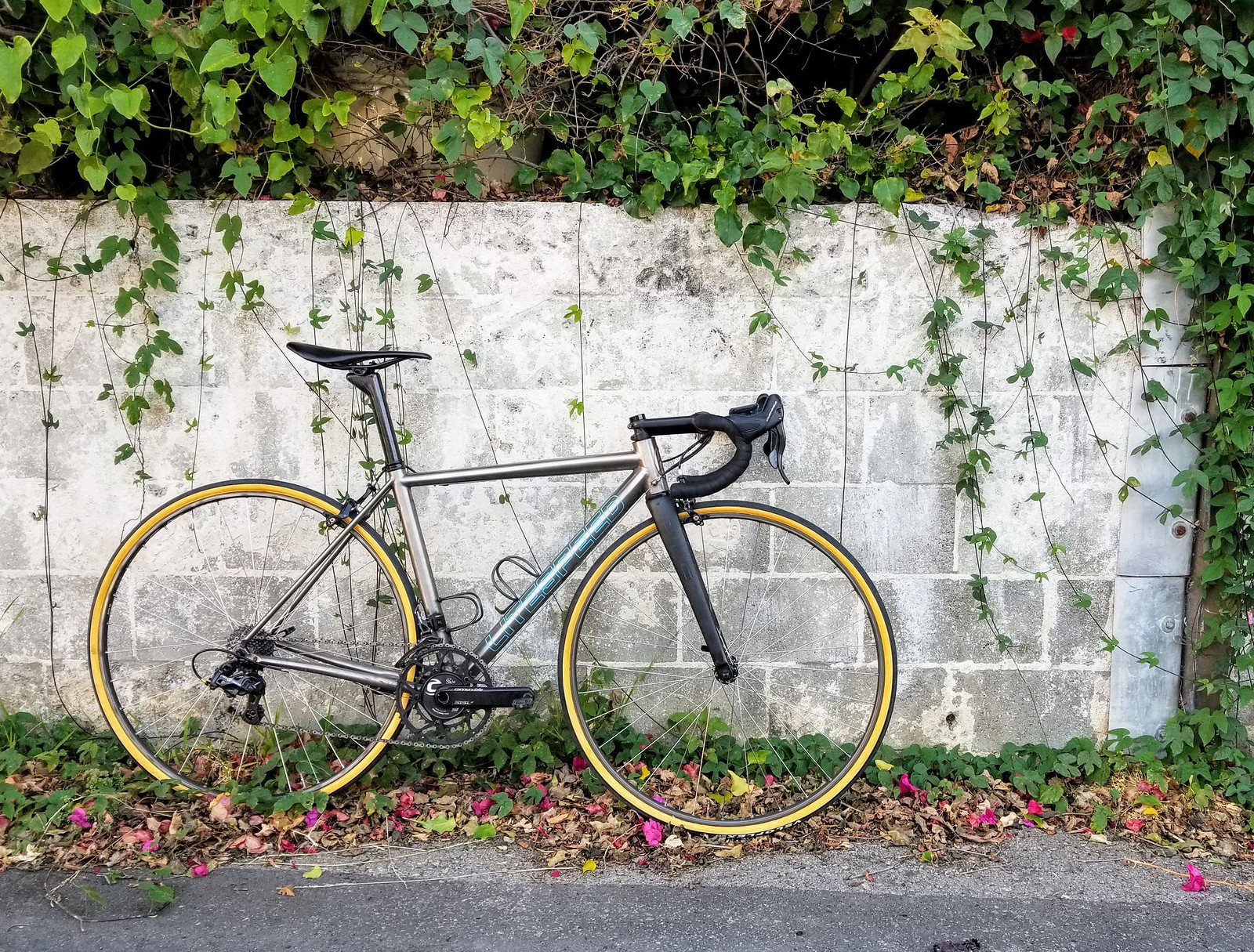 I've been riding the Lightweights for the past two weeks straight and they're a little too much for daily riding. It's like having a track car as your daily driver.
Strava
Not for the sensitive types. My Instagram reviews
The Ex's: I've lost track...
Top

That is a sweet quiver. I missed out on a cheap pair of Vlaanderens on another forum, and I've been wanting to try them, but I'm worried about clearance issues - 25's are tight to get into my rear triangle, due to the bridge location, but fine once on. I feel like I'm missing out on something, as I really like how the Corsa 25 clinchers ( 28mm on A33's) feel, even with the sluggish turn in.

The rig looks really sweet. Interesting that it was the stem itself causing the creak, could you tell where? Are you still running the CK lower with the cane creek upper?
Cysco Ti custom Campy SR mechanical (6.9);Berk custom (5.6); Serotta Ottrott(6.

Ride quality between sizes from clincher to tubular don't translate well. I can get a slightly smoother ride over chipseal with 25mm veloflex than Vlaanderen with less perceived mushiness and better handling. On dirt and most of Hollywood Hills where road imperfections are measured in inches rather than fractions, then Vlaanderen reign supreme. The only application that might be counterintuitive is on flat fast rides, just absolutely adore Vlaanderen pumped up to 80/85 (very high for my weight) as the sensation of speed is unparalleled.

Regarding the creak, it's definitely due to the stem. I loosened my top cap midride and the noise went away. It was happening with the CK upper and then the Cane Creek slamset upper (Extralite lower has been the same since day one). Ultimately, the headset compression will become slightly undone over time, which makes sense, creaking means movement and movement of stem means it's possibly going somewhere and that somewhere is up. Pro 7s is back on and rock solid, creak free.
Strava
Not for the sensitive types. My Instagram reviews
The Ex's: I've lost track...
Top

I have a T5G and have used it both as a daily commuter (50 miles round trip) and on a recent bike packing trip through Vermont, Canada and Upstate New York (use a large Relevate seat pack and frame pack, not panniers). The geometry works quite well for both of those applications. Not sure that I would find it as enjoyable as my go to road bike, but I have been pleasantly surprised by the versatility of the frame.
The Stable (I really need to update this) http://www.flickr.com/photos/121194764@N07/albums

thanks Jrobart, any views on the T6? looks like a sweet deal going on now..

So, the ad surprised me. Is a t5 inbound or do you like the Willier and Crumpton that much?
Cysco Ti custom Campy SR mechanical (6.9);Berk custom (5.6); Serotta Ottrott(6.

in reply, themidge wrote:I hope this doesn't spell the end for the Litespeed

then, ominously, RyanH wrote:@themidge
In its current glory, yes, this is most likely the end. I'm on the fence if I'll keep it as a backup bike or the Classic.

* that's the 3rd of August by the way, for all you silly Americans

in reply, themidge wrote:I hope this doesn't spell the end for the Litespeed

then, ominously, RyanH wrote:@themidge
In its current glory, yes, this is most likely the end. I'm on the fence if I'll keep it as a backup bike or the Classic.

* that's the 3rd of August by the way, for all you silly Americans

Oh yeah, lol I can't even read my own dating system properly

Edit, I went back and checked, the original post was on the 3rd of August, but I wrote it wrong in my OP 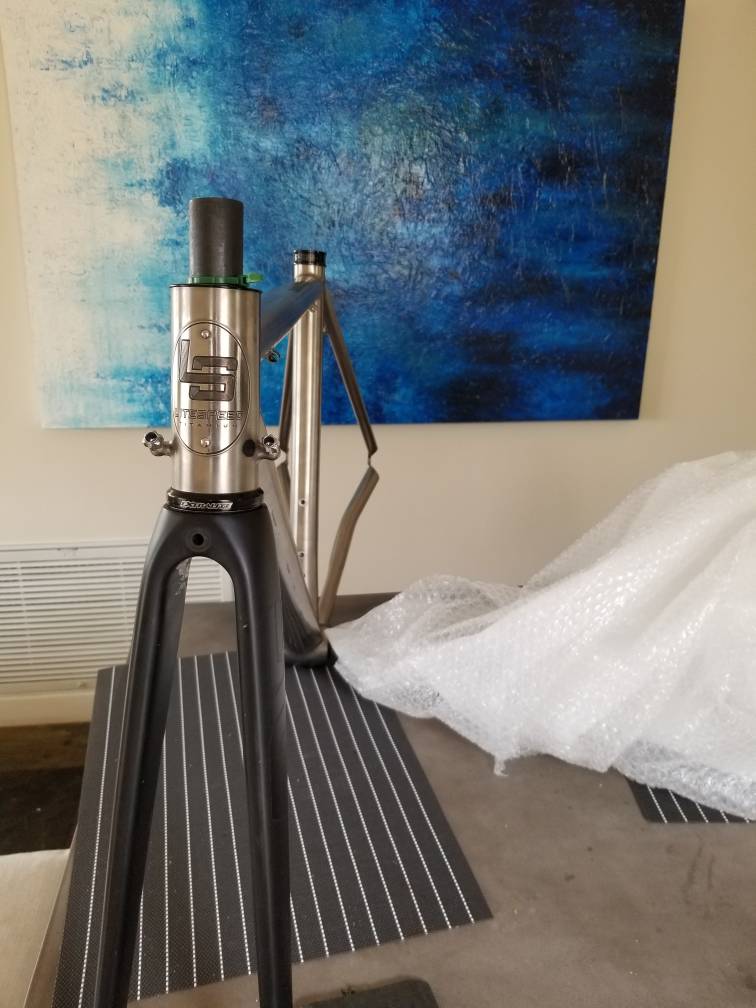