After this year where I flirted with the thought of not being able to ride bikes ever again, I decided to expedite my next build. It's been 4 years since my last new bike, and it's still great. But deep down, I wanted a bike that wasn't made in Asia, just to support... well, the history of our sport and bikes which are dreamed, created, and tested by people who ride, just like us. I'd rather see more cool road gear from Europe (and North America) than less.
So this build will have... more of that. 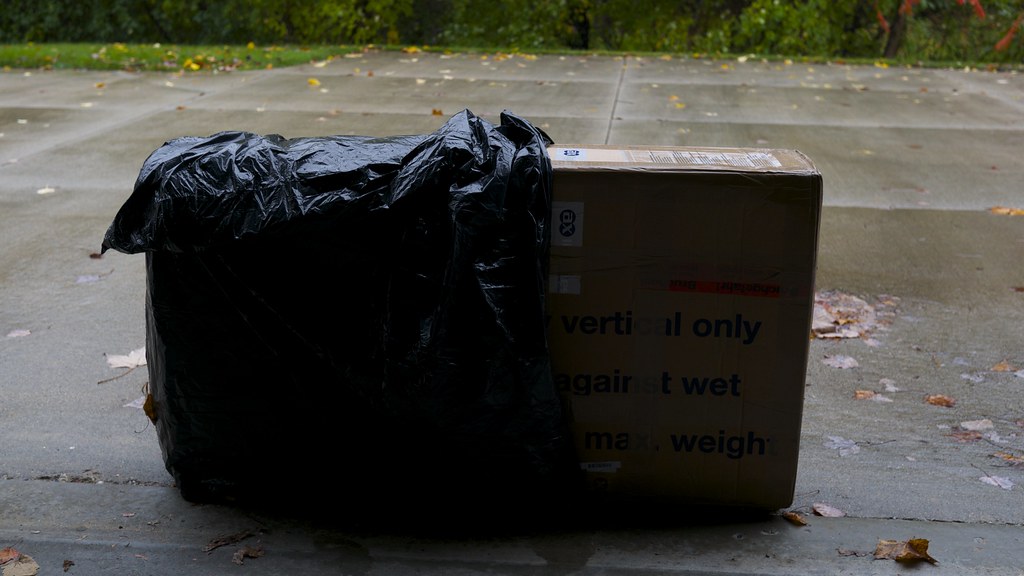 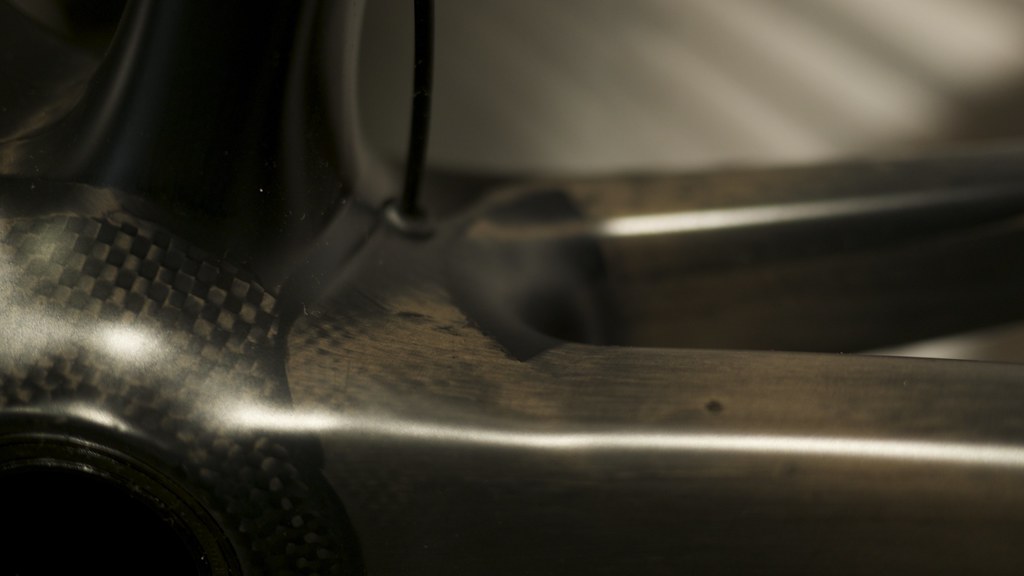 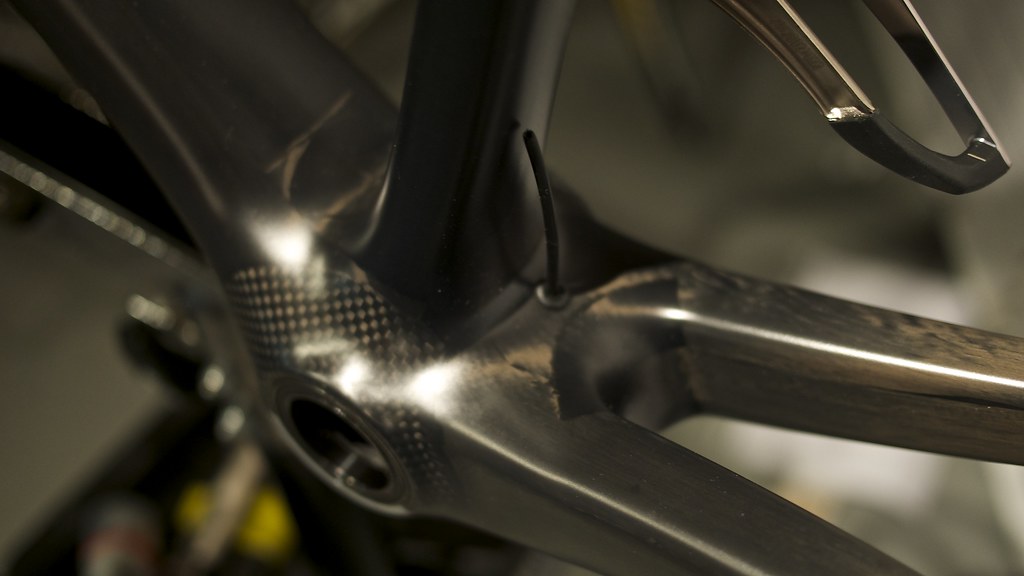 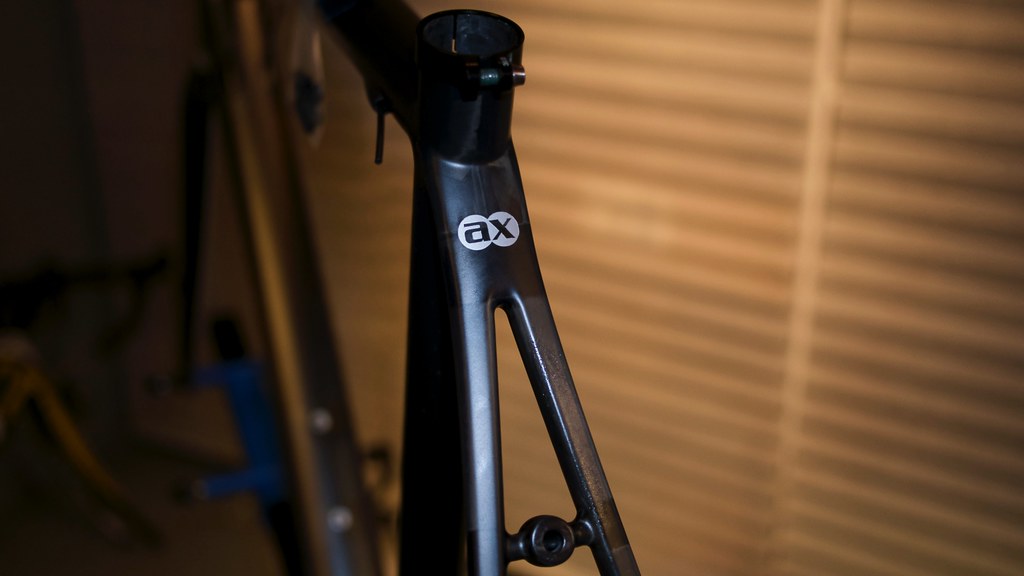 The stock seatpost clamp was a surprise: 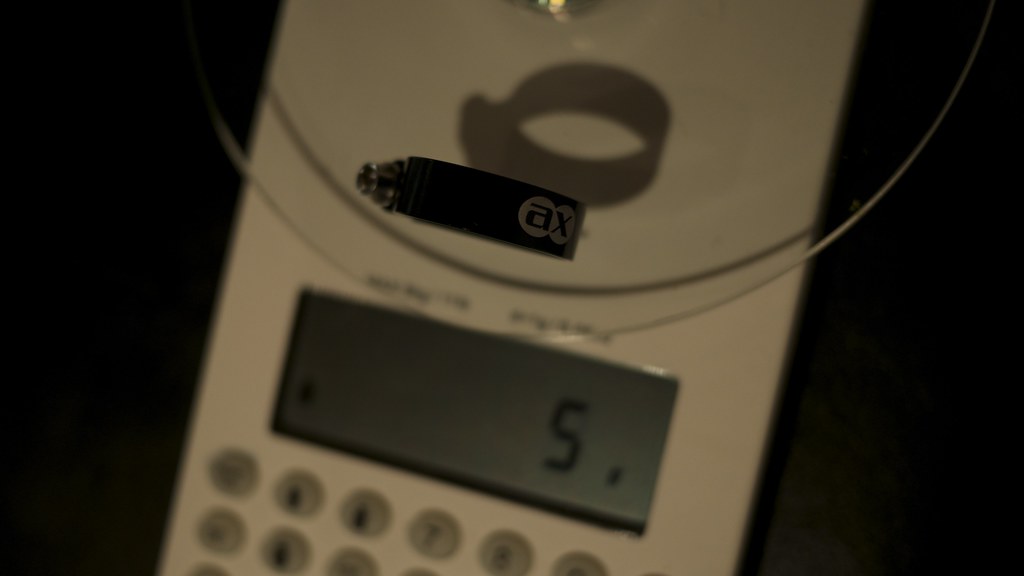 Even lighter than a MCFK Sub5 clamp: 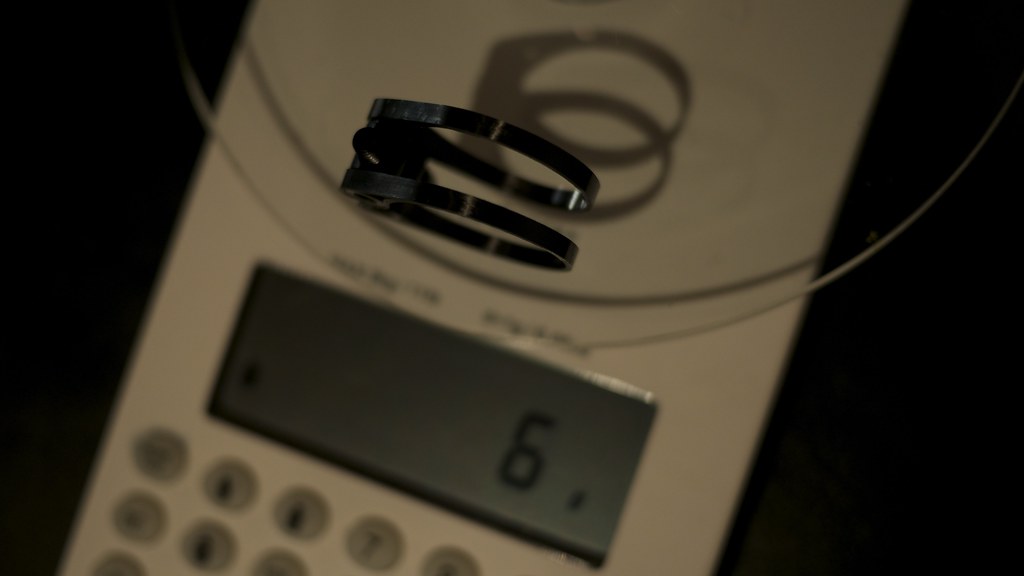 If I had to be critical, here is the seat tube, with what looks like some splatter from the painting process. Might be able to take this out, not sure. 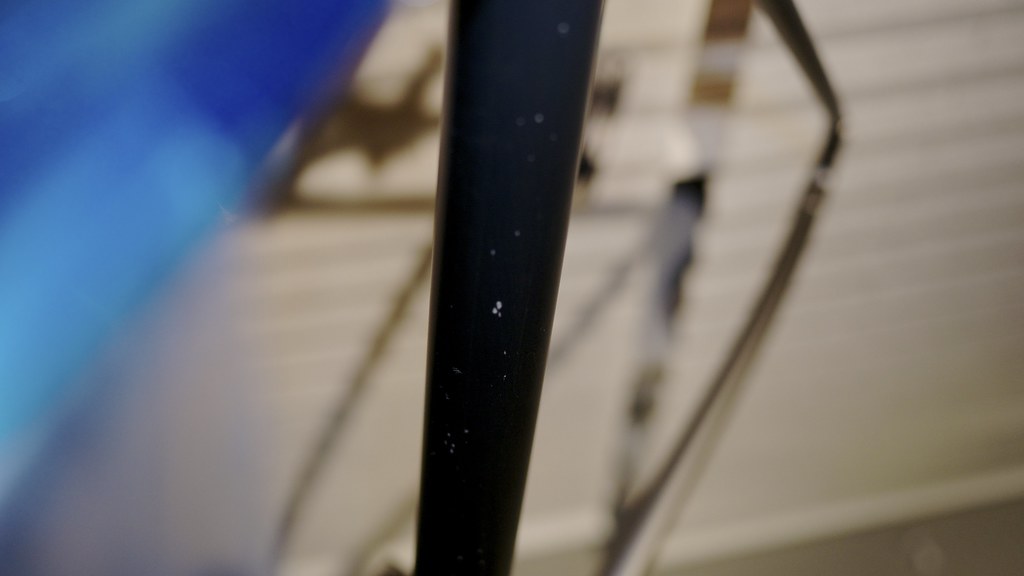 The top part of the downtube (and top tube) has a bit of 'character' which looks like the carbon layup inconsistencies. I'm fine with it if AX is. 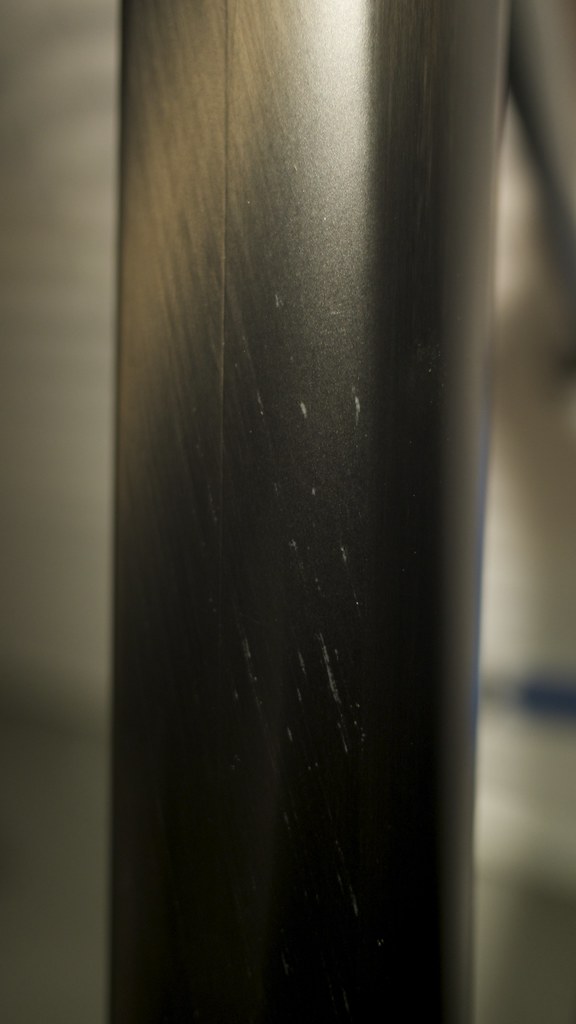 Sadly, the 350mm seatpost I ordered came up 5mm too short so the build will likely drag on for a few weeks.

I thought about going with Record (since it's produced in Italy, still, I think), but for the moment, I have SRAM derailleurs hanging around...

It was a good excuse "destroy" a brand new Red derailleur: 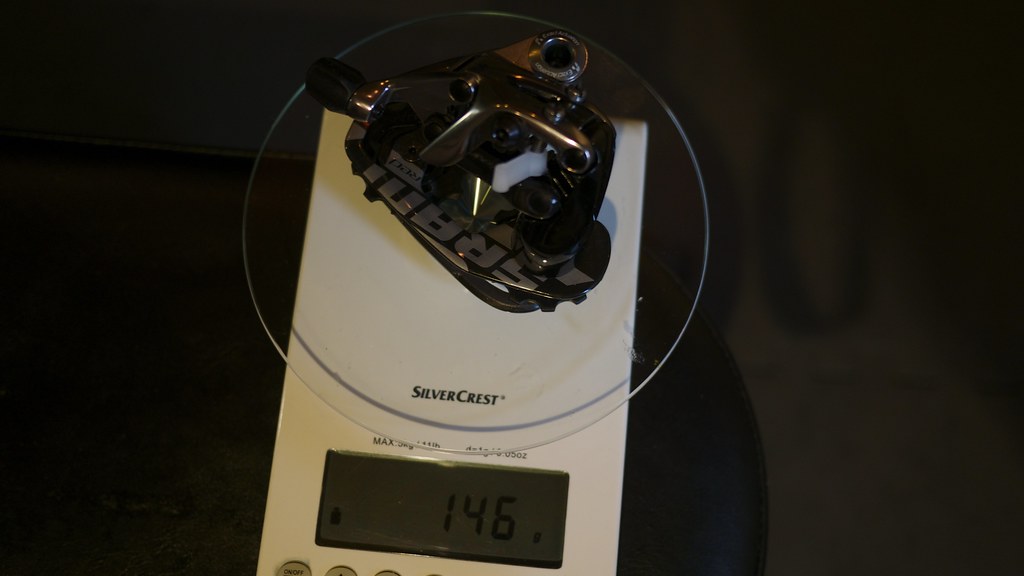 Figured I'd make it waaay lighter with this here Fibre-Lyte rear plate! Well, maybe not, since the stock plate is plenty light, but maybe it'll be fun?: 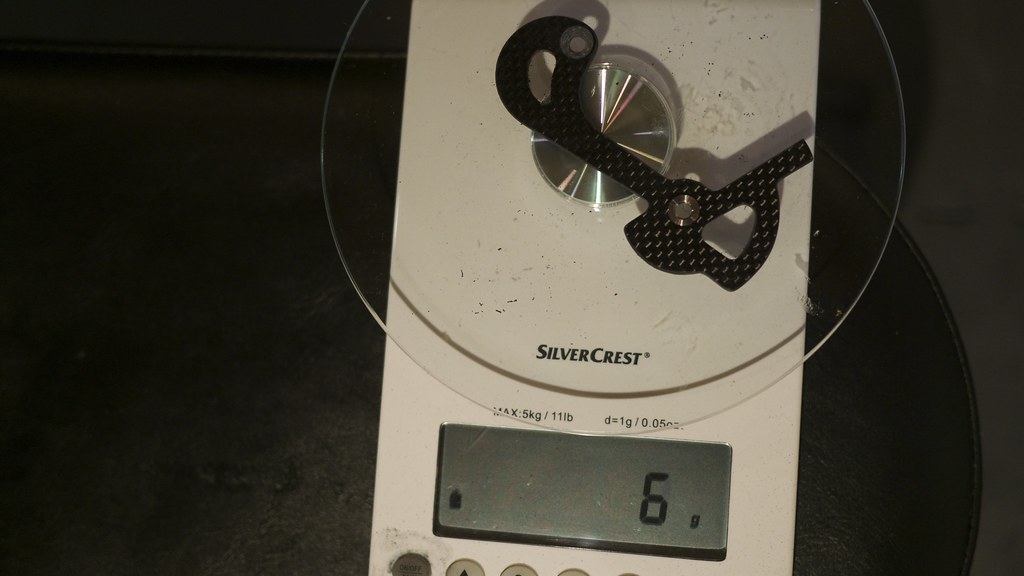 Perhaps I had too much fun with it: 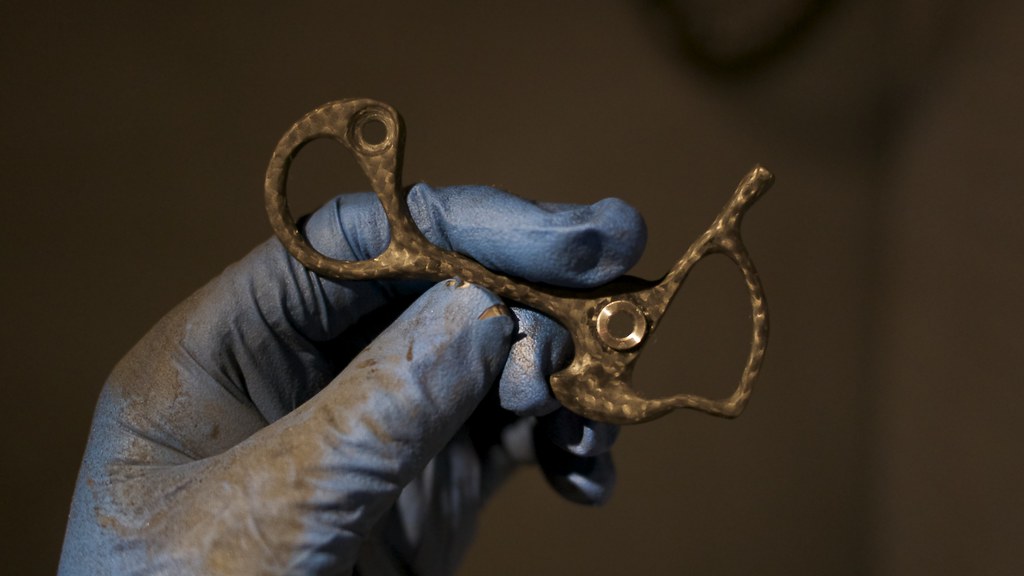 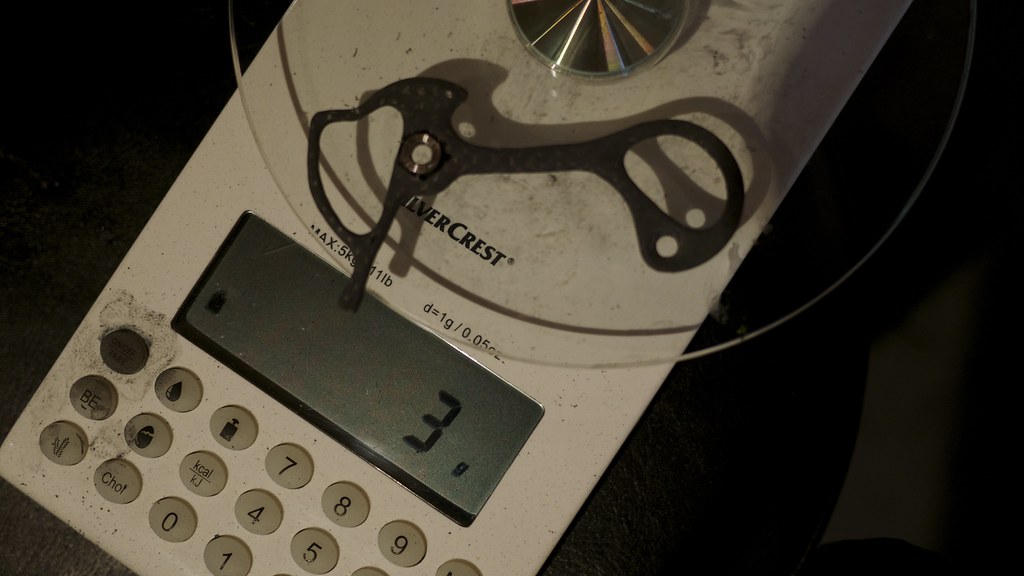 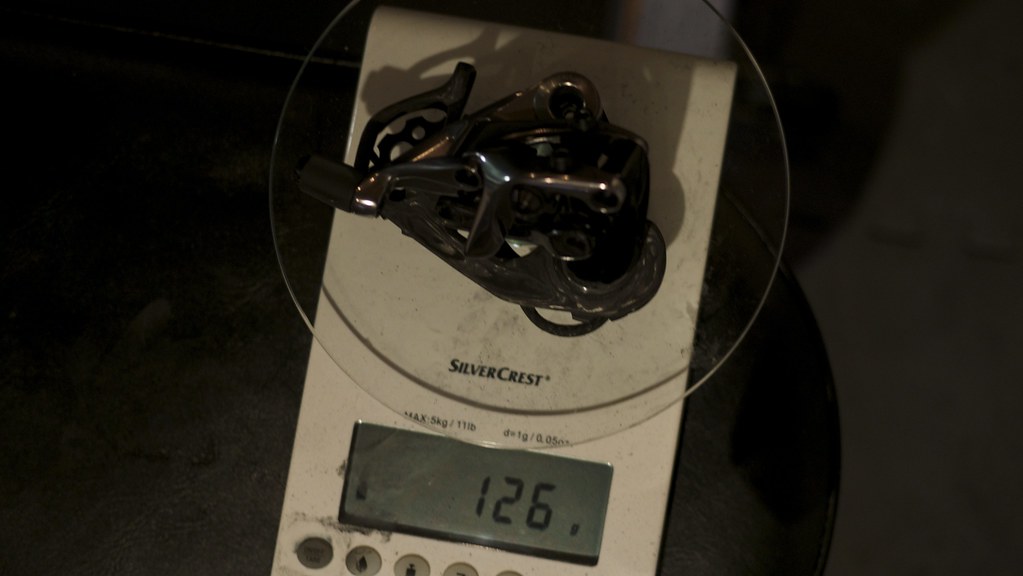 Also picked up a Edge 500 (lighter vs the Edge 1000) but the blue version with white underbelly is the cheapest for some reason. The Red/Black version has a red underbelly. So...
Face swap: 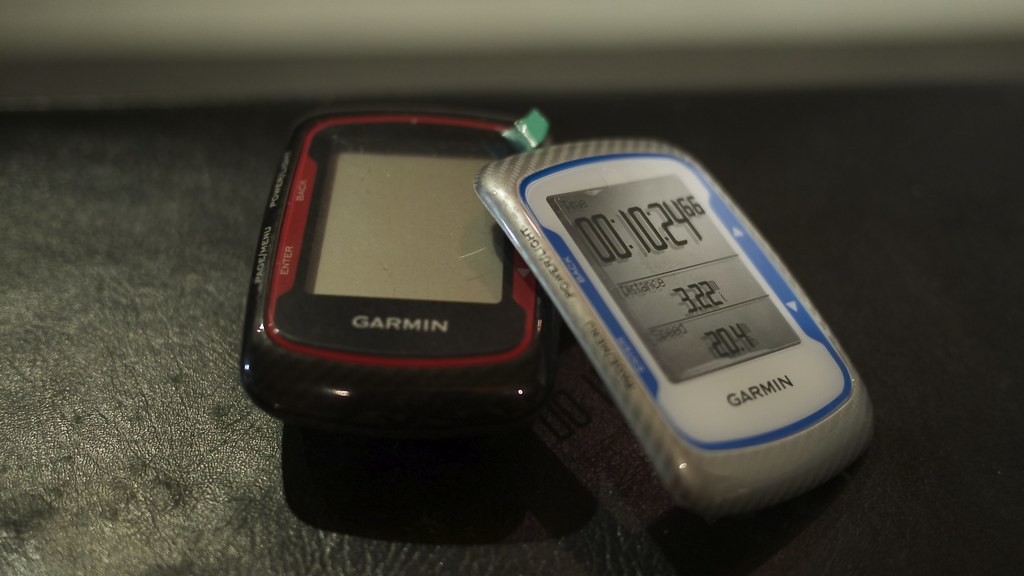 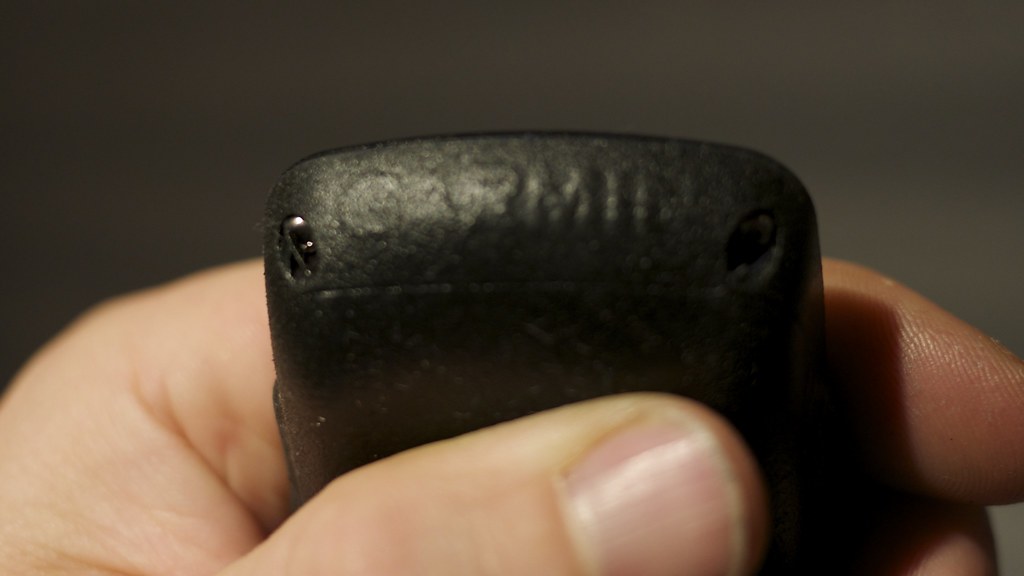 Tested the buttons and the black Plastidip isn't coming off anytime soon: 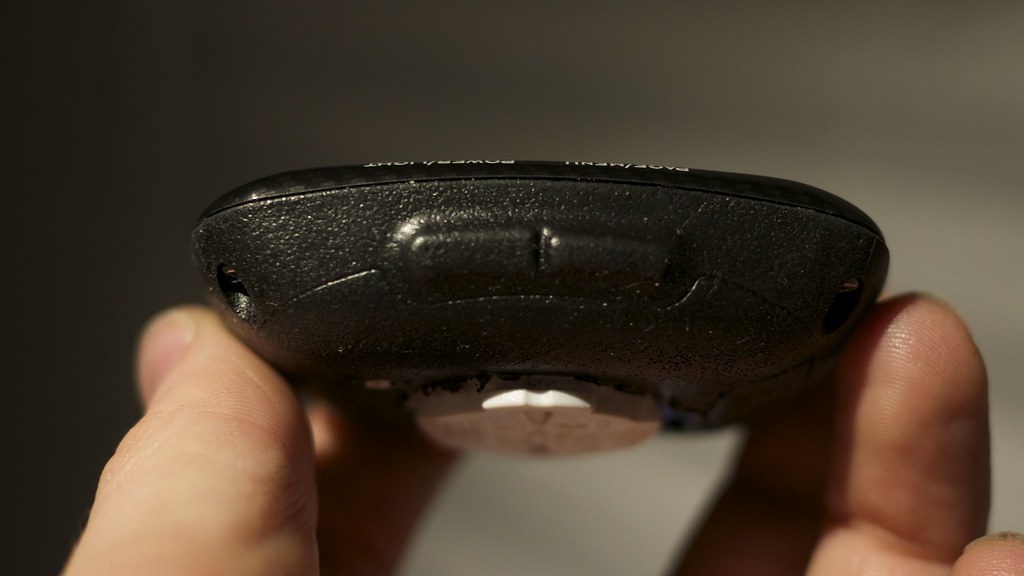 Just remember to plug your barometer holes with tape and/or toothpicks.

About as far as I got today.
To be continued.
AX Vial Evo: 4970g
Addict SL : 5235g
My Cycling Blog
Strava: Wayward Cyclist
Top

Kinda disappointing on the frame finish.

But who cares, after all you've been through to see you back riding is awesome.

I'll be following this thread. Very few things in gear excite me anymore but I love how AX hasnt added any cosmetic shit to cover up what carbon looks like and what it takes to layup a high end bike.
Top

While it definitely doesn't look handmade, it's true that it's not a mainstream bike. Like a singer with a raspy voice I suppose. But after seeing all the online photos over the past 4 months while I waited for delivery, the mixture of carbon weaves never looked that great to me. But in person, it really does look cool.

As for the carbon finish, I'm likely to put more damage to the finish after riding a favorite rock garden (that strangely no one is challenging on Strava). The camera makes out the 'character' marks slightly more than in person. I actually didn't notice it until working with the frame after a few hours. The paint marks (which is what I think they are) are a bit more highlighted in person compared to the photos. I'm checking with AX to see if the downtube marks could be structural, but until then, the build continues.
New (longer) seatpost and handlebar en route.

Threads. I will be following your build.
Top

Ok, now i know who is the real weightweener here!

Loving what you did to the mech plate!
2018 Cannondale Evo Hi Mod 4.7kg
Top

Saddling up!
I'm a big fan of the MCFK saddle so I figured I would stick with that. When I ordered my saddle in 2011, there were no options. Just one saddle, take it or leave it. Over the years, MCFK has offered more options with widths of 125, 130, 135mm, 3K and UD carbon, and now you can even get a leather cover version.

I measured my old saddles and they were both 127.5mm wide. I ordered the 130mm since it seems to be in the middle (average) and the UD weave because I never liked the look of a 3k saddle much and felt it would go with the Vial Evo scheme. 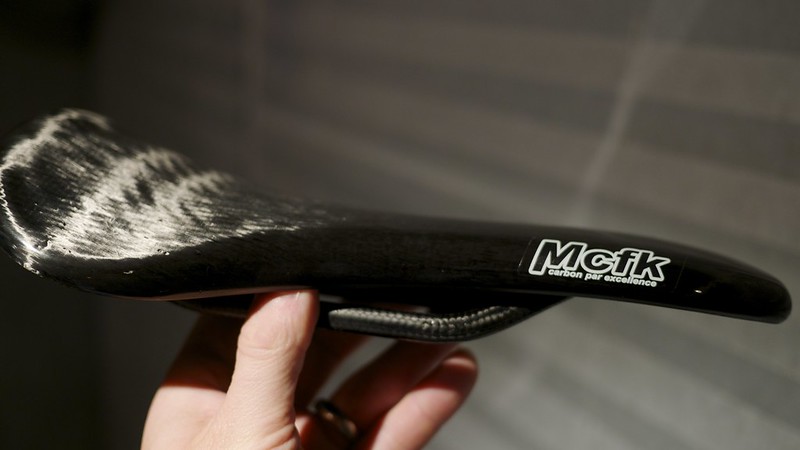 The new saddle arrived and it's gorgeous. I tossed it on the scale and it's not 66 grams, but 81. 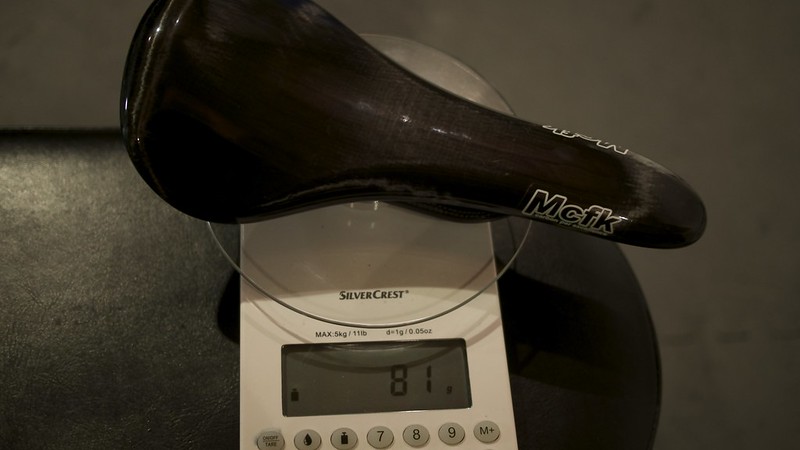 15 grams is not a big deal, and I expected the UD carbon to be heavier, but when I press on the saddle with my thumbs, it's clear that the 66 gram version is much more forgiving, and that's what really makes me wonder. Underneath the saddle you will also notice another small change, the weight limit of older saddles was 90kg, the newer saddles are 100kg.
Old saddle: 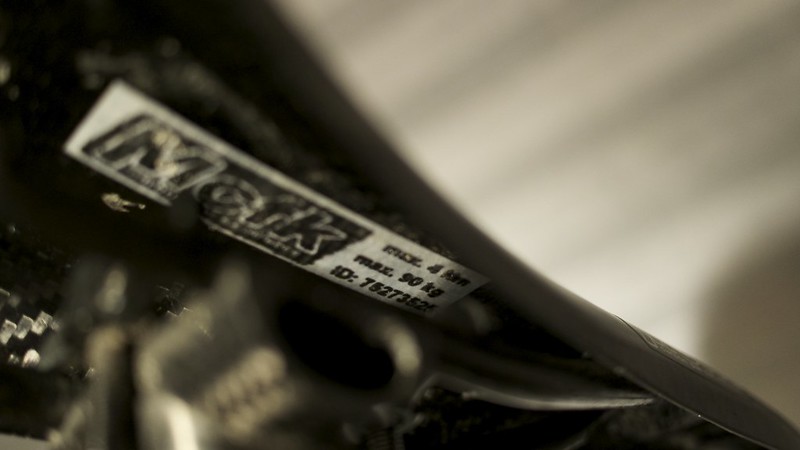 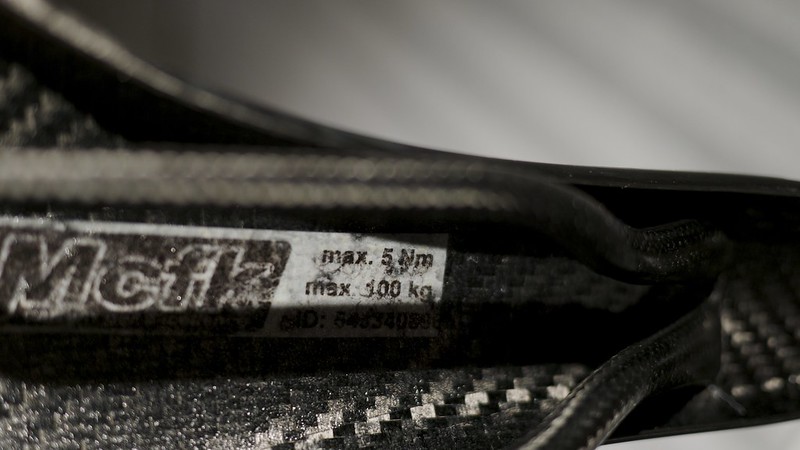 At this point I'm apprehensive. I've loved riding with the MCFK saddle(s) for over 3 years, and I never even notice it, which is why I selected it again. But maybe it's different now, maybe it's fine, or maybe the new (100kg) 3K versions are still as supple as the 90kg versions of old.
You'll also notice a flatter nose on the new saddle, and a more rounded back. The old versions had a bit of a "meeting point" at the back. Not sure if any of this, or the 2.5mm width difference would be noticeable. 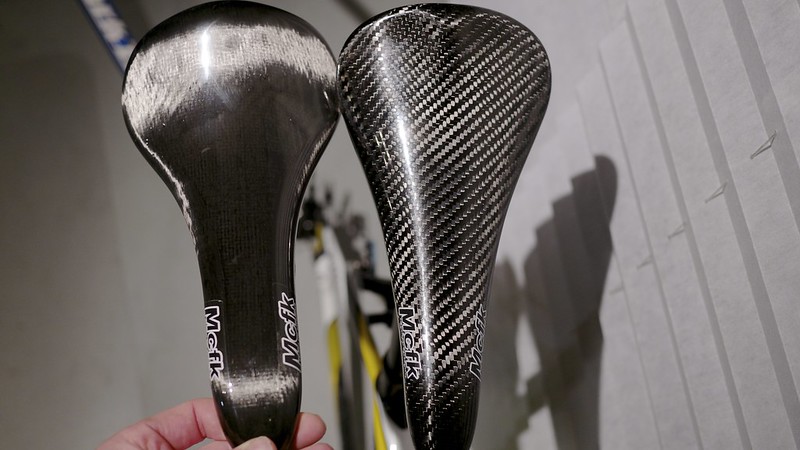 WOW! Look great. I will start on my post soon. I am awaiting a few parts. As far as the finish on your frame. Mine is really good. You have to expect some character traits with hand made WW items. All of my frames have finish issues. Even my newer Colnago C59 has issues with the factory finish. I consider my New Ax-Lightness Evo Vial to be equal or better!!!!
Top

I have both the 130 and old Mcfk saddles, just like you. I slightly prefer the old version but I cracked mine in a crash so that's not an option.

For the most part, the saddle is close in comfort to the previous one. My only complaint has to do with the size, the narrower width fit me better whereas part of my leg will hit the wider part of the saddle now. I had to fine tune my position as that was causing a bump.

Long story short, if I replace my saddle, it will be with the 125mm version.
Strava
Not for the sensitive types. My Instagram reviews
The Ex's: I've lost track...
Top

Thats great info Ryan! I was afraid of the harsher ride. Do you have the UD or 3k? It really baffled me when the old ones came up at 127.5mm which isn't an option currently (I didn't know at the time of the silent update to the design). The 130mm has a much flatter profile so a 125mm might be the way to go. Still might not be as comfy though.
I still have 2 of the original versions. One with perhaps 20,000km, the other which looks near new (based on the stickers). 3k is a fine choice I suppose. That UD is an attractive temptress.
AX Vial Evo: 4970g
Addict SL : 5235g
My Cycling Blog
Strava: Wayward Cyclist
Top

I would just stick with what you know works. I can't wait to see this built up!
Top

I have the UD, too. The 130 seems to be equal to a Specialized Toupe 143,which will also cause lumps for me. The problem was exacerbated for me on the new saddle since I rode pretty far forward on the old saddle and that caused problems on the new one. Moving the saddle forward by a cm pretty much eliminated the issue, at least as of the last 2k miles. My mileage has been lower too though so we'll see if it becomes an issue again during the season.
Strava
Not for the sensitive types. My Instagram reviews
The Ex's: I've lost track...
Top