Thanks very much. This is very helpful.

I need proper rack and guard mounts but I cannot see anything other than expensive Ti frames for Di2.

Your Ribble comments made me laugh, my ten year old Ribble frame has cracked and I have just bought a replacement Ribble frame but rather than swapping the old mechanical componentry I would rather fit new Di2 on a nice frame, but cannot find a frame.

I will keep looking.

Is there a specific reason why you need to run Di2 internally? If it's aesthetics / personal craving then of course, I get it, but there is no technical reason why you can't run the Di2 on the outside using aluminium tape or helicopter tape and some creative routing.

I converted my mechanical Van Nicholas to Di2 in this way and it's hard to tell that it's a Di2 bike. 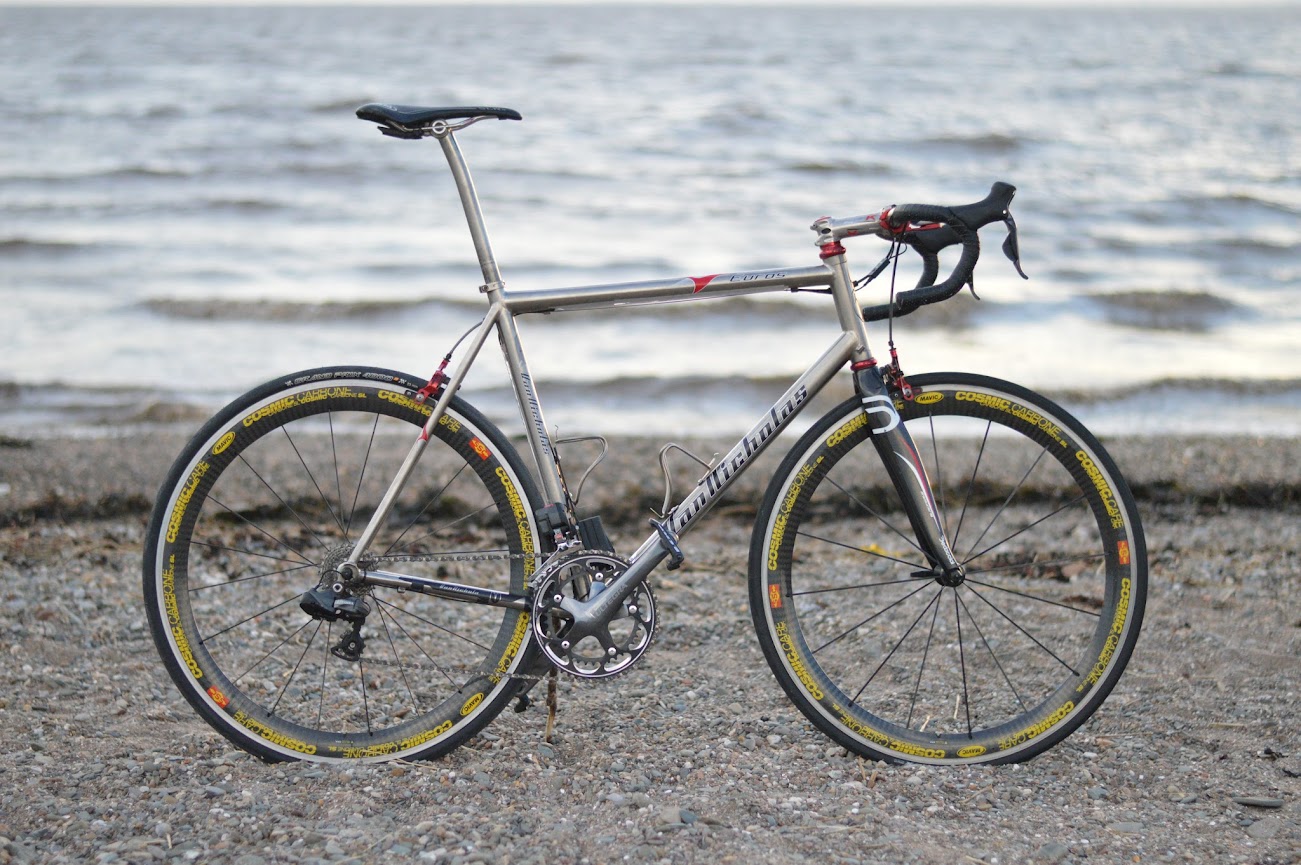 Doing it this way opens up a world of disc-ready commuter options. The Planet X London Road being a good example to start with.

Or perhaps the Cotic Road Rat?:

I prefer the hidden look and the feeling that if I am paying for hideable wires then I might as well try to hide them! Also from a practical POV my winter bike is heavily used and any vulnerable wires will eventually snag on something.
Top

Following my house move, I've made a couple of alterations to my Sportive. First I added a pannier rack and after a bit of research I opted for a Topeak in silver hoping that it would set off the bare titanium. It's not a brilliant match and in hindsight, a black one would look better. Can't fault how well it's made though, and I can't believe that my pannier bag has stayed on after some of the potholes I've hit! 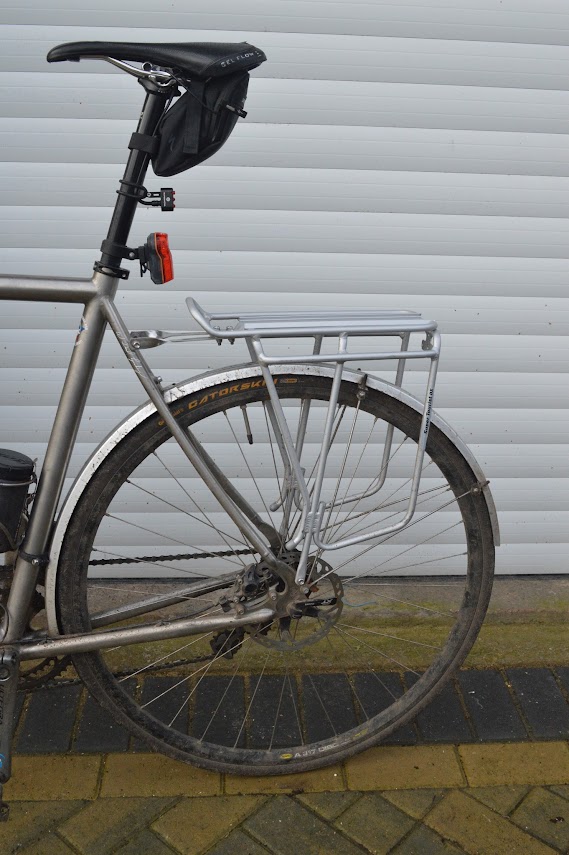 A more interesting change is the addition of a Stages powermeter. I wanted this as I'd got used to having one whilst on my summer bike and when I saw an Ultegra 6700 one in the sale in Evans I went for it. I chose a 172.5 silver one, thinking it would match the colour of my 6600 crankset, but Shimano's definition of silver seems to have become more grey and it doesn't match at all. I've got a 5-arm 6700 crankset now as well, but am waiting until the rings wear out on the 6600 before I swap it out. 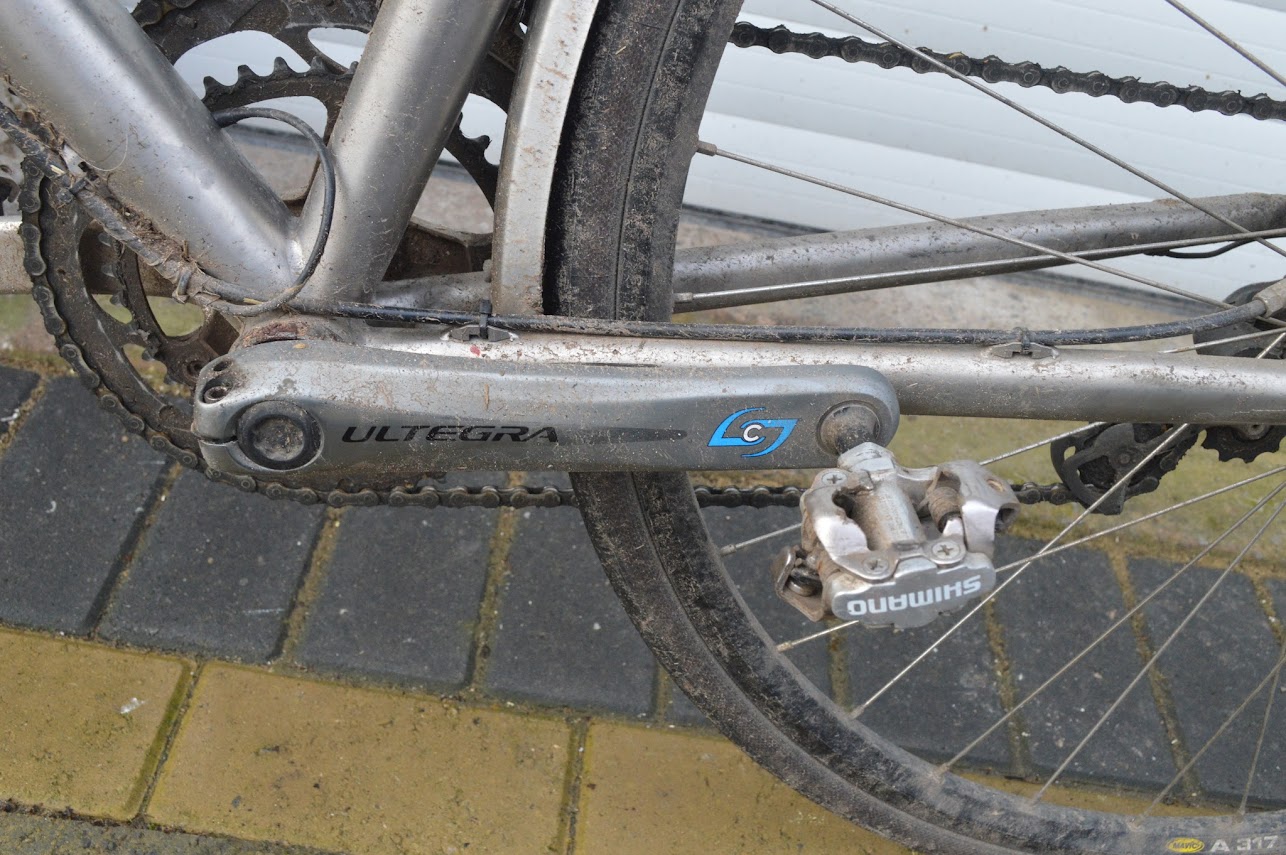 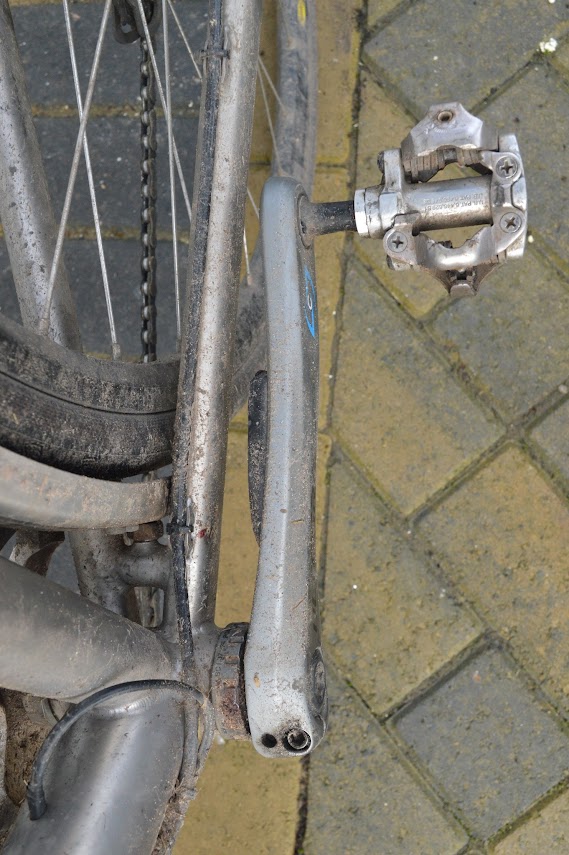 Unlike my P2M and Powertap, the Stages has ANT+ and Bluetooth comms so it can be updated and tweaked using an app. This feature, along with the fact that all you need to do is swap the crank to fit it, its low weight, comparatively low cost and (so far) reliability make it a really good powermeter compared to the others that I have. Power measurement seems to be in line with my Powertap, but at the moment I've only got one Garmin so can't verify one against the other. It'd be interesting to get one of these fitted to my MTB though, hmmmm.

During a cold commute last week, I lost the front wheel on ice and managed to have a crash. No damage to me, but the Lynskey slid a long way and lots of bits got damaged.

The brake levers got a bit scratched and I was quite glad that I have the V-twin as the reservoir is well out of the way. I suspect that the integrated levers with the reservoir on top wouldn't have fared so well. 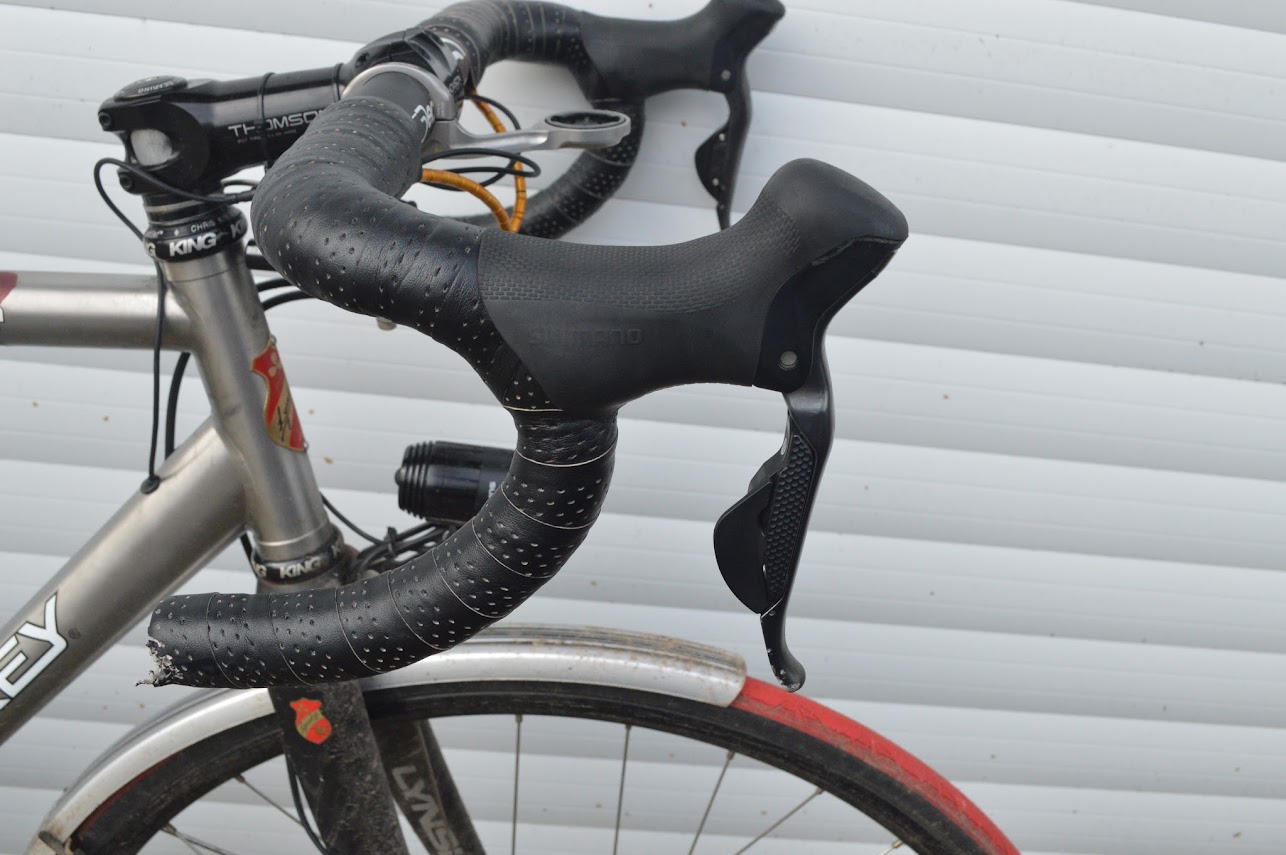 The rear mech and pedal took a bit of beating too. Amazingly, after I'd bent the cage back, the mech works just as well as it did when it was new. Being as 10s Di2 rear mechs are no longer sold and getting rare, I'm glad that I didn't break this. 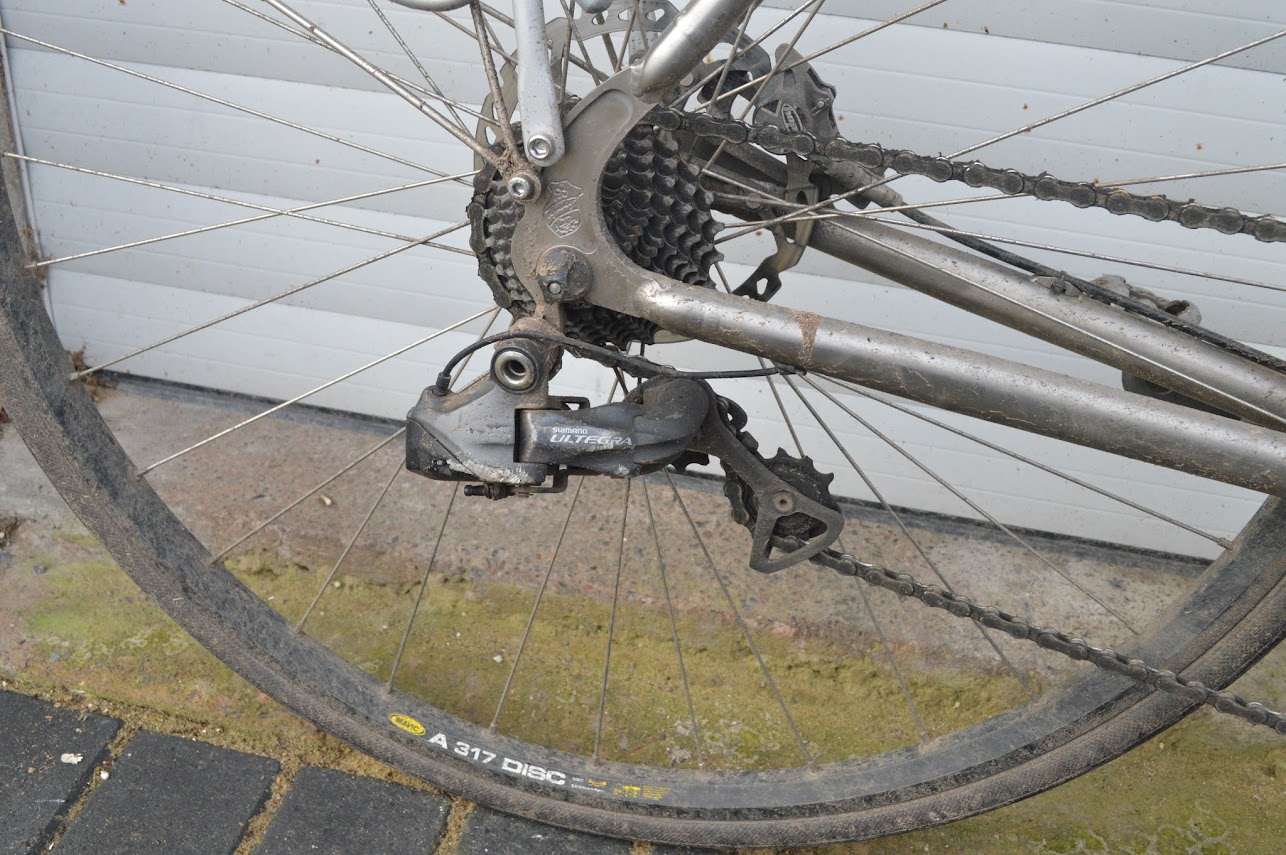 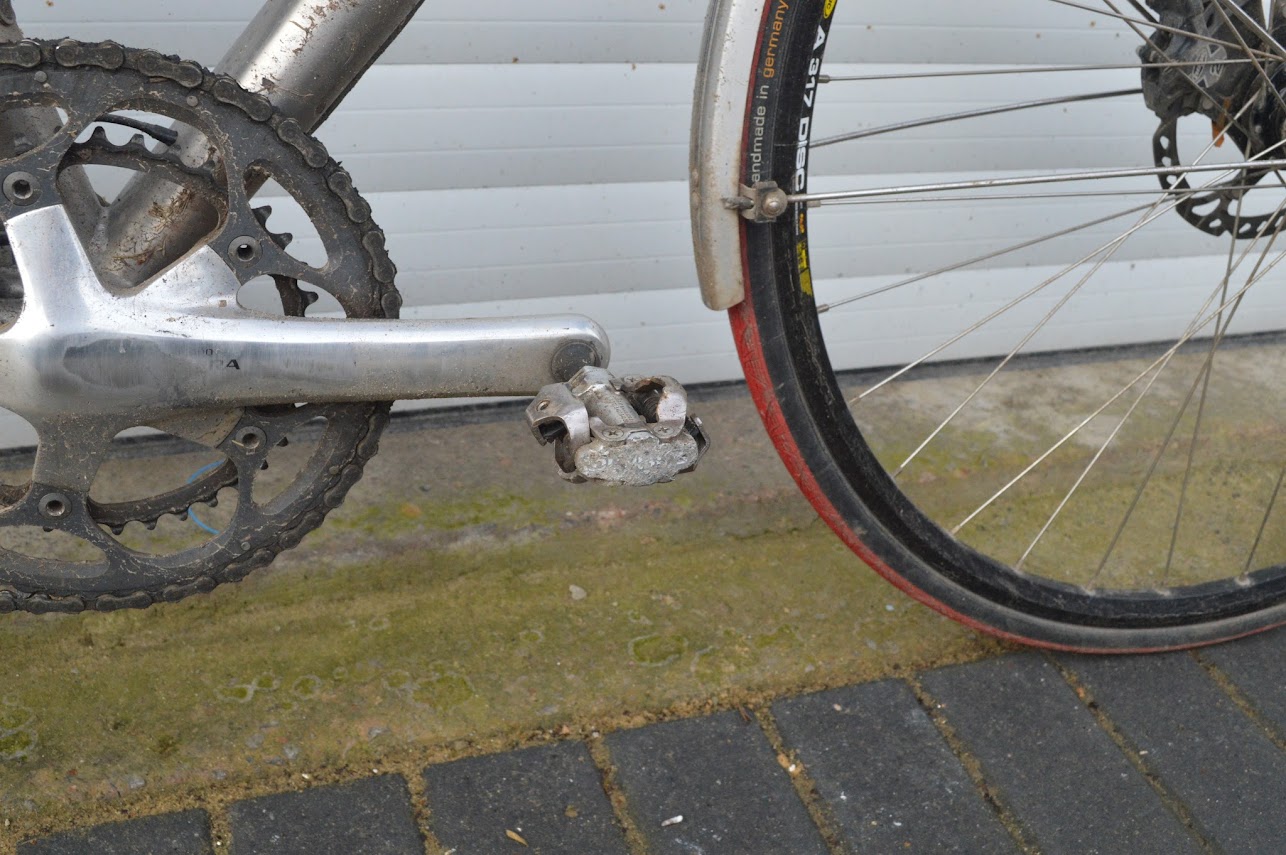 Worst affected was the SLR saddle, the shell snapped during the impact and it's finished.

I can't even get rid of this on eBay, it's just scrap. Can't say I'm that fussed, I never really liked this saddle anyway and I've had it for 9 years already. It's going to be replaced with a Fizik Arione, as I wanted to try something other than an SLR for a change.

I swapped the broken SLR about a week ago and have done about 150 miles on the Arione.

Can't say that I find it overly comfortable but suspect that it may be too far forward at the moment.

As expected the shell on the SLR had split, in two places.

Annoyingly, the little clip that holds my front mudguard in place at the top succumbed to fatigue and failed yesterday. I now have an irritating rattly mudguard that is top of the list to be fixed. Didn't stop me achieving a KOM on a local climb that I've been after for a few weeks. With a pannier. In the dark. Gale force tailwind did help though.
Top

In late March, after 3 years of trouble-free commuting with minimal maintenance, both brakes and the rear hub on my Lynskey cried enough and seized up. In spite of having the whole summer to mend it, I waited until the week before the clocks changed to actually do something about it.

I had a new SP8 hub and a Hope XC rear hub ready to go, as well as a pair of hard-anodised H Plus Son Archetypes in grey. I had hoped to recreate the look of the 2005 Mavic Crosscity wheels as I'd always liked them. To do this, I elected to go for black spokes and black nipples. Whilst I would have liked to tackle this myself, I didn't have any black spokes in my parts bin so decided to get Ryan the wheel-builder (http://www.ryanbuildswheels.co.uk) to do it for me. A couple of days later they were ready. They look fantastic and are superbly laced. Thanks Ryan! 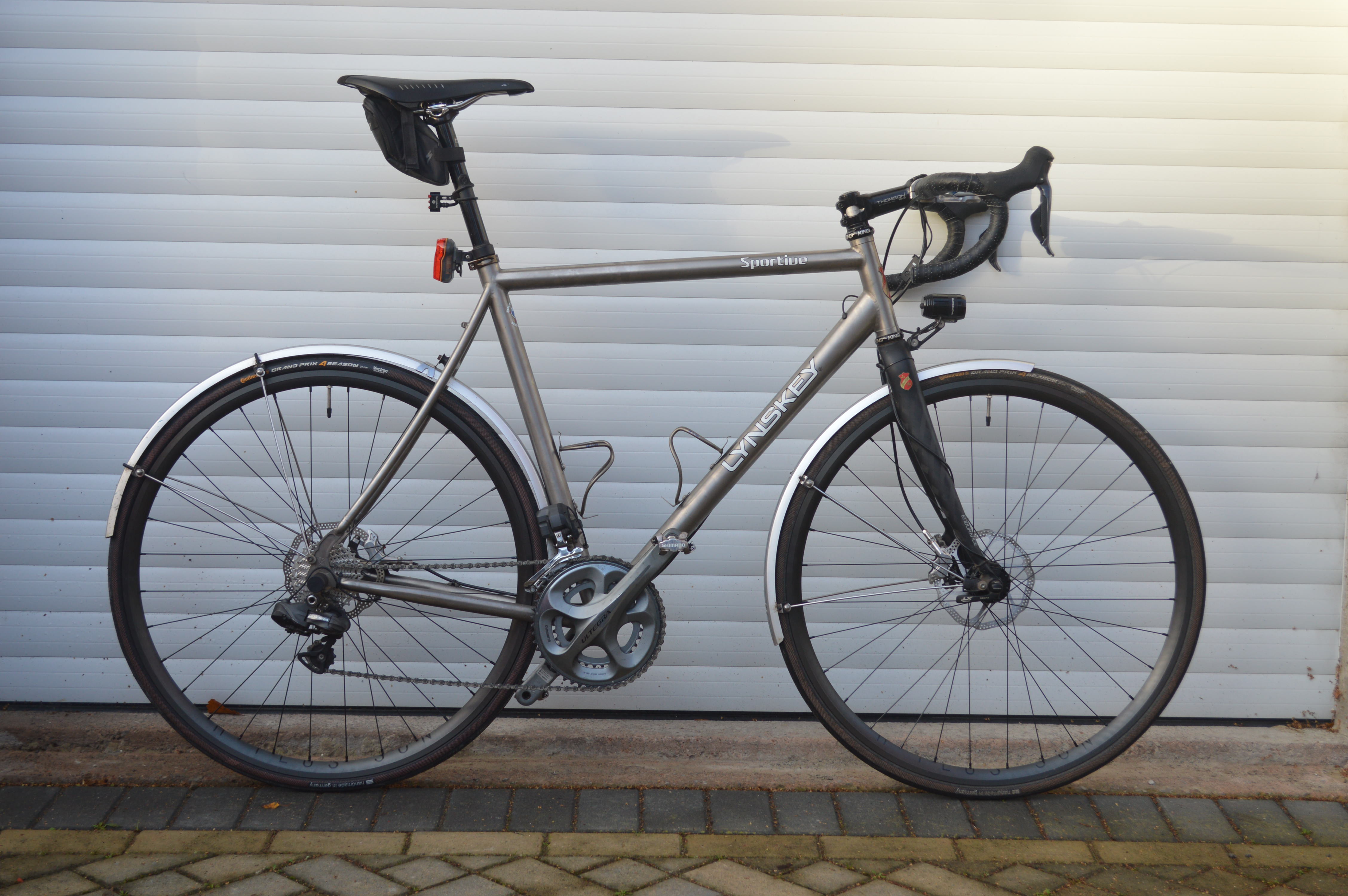 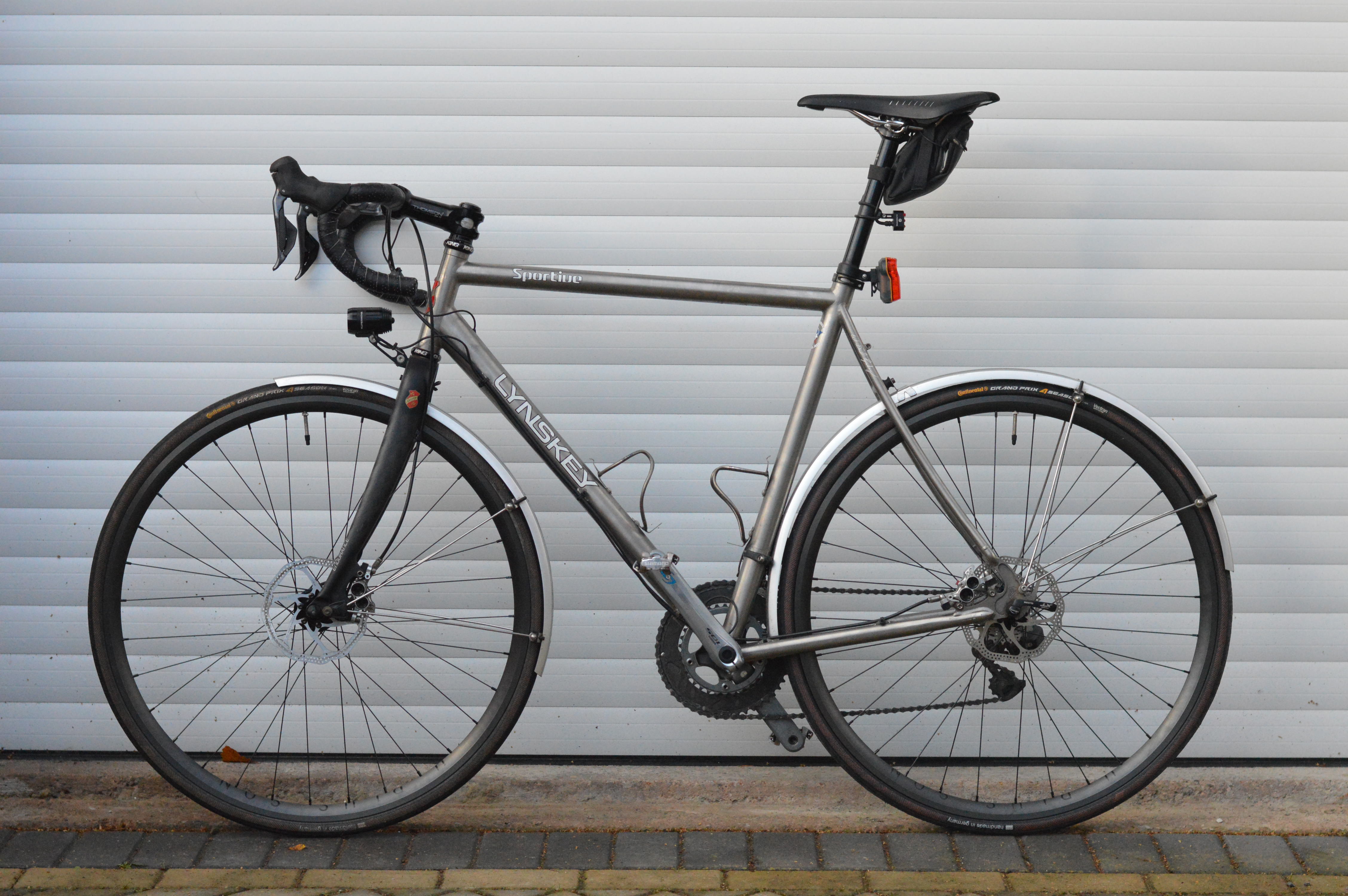 From the outset I'd planned to update the Hope V-Twin and 6770 levers with the new Shimano Ultegra R8070 STI levers and, following the lengthy release period of the Hope RX4 brake calipers, a set of those. I'm sure that the R785 levers and Shimano calipers work just fine, but I really liked the aesthetics of the new R8070s and the Hope 4-pots. Probably the wrong reason I know, but Shimano rarely come up with a bad product and I used to run the Hopes on my DH bike so am happy with the modulation and power. The operation of the full hydraulics is a revelation compared to the old cable / hydraulic hybrid system. 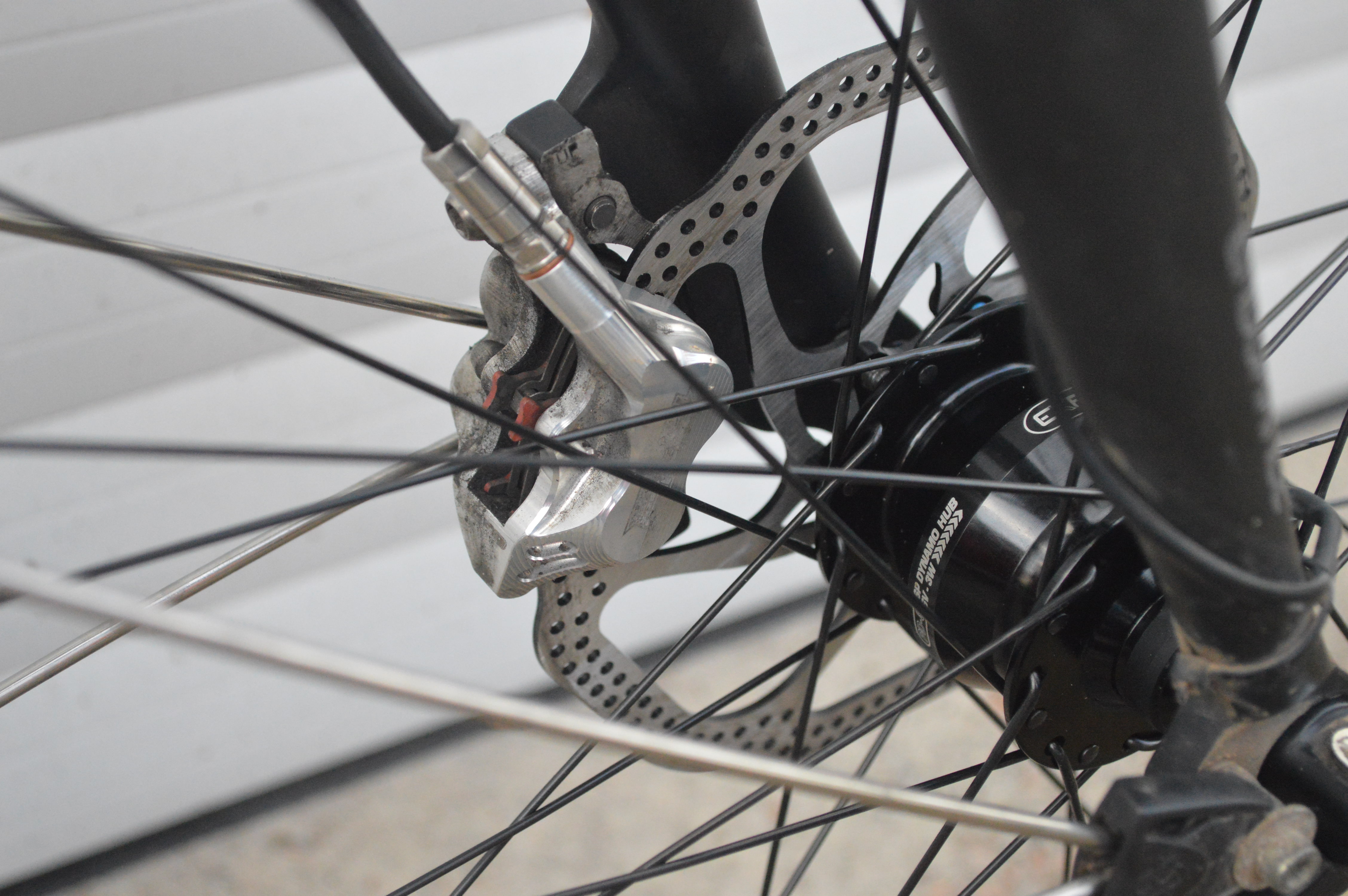 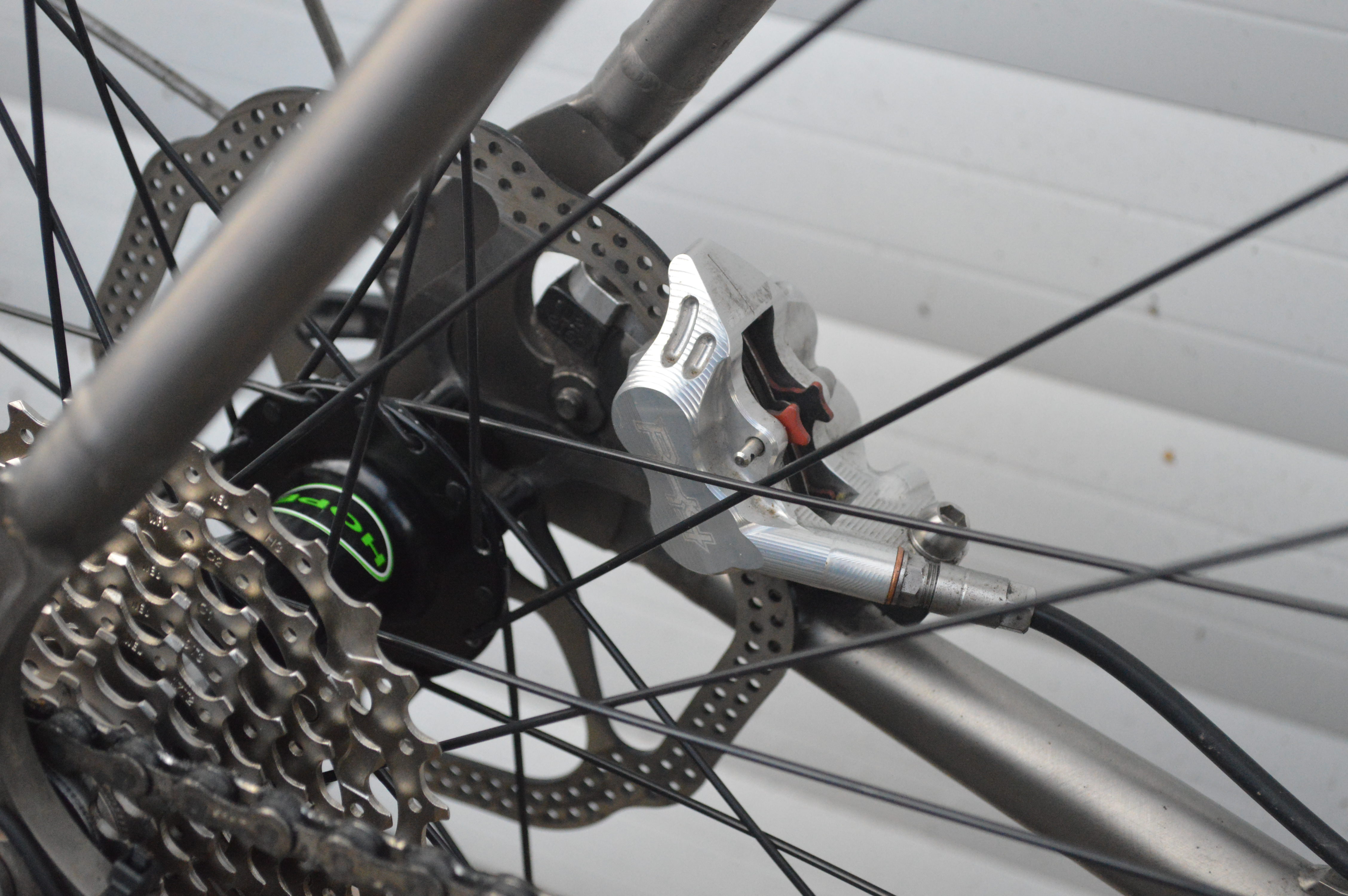 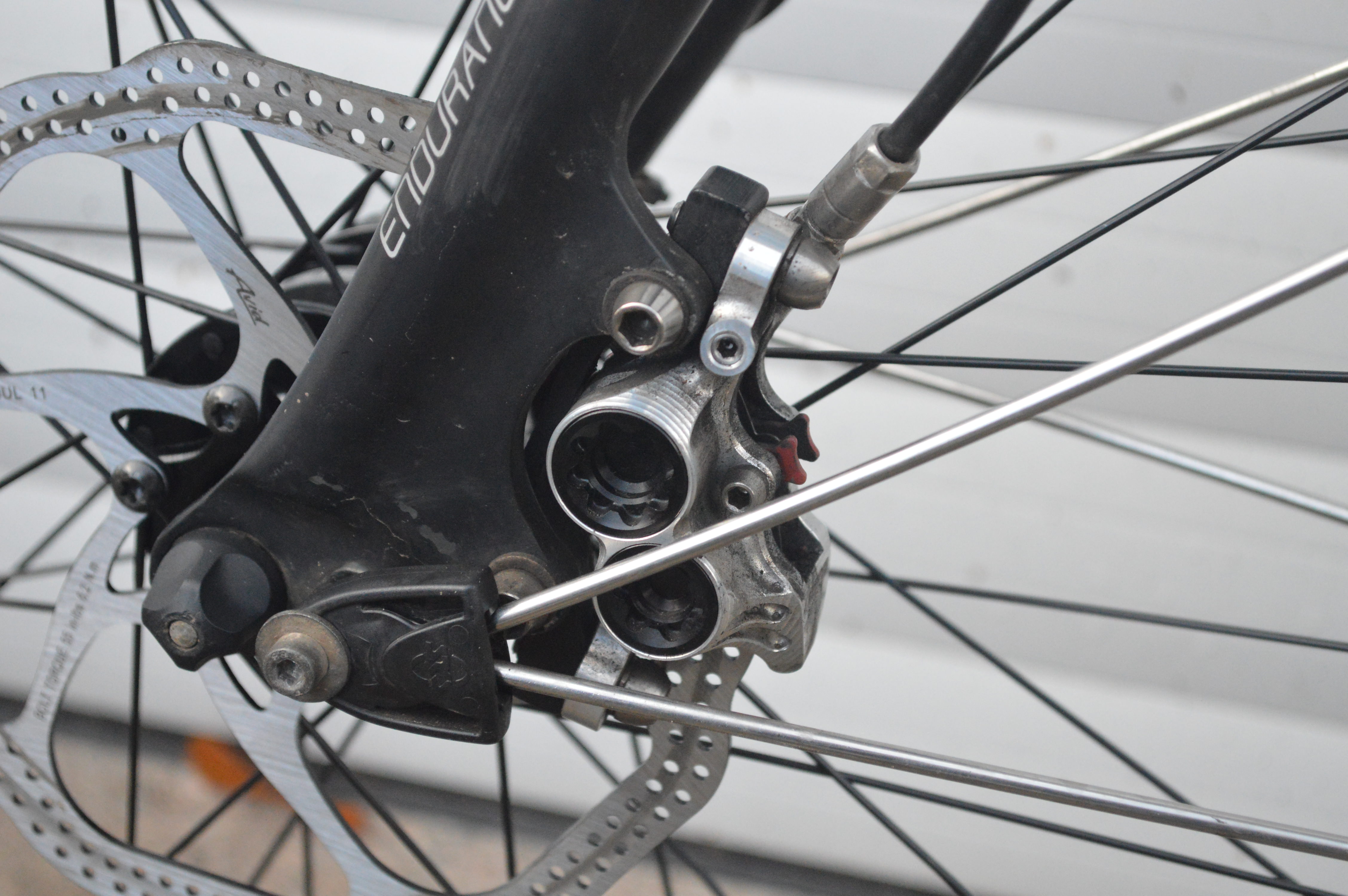 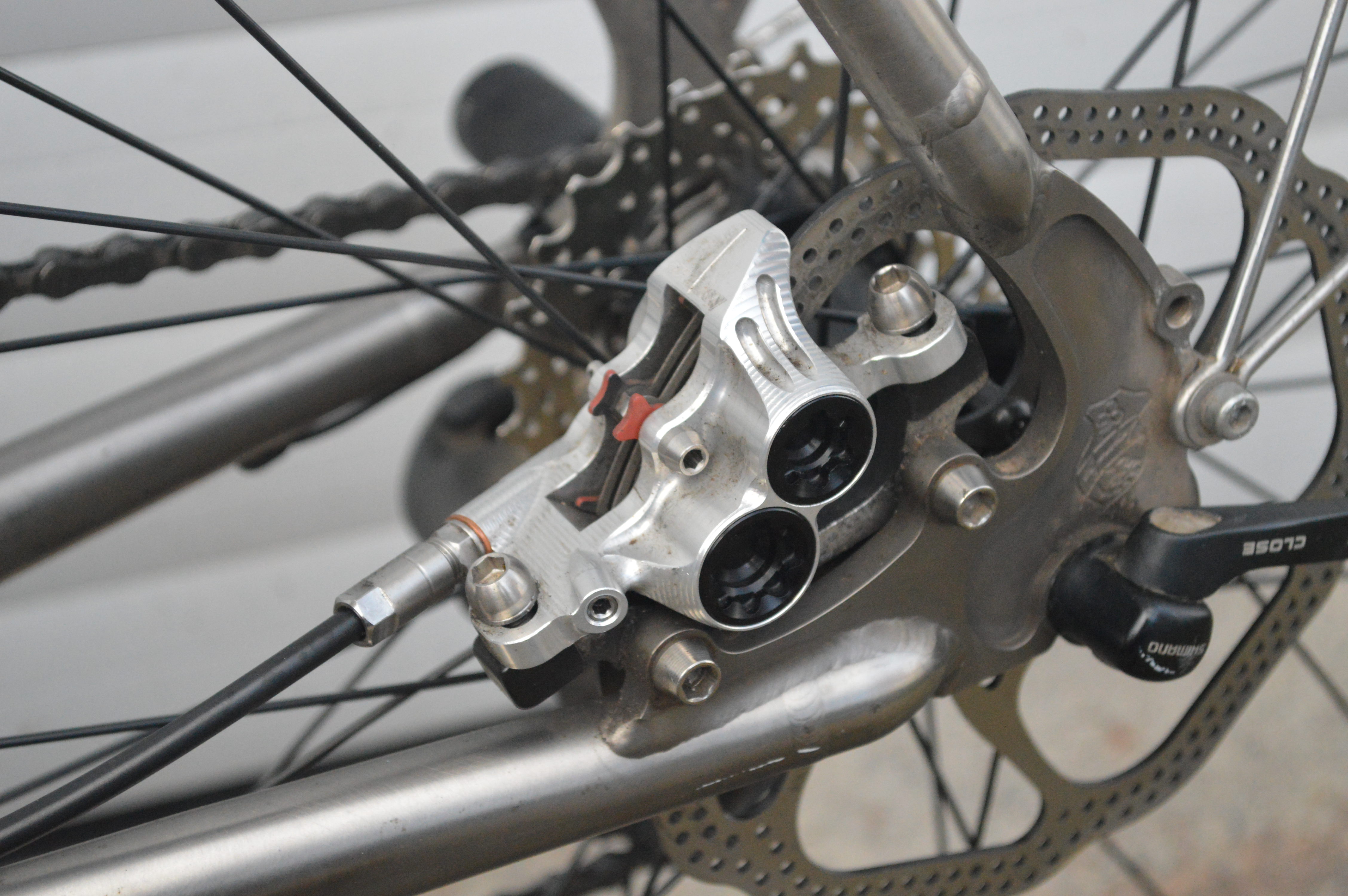 There were two challenges with fitting the new levers and calipers:

1) The Shimano hydraulic levers are impossible to bleed without a bleed kit and the Shimano brake bleed cup. Just impossible. The fact that the RX4 caliper doesn't have a bleed nipple that you can fit a hose to compounds the issue. You just have to buy a bleed kit. Simple as that. It's easy then.

2) When I first plugged in the levers, the system didn't work. This wasn't a surprise so I updated the software on the deraileurs and shifters. It still didn't operate. With no way of doing a further software update I was forced to buy a PCE1 diagnostic device. Sure enough, the Junction A and the battery needed a software update too. After that, the system worked fine. 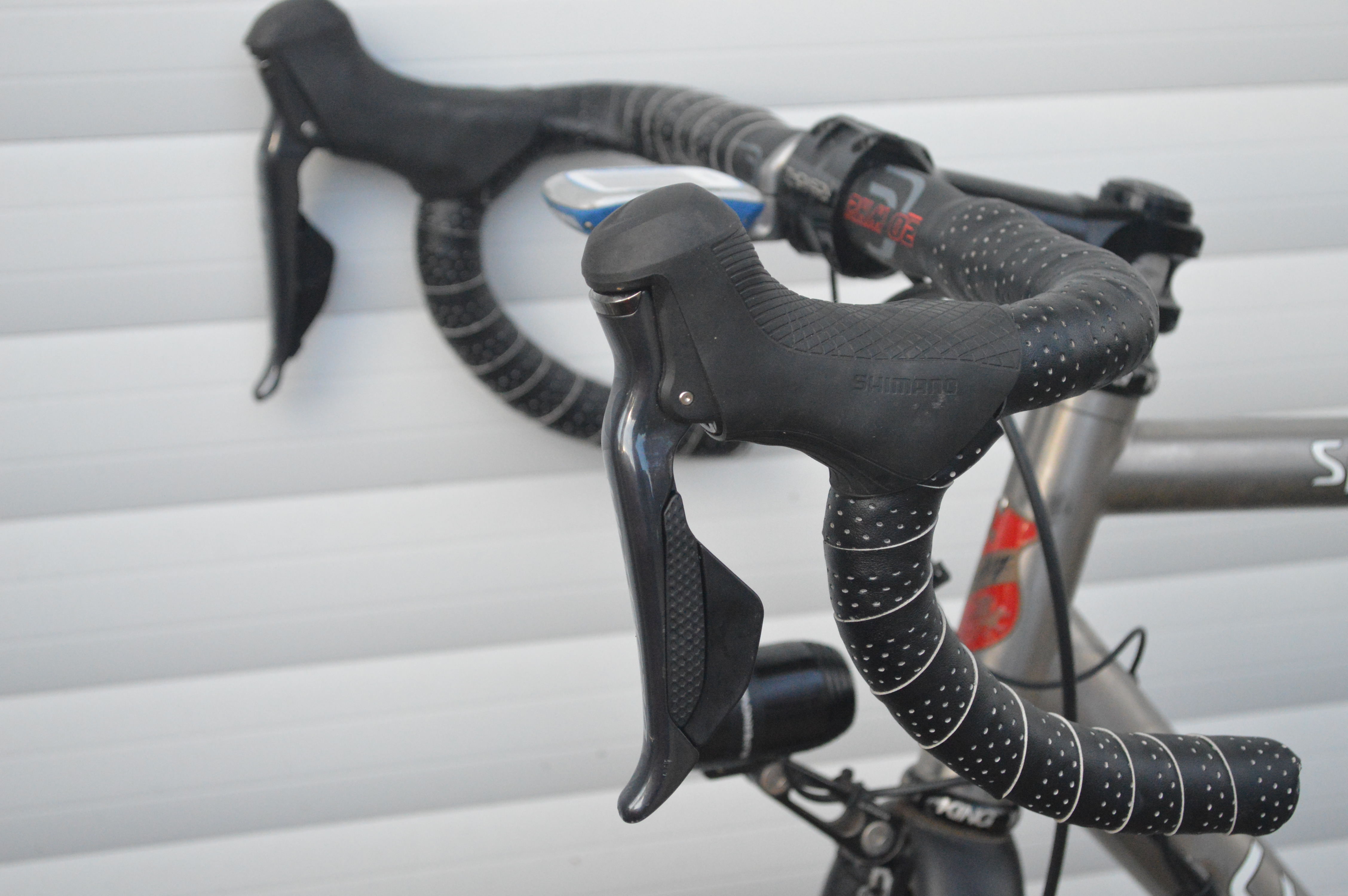 One of the great things about the R8070 levers is that they have a couple of buttons on top of the hoods that you can select to either change gear or change the mode on your Garmin. Not that I can actually do this as I don't have a Bluetooth interface or compatible Garrmin, but it's a nice feature anyway. In addtion, since the 6770 levers, Shimano have made the shift levers a lot bigger and more positive. This is a big improvement as the 6770 levers are a bit small for use with thick gloves.

Frustratingly, the bike didn't work properly and the green warning light kept flashing whilst riding. There was no consistency and it happened at random. After much faffing about and swapping of mechs and shifters, I found the issue to be the battery holder. I had a spare one so I swapped that out and the problem has gone away.

Another thing that happened this week is that I managed to pick up a piece of debris in between the front tyre and mudguard that ripped the mudguard off it's mounts. As the Lynskey has a long fork, I designed and 3D-printed a replacement in ABS plastic to replace the thin alloy sheet one I fashioned a couple of years ago. The new mount works well and is much more solid that the old one. You can see it behind the mount for the front light in the photo below. 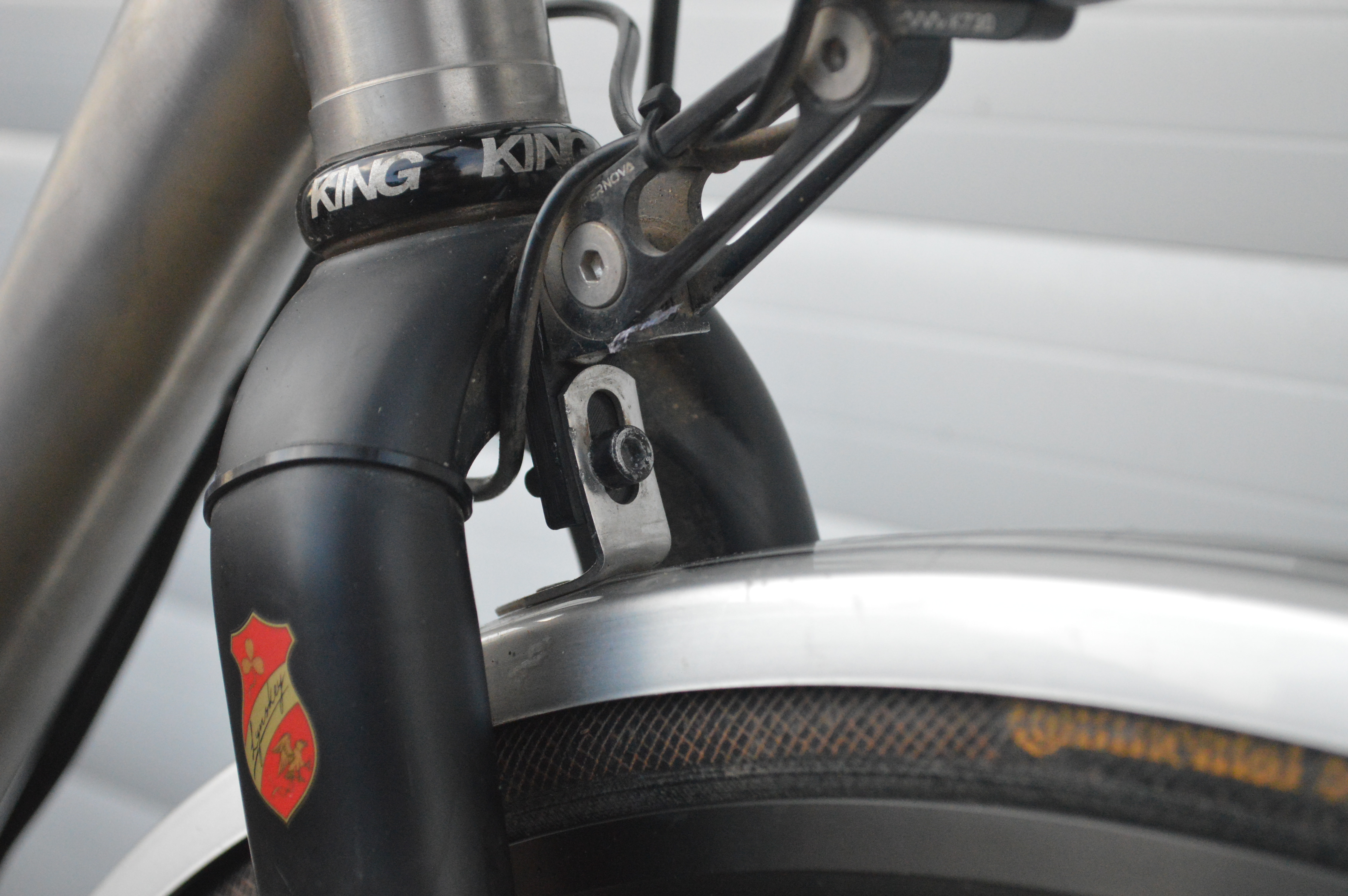 The final thing swapped over the summer was the 6600 crankset for a 6700 compact crankset. The main driver for this is that I'm getting old and don't have the grunt to push over a 53/39 during the winter. A second reason was to match the 6700 Stages power meter that I bought a while ago. I'd already sent back my Gen 1, so was a bit surprised that the Gen 2 replacement went the same way over the summer. This unit was a bit of a disappointment as I'd only done 25 miles on it. It ate 3 batteries in 50 miles so I returned it. Stages were really good about it and sent me a brand new Gen 3, no questions asked. So far so good with the new one. Just a shame that the 105 doesn't exactly match the appearance of the 6700 crank. Not exactly the biggest problem though.
Top

Hey,
With all the upgrades did you drop much weight off the bike?
Looking at getting one but conscious of weight and have been riding a Spec Tarmac Disc for the last three years but nervous this would feel very different and not as responsive.
Cheers
Top

It's fractionally lighter but not enough that I notice out on the road. Performance wise though, the upgrades make an enormous difference to how the bike feels, especially the wheels which don't flop about like the Mavic rims. I've been really impressed with the brakes which took a long time to bed in but have so much modulation and power compared to the V-twin. I'm not so impressed with the Conti GP All Seasons, they just don't seem to give much grip in the wet.

Depending on which Tarmac Disc you have, I wouldn't expect the Lynskey to be lighter, but it sure is comfortable to ride..