I'm doing something very similar (forgive the slightly out of focus picture): Wow. That's creative and different. Is there a reason for modifying the Enve fork over buying a new one with eyelets?
Top

All the forks that I could find with eyelets were cross forks, which were too tall for what I wanted to do.

The forks in the picture are the "Road Disc" model, so standard 367mm axle to crown height, tapered steerer and of course disc mounts- but no eyelets, so a bit of work+epoxy later we now have all the requirements answered.
Top

Fair enough, those Enve forks are pretty sweet. My Lynskey forks are a bit tall, but I think the Sportive was designed with that fork in mind. One thing: Is there a hole on your fork crown for the mudguard attachment and light bracket?

Having seen this I might epoxy on some method of attached the dynamo to the right fork leg. I hate cable ties.
Top

There is no hole on the fork crown, so we've epoxied a fitting there for the mudguard to attach to: I'll mount a light on the bars.
Top

Deev wrote:Thanks - it has turned out better than I thought. It's put the pleasure back into commuting!

I weighed the bike today. All up with the saddle bag, light and mudguards as you see it above it's almost exactly 28lbs. About the same as my first proper bike, a GT Talera! Quite a lot, but I can't see many areas where weight could be reduced. Swapping all the bolts and rims would probably save 250g. In the name of reliability, I'll live with it!

Well, I'm sure you always knew it wasn't going to be light, what with the ti and your mods,eh? But I don't think the weight is important ...
Top

Yes, I didn't think this was going to be a fly-weight race bike, and no bike is going to be waifish with lights and mudguards fitted. In the size I need and with my weight I errr on the side of caution too.

The Lynskey Sportive frame is surprisingly heavy. I didn't weigh it but it must be approx 4.5lb in the XL size with all the reinforcement for the disc forces.

Compared to a CFRP race bike I think the main areas of additional weight are:

That's a approximate total of +8.25lb. Exotic cranks and bars and the inaccuracy of my scales make up for the rest.

This is an interesting video, the man from Storck claims to have got their disc road bike down to the UCI weight limit! http://www.youtube.com/watch?v=u1JDcW7FYaQ
Top

My estimate for mine is 8.7kg, waiting on a confirmed frame weight though- it's currently being painted.
Top

Which frame is it? 8.7kg is seriously light for a disc-braked winter build.
Top

EDIT with mudguard in place (albeit being held by Ryan, the builder): 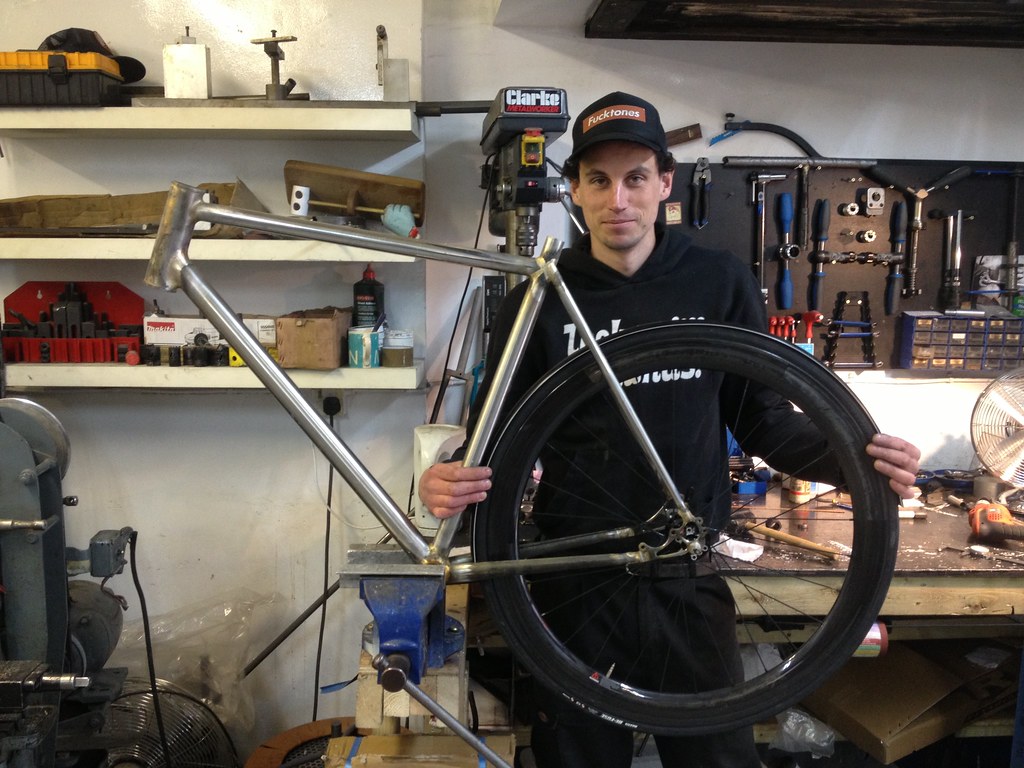 That's a really great looking frame. Love the rear dropouts! Have you included provision for internal hydraulics too? That would be a feature I'd like to have on my Lynskey.
Top

Hah- I wanted them, but Ryan resisted fiercely due to the pain that internal hydraulics would cause any mechanic having to work on the bike.

Initially the bike will be running 6770 shifters to TRP HY/RD calipers, as the R785's will be here at year end at best.

I'm just waiting for the 6870 GS rear mech to come into stock at the moment- Rose estimate 6 weeks. It'll be a bit of a mongrel for a while I suspect.
Top

I rode down to see my mum on the Lynskey last week and halfway this happened: It must've gone after hitting a bump or something because the first thing I knew about it was when the rattling of the clamp got worse and worse and WORSE. Scary really, as there doesn't seem to be a great amount of material where the fracture has happened.

Oh well, should have bought a Thomson in the first place, which is what I'm now going to do. Silver or black, X2 or X4, decisions. Black X4 I think. 4 bolt stems are my new best friend.
Top

Shame the stem broke (that fast).

I would go for a X4 in black too!
Top

I've finally got round to fitting my X4 stem, looks a bit more industrial than I thought it would, but it suits the bike.