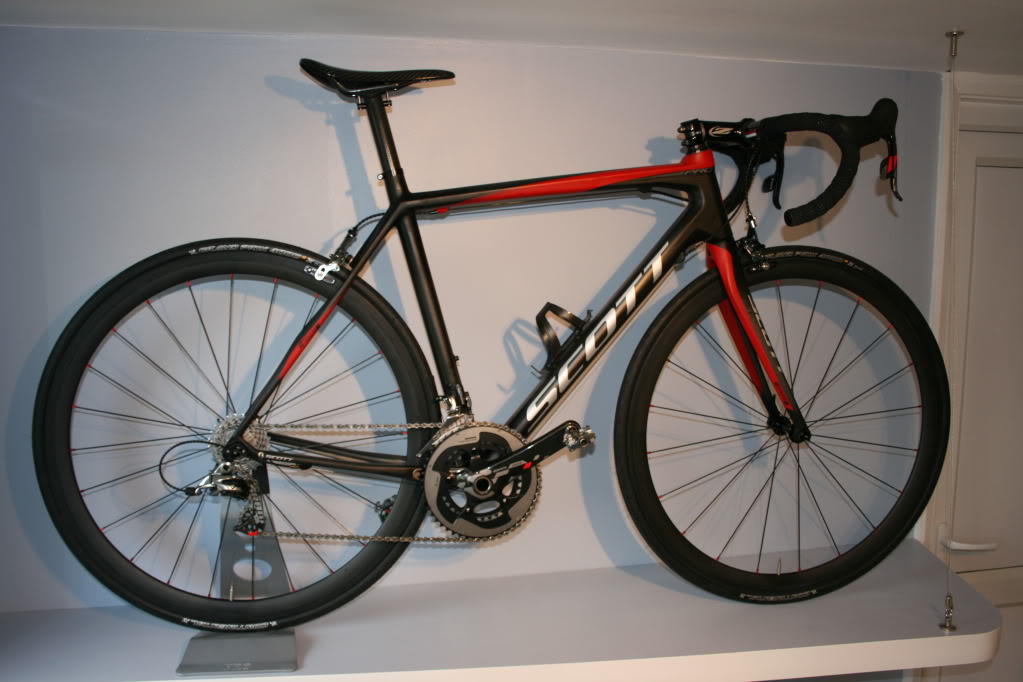 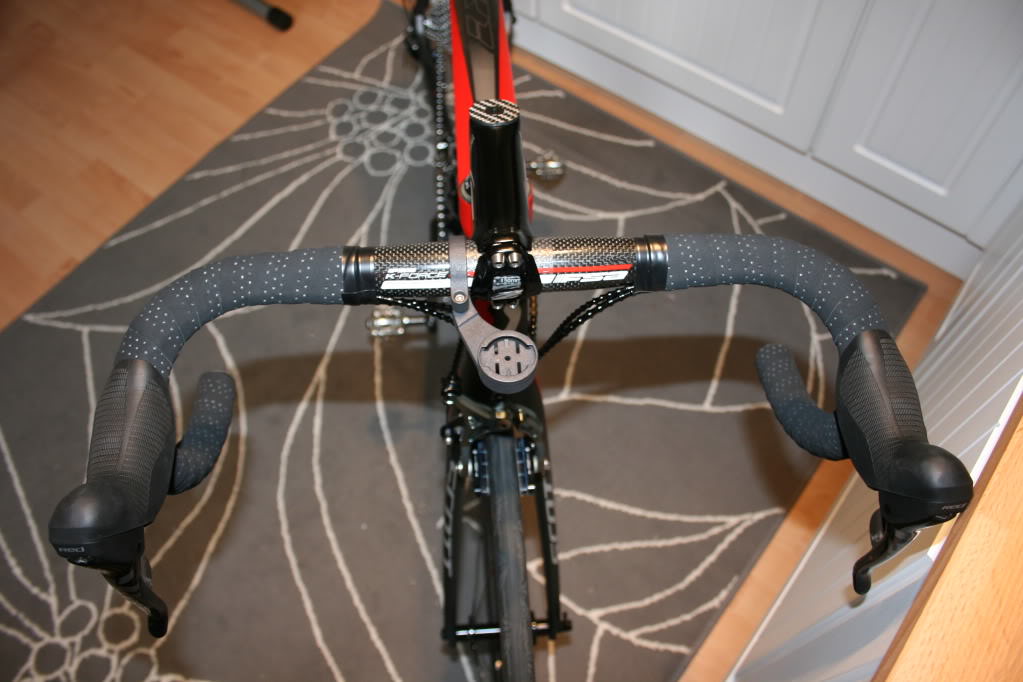 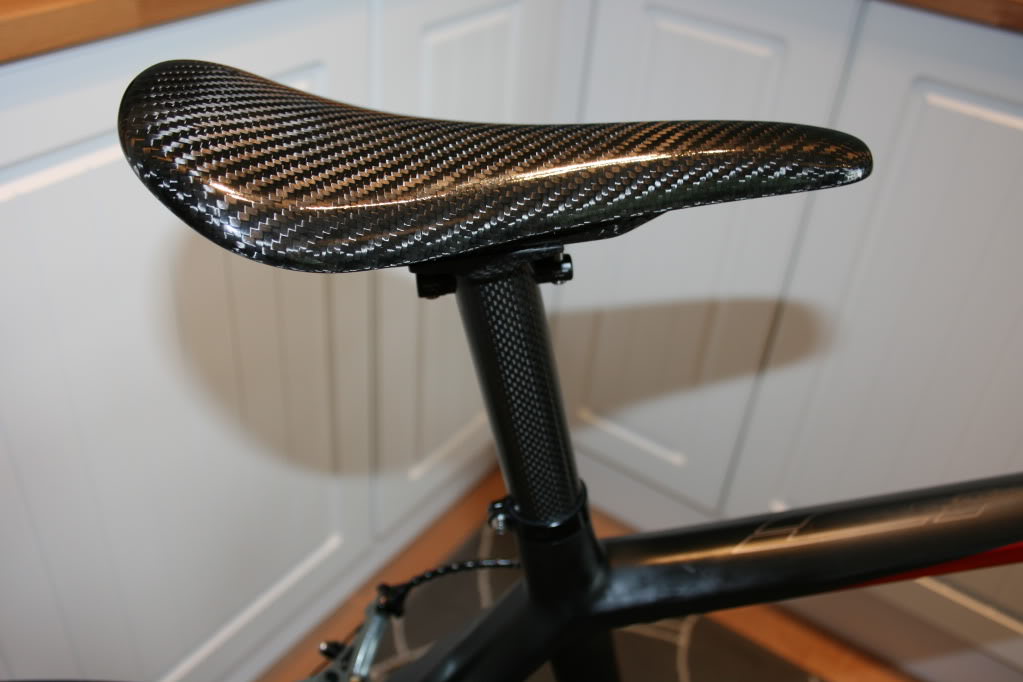 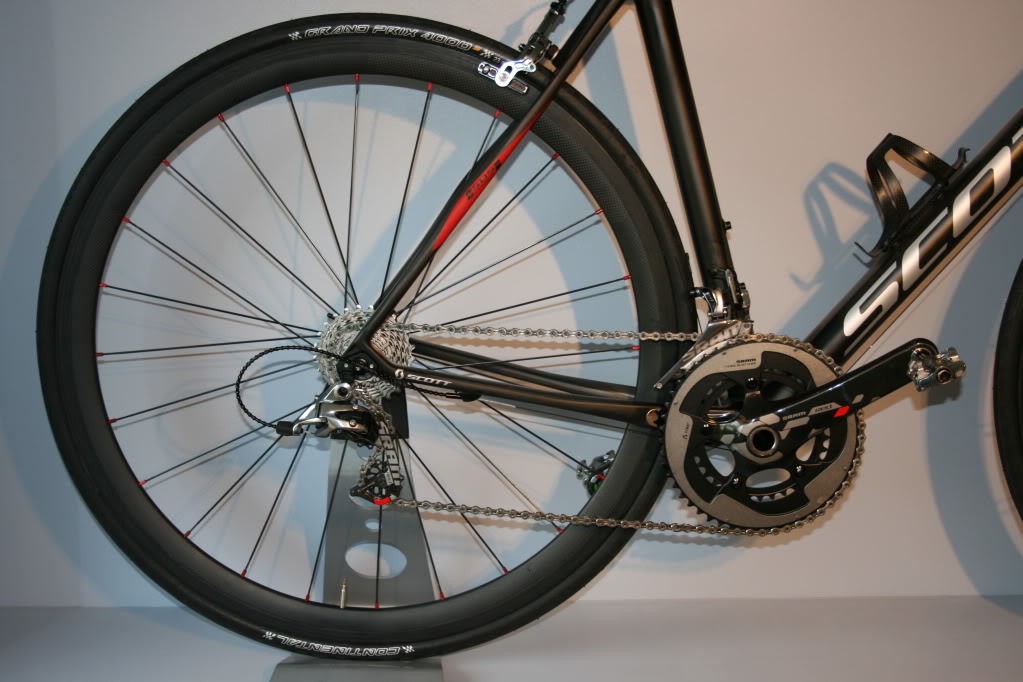 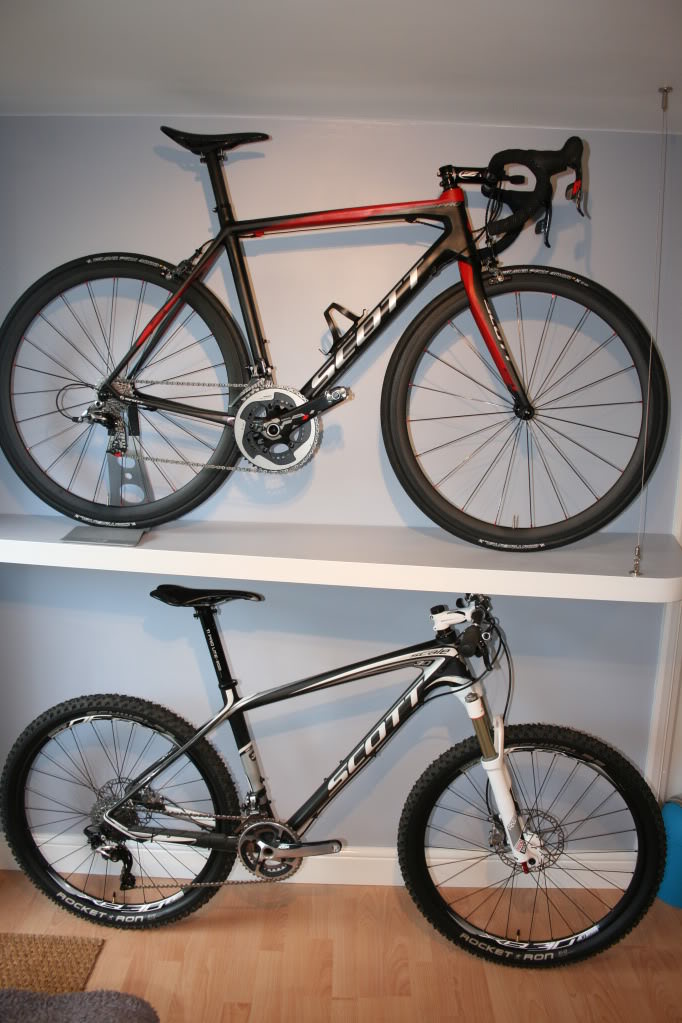 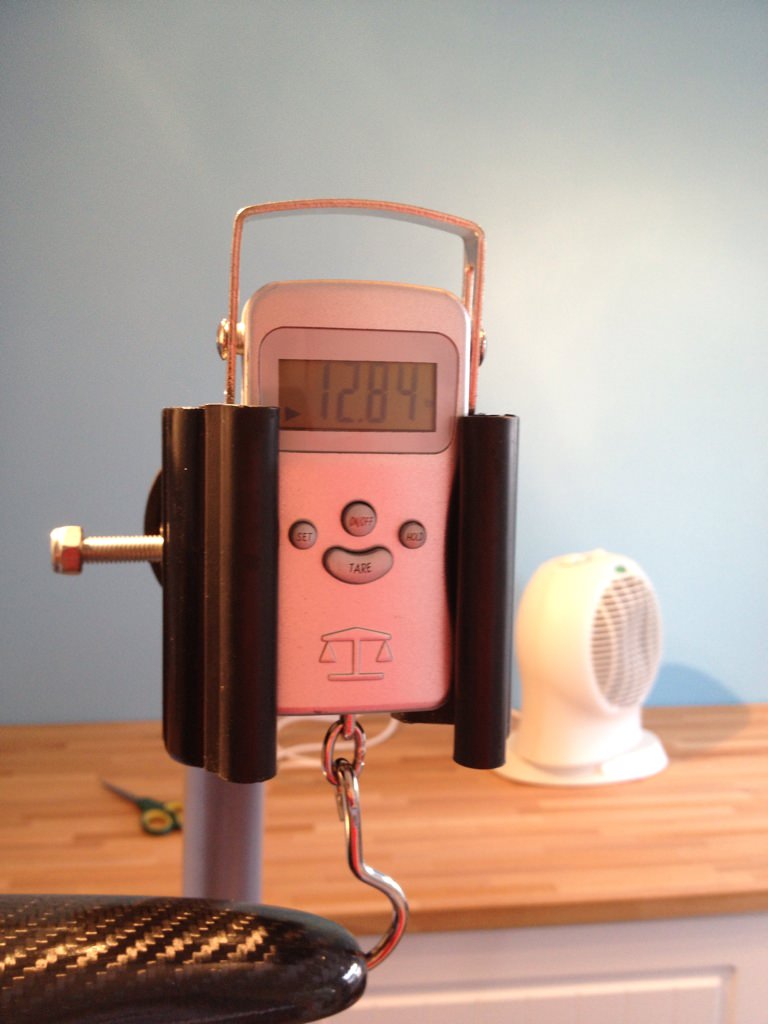 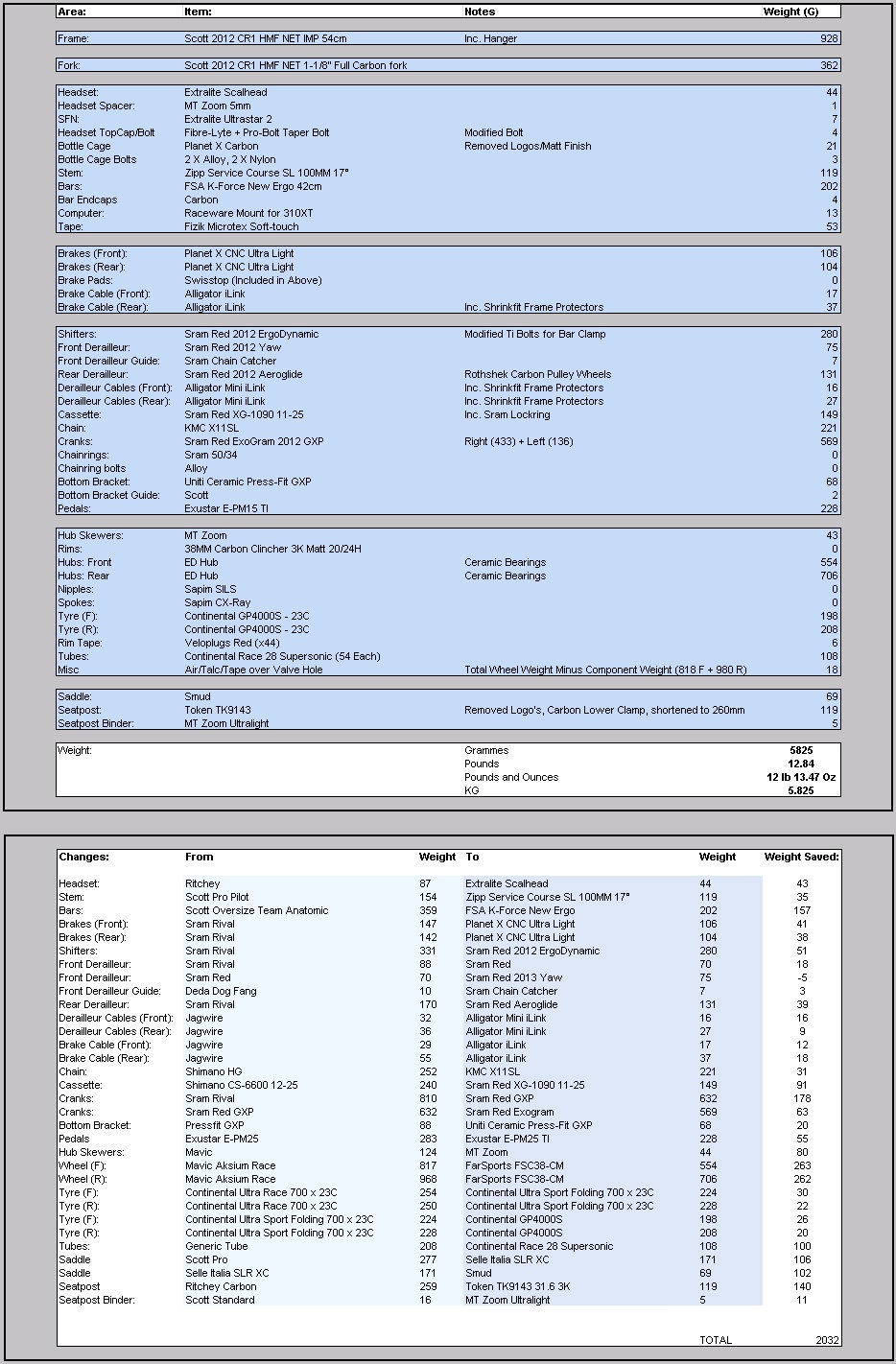 Background:
Been a Mountain Biker since 1988, raced and generally enjoyed it all through my teens, however, Uni and Women made me give up around 1998, got back into Cycling around 2005, bought my first road bike (Trek 1000) to use on my Daily Commute c.32 Miles. Bought a Scott CR1 Elite in 2010, loved it, however it developed a crack in the right seatstay near the dropout, so got a warranty replacement to this current model, as a winter project, I decided to rebuild to go sub 13Ib.

Build:
The build is based on the following principles:

1. Budget/Value for money i.e no £1K spend on an individual component, when a £300 will do the same job for a similar weight/performance ratio. I think it’s called bang for the buck.

2. My riding is generally when I can nip out for a few hours, rather than long days in the saddle. I also Run a bit so need to split my time between that and the 3 kids and the Missus. I would like to do some Races again at some point in the future.

I know its pretty vanilla for now buildwise, but I would like to go down the lines of tinkering with more components, get into making things out of Carbon, more dremelling, however I do prefer the finished/polished look more than agricultural type of look, also, it’s all about the detail and getting things just right.

All weights on the build list have been verified when the build was in pieces.

First Ride:
First ride is a misnomer, I have ridden the frame before, however the re-build meant that pretty much every component got replaced, changing the ride in most regards

Initial impressions were just how light this is in comparison to build 1, the front end feels extremely light, however, the feeling of acceleration and speed when you put the hammer down is amazing, having lost over 750 grams from the wheels is very noticeable.

Only real issues where with the Mt Zoom seatclamp which didn’t appear to keep the seatpost tight in the frame, think it is bottoming out on itself and not allowing enough clamping force to be applied. Will Fix with Dremel or swap out for the original until I find a light one that works.

Also, having a few issues with the gears, might be the combination of an old-ish chain on a new block and chainrings, will swap out if it persists.

Very nice! I just bought a set of those Farsports clinchers.....do you like yours? The weight is very impressive.
Mosaic RS-1
http://weightweenies.starbike.com/forum/viewtopic.php?f=10&t=138478

When I see one of those saddles I always wonder how much cycling the user actually does. And what is it about your body or your cycling that makes you think you need an in-line seatpost?
Top

Valbrona wrote:When I see one of those saddles I always wonder how much cycling the user actually does. And what is it about your body or your cycling that makes you think you need an in-line seatpost?

Seats like the SMUD flex a good amount. For a heavier rider they may flex more than normal saddles. If you have nice bibs with a quality chamois they may be just as good as a seat with padding.

Personally wouldn't put up with a seatpost clamp that doesn't work just to save 11g tho... I'd need 2 bottle cages too, but this is your bike, not mine!

Valbrona wrote:When I see one of those saddles I always wonder how much cycling the user actually does. And what is it about your body or your cycling that makes you think you need an in-line seatpost?

Thats a fair point, however, will be riding it twice daily for approx an hour each time during the commute, and for upto 4 hours at the weekend. It's fair to say most parts on the bike except for the obvious are being tried out at the moment, but in particular the Smud seat, which was purchased following on from many positive reviews for price/weight/suitability to bums that like SLR saddles. If it doesn't work I will swap it out for an SLR.

Awesome Build! A lot of attention to detail!
Top

LOL wish I could get my CR1 weight as low!

So, it's been a while since I posted this, and am happy to say it has been used almost daily over the last 6 months.

Seat Clamp:
For something that weighs 5 Grams, it has only just passed the test, I have had to re-apply carbon paste, put some tape on the inside to make the clamp bigger as it was bottoming out on itself and overtorque it to get it to clamp it tight enough, anymore issues and it will be binned.

Wheels:
For the price £440 you will not find anything as good as these wheels, still perfectly true, round and as tight as day one, despite me hitting some massive potholes, braking is good, initially some slight pulsing on the front wheel which has gone now, also they tend to squeal if the pads are not toed in 100%
They also eat the brake pads (Swissstop BlackPrince) at great speed, braking in the wet has been good and the dry is superb.
Had one issue with the rear hub, where the DS end cap (which screws into the axle) came undone and started making clunking noise, quickly resolved.

Ride:
The bike being so light does get moved around quite a bit in the wind, especially the wheels, makes riding a challenge, on the upside it accelerates like a ferrari (albeit with me as a morris minor engine), the wheels are noticeable stiffer than the previous Mavics which also aids power transfer.

Very happy with it overall and have not changed any of the components, will continue using it as is, getting the miles in and enjoying it.

Not to be picky but why on earth would you commute on this? Pretty expensive day in the office if you get hit by a car and it's written off, don't you think?
Top

I've never really thought of it like that, in fact, why bother doing anything in life in case something might happen?! I love commuting on this, so smooth, fast and comfortable, however, it generally only gets used in the nicer weather/non rainy days. Currently converting a MTB to single speed/slicks for the winter period.
Cervelo S3 Disc - 6.78Kg/14.15Ib
Scott CR1 - 5.69Kg/12.56Ib
OnOne - Free Ranger - 8.68Kg/19.1Ib
Neon - 15.49Ib - Retired
Top

I only speak from experience. A non observant driver who then drove off lead to a written off Litespeed a few years back! Didn't commute on an expensive bike again.
Top