I'm currently riding a Centurion Numinis XC 4000 29 inch from 2020. The bike weighs 9.95kg without pedals in size M. With pedals, bottle cage and other accessories, the bike weighs 10.5kg, which was a bit too heavy for me. When trying to make the bike lighter and thus more agile, there was almost only potential for optimisation on the wheelset, because the FOX shocks, the complete Shimano XTR and the very light PRC parts hardly offered any potential.
When looking at the wheels, it is noticeable that they are anything but not heavy or of inferior quality when delivered. The wheelset is a DT Swiss XR 1501 29 inch with 22.5mm inner width. The recommended retail price from DT-Swiss for this wheelset is 968€, for which you get an aluminium clincher rim with 18mm rim height and 26mm rim outside width. The wheels have spoke holes in the rim bed, which is why a tubeless rim tape is necessary to run this wheelset tubeless. The hubs are the highly praised DT-Swiss 240 with CenterLock brake disc mount. The front wheel weighs 719g, the rear wheel 832g, resulting in a total weight of 1551g. The wheelset can be moved at a maximum system weight of 110kg.
First of all, I thought about what the new wheelset should be able to do better and what the previous wheelset was already good at and what I would expect from a new wheelset.

Pro: Cons:
The search for a new wheelset naturally led me back here because of the connections to Farsports. In a nutshell: I've been riding Farsports wheels on my road bike for a few years now and they have become the standard on all team bikes in our team. Since a new rim was announced, I was allowed to test it at a reduced price.
The new rim is called FSD29C/T-36-22ULA, which is a 22mm high rim with an outer width of 36mm and an inner width of 31mm. The weight per rim is 345g. The rim is an asymmetric with a hookless construction.

Why it should be exactly this rim:
Farsports leaves nothing to be desired when it comes to the choice of construction. Since I didn't want to invest a lot of money, I chose the DT-Swiss 350 hub, which is not much worse than the 240. I've been using it on my gravel bike for a long time and haven't noticed any disadvantages. In order to be particularly light, I changed from centrelock to 6-hole brake disc mount, as both the hub and the brake discs are much lighter here. The hub set for Boost 110 / 148mm with 6-hole brake disc mount weighs 406g. It is interesting that Farsports allows you to determine the number of ratchets in the freewheel of the DT Swiss 350 hub. You can choose between 18, 36 and 54 ratchets, which in my opinion only changes the sound of the freewheel - anyway I took the 36 ratchets.

The spokes are Sapim CX-Ray spokes, which in my opinion cannot be beaten and are also used in many well-known brand wheels. By the way, 28 of them are used per wheel as straight pull spokes. At the end of the configuration, when asked, I was assured of a weight of less than 1400g, although the new wheelset "only" has a DT Swiss 350 hub instead of the DT Swiss 240s and is much wider than the old wheelset.

Ordered on 30 November 2020 - received on 26 January. 2021 - quite speedy in my eyes, you have to take into account the holidays etc.
Unpacked the wheelset and first checked the weight: 1392g

Here you can see the hugh inner width of the rim.

Here you can see the hugh inner width of the rim.

In this picture the high quality and finish of the carbon rims are visible - perfect.

In this picture the high quality and finish of the carbon rims are visible - perfect.

Widths correspond to the specifications:


I have fitted a Schwalbe tubeless rim tape so that the spoke holes are closed. For now, I'm not using tubeless, but the Ultralight Tubolito tubes. I have fitted a Maxxis Ikon 2.2 tyre. It finally measures the 2.2 inches it should, which is about 5.6 cm. 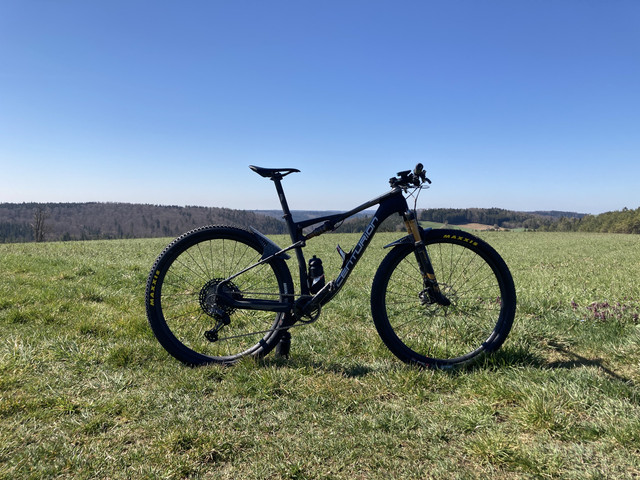 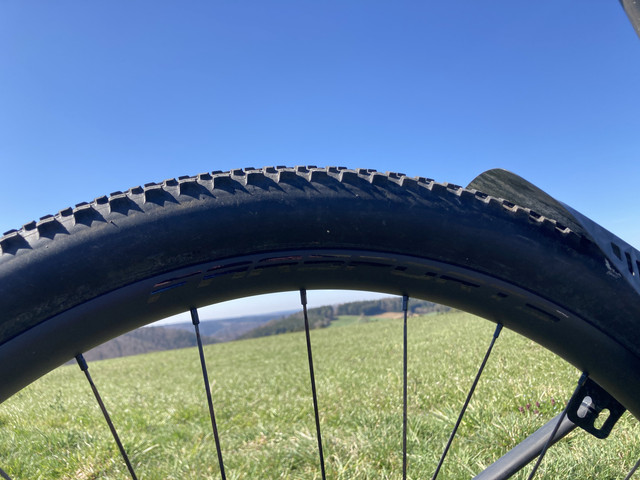 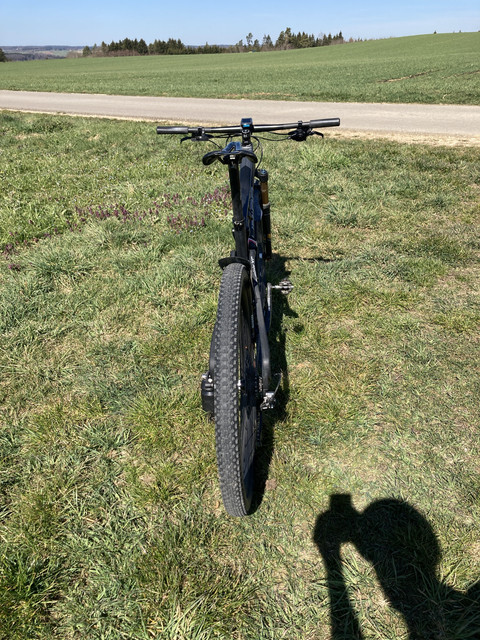 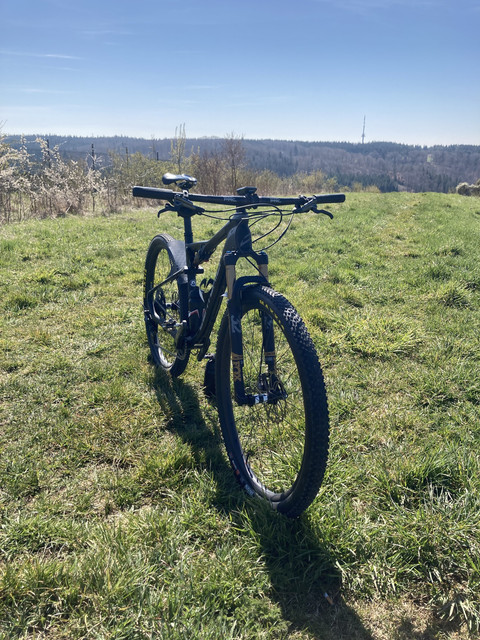 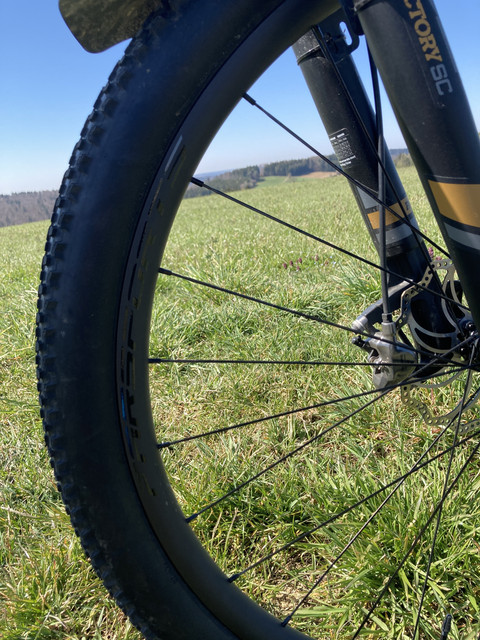 The first test ride was once through the village, when I immediately noticed how easy the bike is to accelerate now, which is due to the lighter wheels, brake discs and tubes. Finally, the tyre width also fits the Fully - with the 22.5mm wide XR1501 rim, the tyres always looked a bit lost in this Fully. Now you can see that the tyres have a much larger volume, which has a positive effect on the handling. Honestly, the bike rides very differently - quote from a teammate who owns the same bike as delivered.

The design of the wheels is also nice, which by the way is always black matt on the Ultralight models and thus fits my bike perfectly. The black shiny Farsports stickers are available on request - I find them very discreet and classy. If you don't like them, you can take them off at any time, as they are only stuck on.
The DT Swiss 350 hubs run smoothly and a quick check in the truing stand shows that the wheels are perfectly centred. I also made a quick trip to the workshop where I had the wheels checked for even spoke tension - perfect!

But now off into the terrain:
If you're wondering where you can ride MTBs so well - of course, somewhere in the south of Germany on the Alb. That's what we did, of course, and tested the wheels extensively, sometimes in gentle and sometimes in rough terrain on the trails for a total of 3 months.
My conclusion on the driving behaviour:
Top - really super, I have fulfilled my wishes from above. The DT Swiss 350 hub is in no way inferior to the 240 hub - at least for me there was no discernible difference and the bearings are still unimpressed despite sometimes bad weather and salt and snow - so far I don't regret my decision to go for the 350 hub.
As far as stability is concerned, there are only positive things to report, because after 3 months and a lot of kilometres on the speedometer, no change can be seen in the centring of the wheels. Admittedly, with a body weight of only 73kg, I'm a bit off the maximum load, but some of my teammates were up to 85kg with the wheels.
The lightweight wheels are not only very good for acceleration, but also for handling. For me, the bike has become a whole lot more agile and light-footed off-road since the upgrade. It's really fun to hop over the root trails with it.
For me, however, the most important point was the handling and the too narrow tyres on the old rim. I'm now rid of this problem and the "wheel well" of the fully is finally well filled with tyres. Not only does it look much better, it also offers much more grip, especially on gravel and loose ground, as there is more tyre tread in contact with the ground. The whole thing simply gives the rider more safety and, in addition to the physically better properties, also a subjectively safer riding feeling. 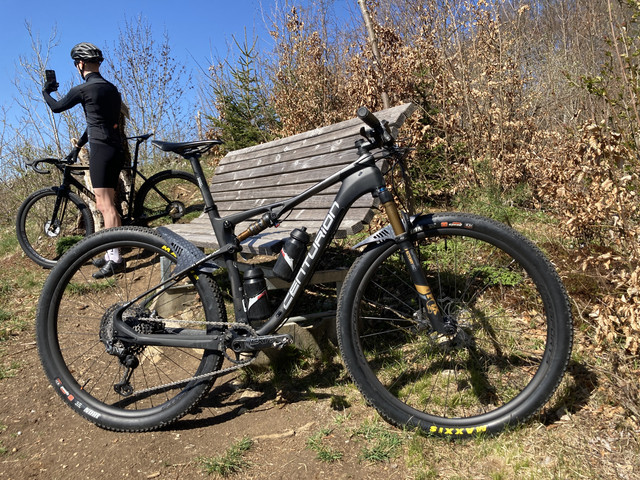 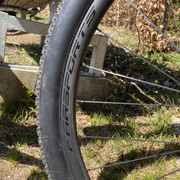 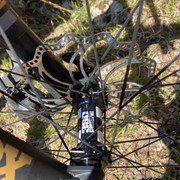 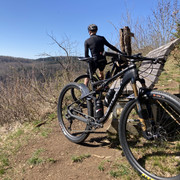 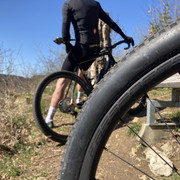 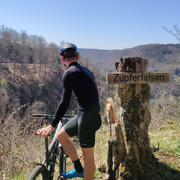 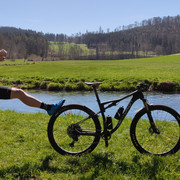 By the way, I was often accompanied by the Farsports Gravel wheels, which had also established themselves in our team. Here, too, everything is still top-notch and these can also be ridden in rough terrain with good riding skills

If you now have a taste for this wheelset and would like to have a look at it online, here is the link:
https://www.wheelsfar.com/asymmetric-29 ... p0074.html

Since today the page is updated and you can buy the new rim directly at Farsports. In addition to the DT Swiss 350 hub, the DT Swiss 240 hubs are now also on sale:
https://www.wheelsfar.com/asymmetric-29 ... p0076.html

There's also a discount with the code "LUCA40FS".

Have fun and here's to a light-hearted discussion!
Top

All options for the ultra-light mtb rims, both 27.5er and 29er available.
Normally build with light weight DT240EXP, 180EXP hubs.