Show Me Your WW Monstercross!

Hex wrote: ↑
Fri Oct 04, 2019 1:41 pm
Lastly, a small mtb frame (if this could be the case with you to get that saddle to bar drop) will also mean that you may need a longer stem and this could be counter productive in mtb maneuverablility. A longer stem may make the already "slower than road to react" mtb even slower. So maybe get the same saddle to bar drop, but don't try to imitate the reach as much.

That only matters for newer HT frames, and a change of technique (lean the bike more) can easily overcome it.
Top

Hey Hex, I saw your message last week but for some reason I don't seem to be able to reply to private messages... probably my lack of posts?

Anyway, found your thread here and thought it's probably worth pisting my thoughts here instead.

You asked about using a monster cross bike on road, and I'd say there's nothing to stop you getting a set up that would work well on road. I've been using mine on plenty of road rides this year with a set of 38mm gravelkings (slicks, not sk) on stans crest rims and it's definitely a bit slower than my aero road bike but there's really not much in it. Maybe 2 km/h? I would like to test it sometime with the wheels from the aero bike.

The wheelbase is much longer but the reach to the handlebars is exactly the same as I'm running a 50mm stem. That does make it feel a bit more twitchy, but with the long wheelbase it still feels long and stable. If you are thinking of building one then think lots about the geometry, I used bikegeo.net to get to the same basic position as on my road bike. Just concentrate on reach and stack and then just understand how the stem length and wheel base will affect the handling. The only time I've found it didn't work for me was on a CX race that had a twisty section through the woods when I felt like it didn't turn as quick as the guys on cx bikes around me could. It was fine though.

The hard thing is that you won't be able to test one out, unless you happen to live in Kent (SE England) in which case you could come have a go on mine. So you might end up with something that you just don't like, but I think with a project like this you just have to experiment and accept that you might not get something perfect first time. So I think doing it searching for bargains works well as you can always sell things on and not really lose out much financially. I bought the Superior frame as a bike for £1200 and found that didn't work for me, but I stripped off the XTR brakes and crankset and managed to sell the rest for £850, so not much of a loss. Having said that, every time I've got a new bike it's felt strange at first and taken me a while to get comfortable on it, but I find I just adapt.

I think it's definitely the most comfortable bike I have ridden, I haven't done any long rides on it yet, but it does feel like a bike I could ride all day. I love it, if I could only have one bike it would definitely be the one I'd choose. I can ride anything from 25mm to 2.4inch tyres so with a change of tyres I can go just about anywhere.
Top

I'd also add that you'll probably need to be looking on eBay for a 40t (or more) chainring with a MTB chainset if you go for that. I went for Fouriers which was fairly cheap. Superstar in the UK have some options too. You can probably go for a road chainset but will depend on your bottom bracket width and it it has spacers.

Look at Sheldon Brown's calculator for your ratios. 1x with a SRAM 10-42 cassette gives me a better range than the compact on my road bike, slightly less top end with the 40t. I could get a 42t, but I'm not fit enought to need that!

Your other option is to go for a triple like I did on my first attempt, but 1x is just way better imho. Di2 if you can stretch to that will make a big difference too.

Man.. these are good. Newbie here, and I'll be using some of these setups to rebuild my bike. It got totalled under a car recently, head tube and down tube got fully wrecked, now it's sitting in by the side of the house underneath a outdoor cover waiting to be fixed. So decided to hop on and rebuild the whole thing. Glad I can use some of the setups and see what the general preference is.Thanks all for sharing!
Top

I started building something... 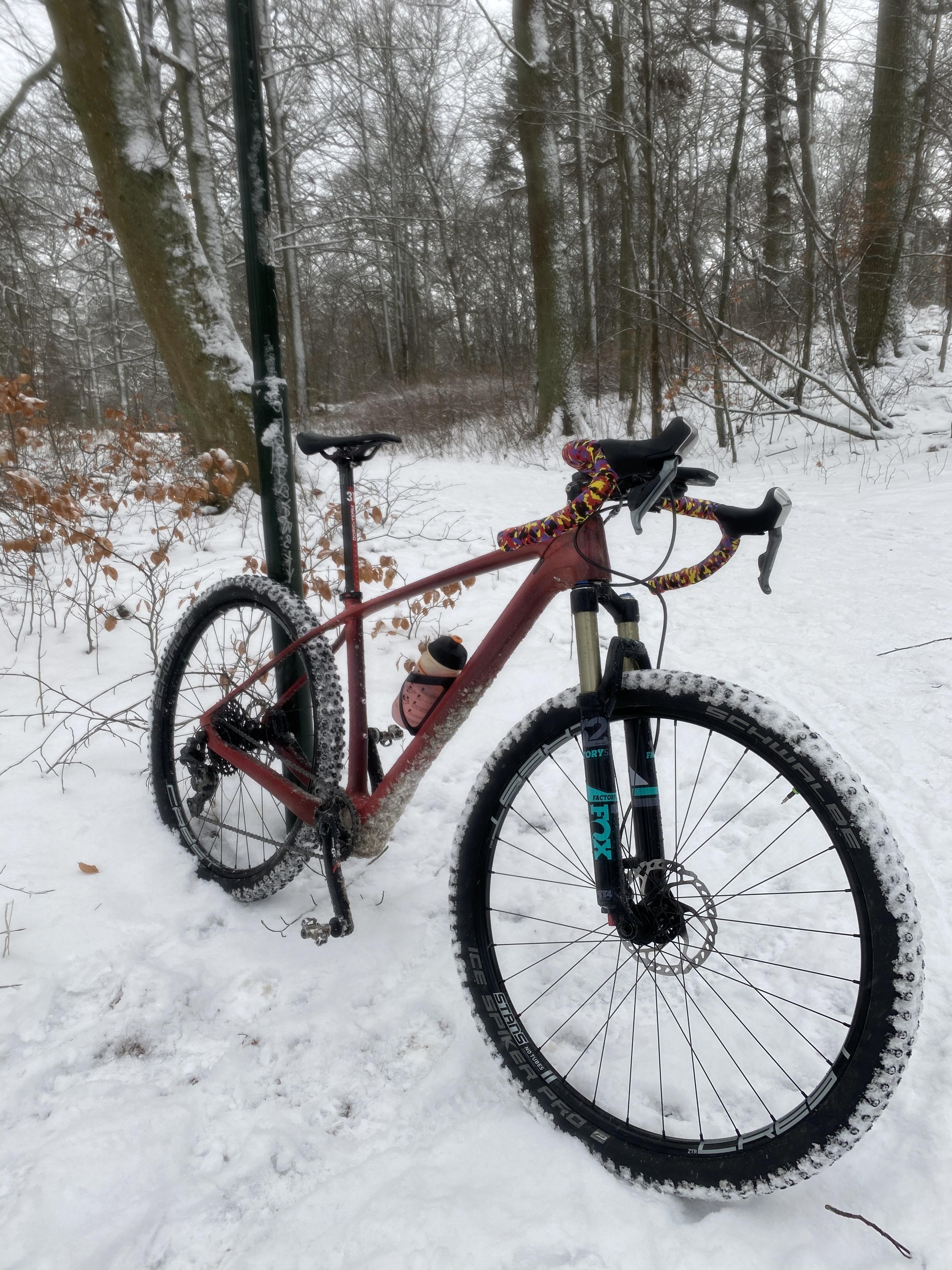